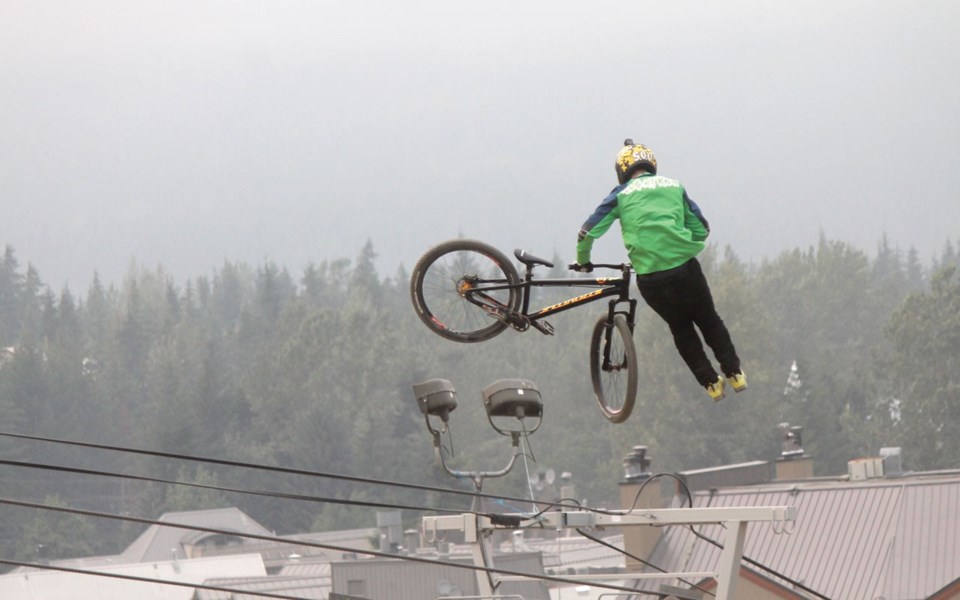 Nicholi Rogatkin let one opportunity to claim the Triple Crown of Slopestyle slip through his fingers in 2017.

In position to try again, he was determined to give his best and, fate willing, conquer Red Bull Joyride at Crankworx Whistler for the first time. Rogatkin did just that, stomping not just one but two runs on Aug. 18 to become the first rider to secure the Triple Crown of Slopestyle—and the accompanying $25,000 bonus.

"Last year, I had the perfect preparation. I was stoked on my run and both runs just had a little mistake in there," he said. "Slopestyle is a game where there's a lot of jumps out there and it's so easy to be on point in the run and then it goes wrong so fast—a little gust of wind or a slipped pedal.

The American was the lone competitor to crack 90 the first time around, scoring 92.75 on his first attempt. However, 2016 champion Brett Rheeder recovered from a first-round crash to score a 94.50 on his second attempt to put the pressure on Rogatkin. But cool and collected, Rogatkin managed to further refine his run and post an eye-popping 96.50 and claim both the event victory and the Triple Crown.

"The judges rewarded Brett's run over my first run because his had more technicality," Rogatkin said. "I just had to add a few more technical things, so I added a couple no-handers in there onto the last whale tail and that's what put the judges over the top, so I'm stoked on that."

After landing his incredible second run, Rogatkin had a good feeling.

"I knew that it was possible, but the vibes out here on this course, it's just so difficult," he said. "I was the last guy to drop. It was a once-in-a-lifetime opportunity, so there was really no choice in my mind besides making it happen."

After a fifth-place finish in Rotorua to start the season, Rogatkin reeled off three consecutive wins, including on back-to-back weekends in Innsbruck and Les Gets in June.

"It's unimaginably tough, but my motivation is extremely high. I'm so pumped to push this forward. Mountain biking has made my life what it is so I'm just trying to do what I can for the sport and having some pretty amazing moments on the way," he said. "That's why it was possible for me to win those three events in a row, because I've been riding my bike since I was five years old and I never dreamed of a day where I would be competing for a world title. It's rad."

Despite Rogatkin winning three of the four events, Rheeder accumulated more points than his rival over the course of the season after winning in Rotorua and taking the runner-up position in the three ensuing events to take the overall world tour crown.

"Brett is a hell of a competitor. You can just tell by today, he's so consistent," Rogatkin said. "He's such a heavy competitor, having such a massive crash in the first run and then acting like it never happened and making that second run happen."

While Rheeder was glad to take the tour title, he couldn't help but feel it was a missed opportunity to take his second Joyride win.

"I screwed up a couple things on my run," Rheeder said. "He was able to go up and improve on some things from his first run and bump me down."

While Rheeder was clearly disappointed, he said he was proud to push the envelope by pumping up tricks on every feature possible. He was also thrilled with how he responded to a disappointing first run. "To eat shit in front of all these people and then go up and stomp it and land it perfect was the most special moment today," Rheeder said.

German Erik Fedko took third in both the event and the overall tour standings.

In his first Crankworx Whistler event, the 20-year-old took his second consecutive bronze medal as he, Rogatkin and Rheeder duplicated the podium from Les Gets in June.

Even with his sustained success this season, Fedko said medalling here in Whistler was a special achievement.

"I can't believe it. I'm almost speechless," Fedko said. "I'm just so happy to be here.

"It was the best course, for sure. Everything was perfect."