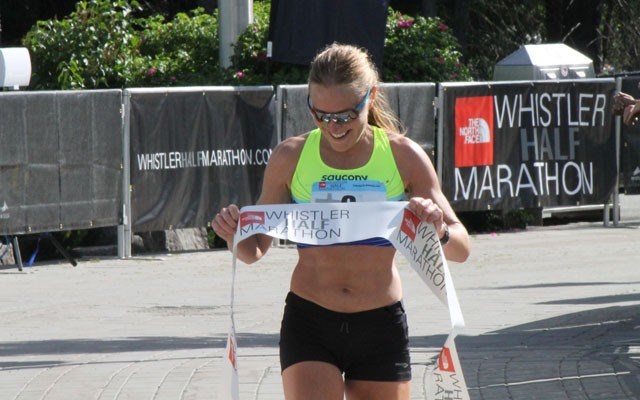 Women's half marathon winner Marilyn Arsenault holds onto the ribbon after completing the race in Whistler Village on Saturday. Photo by Dan Falloon

The capital came up big at The North Face Whistler Half Marathon on Saturday morning.

Three of the four overall winners hailed from Victoria, including both 21.1-km race winners in Jim Finlayson and Marilyn Arsenault. Both of the 10-km winners are no strangers to the podiums - Catrin Jones of Victoria had swept both races in 2014, while Abbotsford's David Jackson was the half-marathon champion last year.

Jackson now holds both course records for men, as he smashed German runner Jannick Gerland's record, set last year, by two minutes and 43 seconds with a time of 43:04. His half-marathon mark, set last year, remained safe as Finlayson's time of one hour, 11 minutes and 14 seconds was nine seconds off Jackson's pace.

Finlayson said everything set him up well for a good run, from his own well being to the weather, which was on its way to being a scorcher in Whistler.

"My body felt good today," said Finlayson, who finished 1:11 ahead of Arya Bahreini. "I like the warmth as well. It's really nice to run in the warmer weather.

"It's early enough that we're not getting the real heat. The muscles just feel a little bit looser."

The Victorian runners all acknowledged there are more ups and down included in the course, with Finlayson calling it "the most technical road race (he's) ever done."

"I didn't prepare (for the hills)," she said with a laugh. "Honestly, I didn't know how hilly it was. The hills definitely were challenging. By 12 km, I definitely felt how hard I had gone in the beginning. I just ran steady up the hills and tried to use some of the downhills to make up some of the time."

Jackson said in the lead-up to the race, he was weighing which distance he should complete. After running a half in his hometown last weekend, though, he opted to tug the reins slightly and go into the shorter distance instead of going all out to launch a title defence. He was in good enough shape, though, to break out to a lead early on and win the race by well over four minutes.

"I wasn't feeling like I was ready for another (half)," he said. "I decided to do the 10 km, but it's still a very tough race because you've got some of the big hills."

Like Jackson, Jones has also been pounding the pavement plenty recently. She ran in the Canadian Long Distance Mountain Running Championships and full marathons in Calgary and Ottawa in May alone, but still had enough left in the tank to come up for this home-province race.

"I recovered quickly, so I was pretty happy with how things went," she said. "I do train half trails, half road and I do target a lot of hill running. I prefer something like this that's a little more varied."

Full results are available at www.racedaytiming.ca.