VIDEO: Never too old to go paragliding in Pemberton 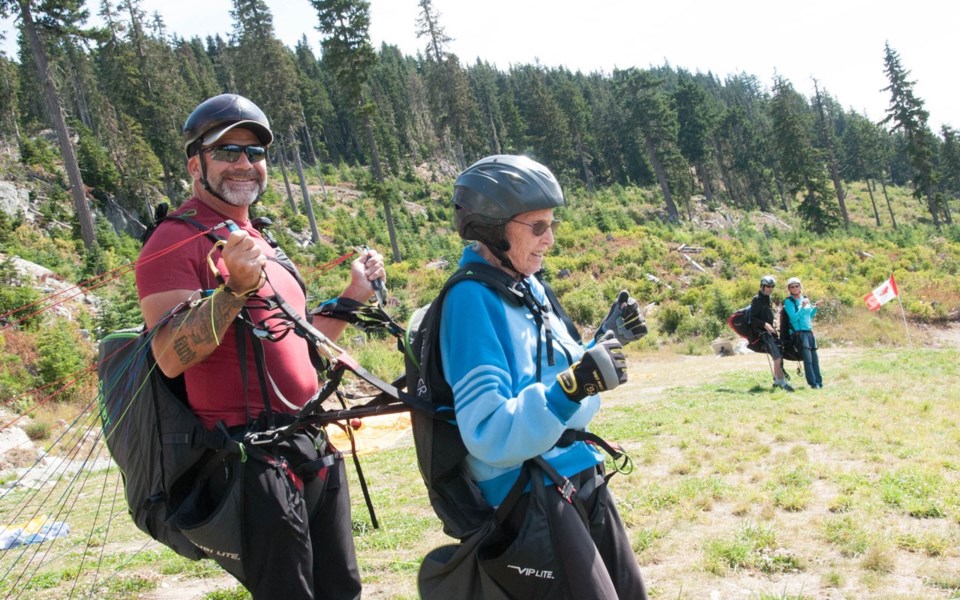 Guy Herrington and Jean Spierling prepare to go on Jean's first-ever paragliding flight at the age of 92 on Aug. 16. Photo by Ricardo Coral

When attractions market themselves as family fun for those aged two to 102, you generally get the sense it's a little bit tongue in cheek.

But Guy Herrington and Sea to Sky Paragliding take that approach seriously as Herrington has personally flown guests with an 85-year age span-from the youngest at age seven to the oldest at 92-after piloting California's Jean Spierling earlier this month.

On Aug. 16, Spierling and her daughter, Carol, took a 30-minute flight around the Pemberton Valley as part of their vacation excursion.

"It was super. I'd been parasailing before, but you're attached to a boat. But this, you were free, free in the air flying like the birds. It was wonderful," Jean said.

On a prior trip, the Spierlings were at Jackson Hole, Wyo. and they observed people paragliding from the tops of the Tetons, thinking it would be something they'd like to try.

"We thought, 'Wow, that looks like that would be exciting.' However, with our timeframe and the scheduling, we weren't able to do it," recalled Carol, who lives on Hawaii's Big Island. "Once we decided to come here, I thought, 'I'm guessing they do paragliding there. They're tall mountains and it's a pretty outdoor, active place.'"

Before the trip, she came upon Sea to Sky Paragliding and connected with owner Guy Herrington. The Spierlings met with Herrington at the Beer Farmers to get acquainted with the equipment the day before their flight.

"Mom wanted to really see what the rigging was so she felt comfortable. She has some physical [ailments] where she can't lift her arms over her head, and this and that, so she just wanted to make sure that she would be comfortable doing it," Carol said. "[Herrington] had the setup, the rigging and everything, the harness, and was able to put her into it and give her some practice runs, which was super helpful, so she knew what to expect."

Herrington added that he wanted to meet the Spierlings before taking them up, ensuring that Jean had the right amount of strength and agility to fly successfully.

The next day, the Spierlings went up to the launch point, which Carol described as another highlight of the trip.

"We drove up this super steep, rocky road to the takeoff location. That was a great experience in and of itself," she said. "When we went to Jackson Hole, [we saw] how easy it is to take the gondola to the top, get in your rigging and glide down. But this was nice because it was a little bit more adventurous going up in the truck, going through the four-wheel-drive road."

After revisiting the takeoff procedure, the two pairs, Jean with Herrington, and Carol with her pilot, Paul, were ready to go. After ensuring that the wind was blowing in the right direction, Herrington began the countdown.

"The sail comes up behind and pulls you back, but you have to keep running so that you can keep air in the sail. Two seconds later, they were flying off the hillside, just like that. It was super exciting."

The launch wasn't smooth, Jean said, and she credited Herrington for getting them in the air safely.

"Guy saved our bacon," Jean said with a chuckle. "We ran, and when the wind hit, it almost blew me over. Guy kept on his feet, he kept going and next thing I knew, we were up in the air."

However, the owner said the launch was challenging due to the day's conditions, and Jean did well to adapt to what she needed to.

"There was a bit of sidestepping involved. It worked out really well. She did very, very good," said Herrington, whose previously oldest flyer was 87. "Sometimes the wind doesn't come up perfectly straight. Sometimes, you launch perfectly smooth and it's just a couple steps. Sometimes you have to do a bit of a shuffle to just get under the wing a little bit.

"It was just a little shuffle to the side, the wing corrected perfectly, and she was in the air."

Seconds later, Carol and Paul were themselves airborne.

"The first minute or two is very nerve-wracking because you're amazed you're flying in the air like that," Carol recalled. "Once we got going and we relax and you sit back into the harness, it's just, sit back and enjoy the ride."

While Herrington and Jean floated, Paul took Carol up higher into the sky using thermals or columns of rising air.

"It was nice to have a few clouds, but it was very clear and beautiful, and we could see one end of the valley to the other," she said.

While Herrington flew Jean all over the valley to see sights such as waterfalls, she was most excited to be up in the air at all.

"The best part I think was just flying all over the place," she said. "You're free up there."

Jean, who has raced Ironman events in the past and summited Mount Kilimanjaro, is eager to try again, according to Carol.

"Next time, we know [the experience] and we'll be happy to spend a little bit more time up there," Carol said. "This time, we were both very nervous, but going forward in the future, we know what to expect."