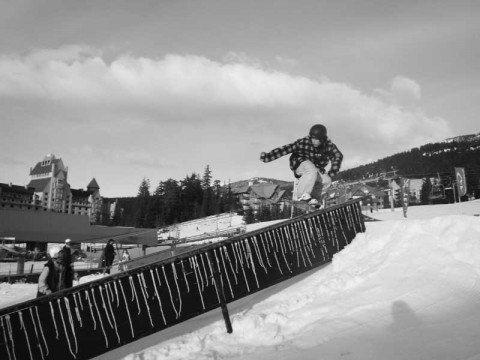 In the face of the biggest winter event in the world, Whistler Blackcomb has made a commitment to ensure that all the other events that make Whistler so fun for skiers and riders keep happening.

There will be a few changes, like fewer Kokanee Valley Race Series races and King of the Rails contests, and a few dates have been moved around to accommodate the Games, but for the most part Whistler Blackcomb's calendar should be comforting for locals and visitors who compete for the thrill of it.

"These (skiers and snowboarders) are the backbone for us, and for us to say 'Sorry, we're too busy to do events for you guys' was not going to happen," said Cate Webster of the Whistler Blackcomb events department. "There are some changes that were necessary to accommodate the Games, basically the entire month of February is blocked off and our staff all have jobs with the Games for that month, but before and after it will be pretty much business as usual, with a few changes here and there."

Event sponsors have also come on board as usual, including names like Kokanee, Telus, Coke, Nintendo, Atomic, Sapient and many more.

The long running and always popular Kokanee Valley Race Series is full speed ahead for this season but with over a month tied up with the Olympics organizers have been forced to condense the number of events from eight to six.

The first event is a giant slalom on Thursday, Dec. 17, followed by events on Jan. 7, 14, 21 and further down the road on March 11 and 18 - the final event being the dual giant slalom and team relay event. Almost all events are GS races this year - there will be no slaloms and only one super G, on Jan. 21.

The price to participate is $30 per race, although you can save $4 by pre-registering at Guest Relations more than a day before the event. You can also pay $126 for a series pass, which works out to $21 per event.

Once again there will be a draw prize for a pair of Atomic skis at every event, and other prizes donated by sponsors and Whistler Blackcomb.

The Park Rider Sessions, presented by Telus, has five events on the calendar this year - the same number as other years. Usually the contests take place once a month but this year the events team has added a race to the Christmas holidays to make up for the event that will be missed in February.

As always the events are open to skiers and riders of all ages. The cost is $26 per event at Whistler Blackcomb Guest Relations, going up to $30 if you sign up on event day.

Helmets are mandatory and other forms of protection are encouraged. Minors also require a waiver signed by a parent or guardian to take part.

Theses events are extremely popular and early registration is recommended, especially in the younger age categories that tend to fill up. For skiers and riders it's a chance to be judged by professional contest judges and to compare their skills and progression against other local skiers and riders. Several pro riders got their start through these contests, including some of the current members of the national freestyle snowboard team.

King of the Rail

Of all events the Olympics have taken the biggest bite out of the King of the Rail, with just two contests on the calendar this year. The reason, according to Webster, is that the King of the Rail events take place in the evening and can impact daily operations before and after the contests at a time when a lot of those resources - groomers, park crews -will be needed on the mountains.

The first event is a pre-New Year's bash on the evening of Dec. 30. It will be followed by an event on Jan. 16. And that's it for the rail jams.

The entry fee is $15 per event, with registration at the bottom of the Magic Chair after 5 p.m. on competition day. The competition runs from 6 p.m. to 7:30 p.m., at which point the athletes themselves vote for the winners in each category after sessioning the rails for an hour and a half. A share of the prize purse goes to the top skiers and riders, and all participants are eligible to win draw prizes donated by sponsors like Telus, Nintendo, Atomic, DNA, Showcase Snowboards and the Glacier Shop.

The turnout is usually good - over 100 skiers and riders - and probably twice as many spectators turn out to listen to music, cheer on friends and enjoy some really good jibbing. Fun for the whole family.

Powerade has stepped up as the new lead sponsor of Whistler Blackcomb's ski and snowboard cross series this year, with two two-day events on the calendar - the same number as last year.

The format will be similar to previous years, with Saturday for practice and seeding runs and Sunday for additional training and competition heats. Skiers and boarders compete against others in their age brackets in heats of two to four, based on turnout.

The first event is Jan. 30-31, making it the last non-Olympic event to take place on the mountains before the Games. The second event will be March 13-14.

This event is open to skiers and snowboarders of all ages, and costs $36 to register for in advance, or $45 on the first Saturday of the event.

Turnout at cross races has spiked recently with the addition of ski cross to the Olympics, and groups like the Whistler Mountain Ski Club, Whistler Blackcomb Freestyle Club and Whistler Blackcomb's own Freeride groups flood the younger age categories. Advance registration is strongly recommended as some categories will fill up.

Helmets are mandatory and other forms of protection are recommended.

The annual Appleton Rum Peak to Valley Race has been bumped back from its usual slot at the start of February to the March 26-27 weekend. The impact on registration has been minimal, according to Webster, with just two open spots remaining for teams.

The race course usually depends on conditions, but in a typical year the start is on the top of The Saddle on Whistler Mountain and the finish line at the Creekside base - a vertical drop over 1,440 metres with roughly 180 giant slalom gates along a 5 km course.

Competitors compete in teams of four with a minimum of one female racer on each team, and the team with the lowest combined two-day time wins in each age category (based on the cumulative age of the racers).

Usually the race sells out the summer before the event, but this year a few spots are still remaining. As well, Whistler Blackcomb also keeps a waitlist for additional teams and for individual racers looking to join other teams that have registered but find themselves short a racer before the event day.

The annual Showcase Showdown will go on as past years but with a different date. The 2010 edition will feature an informal "backyard jam" format on a series of rails, jibs and other stunts outside the GLC - mimicking the informal events that Whistler residents have run out of their backyards and backwoods for years.

More details about entering and qualifying will be released closer to the competition, but naturally the event is for snowboarders only.

The annual Telus Winter Classic weekend raises tens of thousands of dollars for the Whistler Blackcomb Foundation, which funds local non-profit organizations with a particular emphasis on groups and grants that benefit youth. One of the features of the event in the past has been some kind of ski race, ranging from a series of on-mountain races on different types of terrain to the more traditional "guess your time" format. This year the fundraiser is going ahead as usual with a group race, wine tasting, gala fundraiser at the Roundhouse, and more.

According to Webster, regular events will be accommodated this year, like the B.C. Law Firm Championships, various high school race series and regional events with the Whistler Mountain Ski Club - like the Parsons Memorial super G races and Whistler Cup. The annual Mom's Mountain Classic will also return in April.

"By the end of the Paralympics it's a little more like business as usual," said Webster.

In that vein, the annual Telus World Ski and Snowboard Festival is also on the calendar with a full slate of events for skiers and snowboarders - including events that are open to the public - on top of the other music and culture events.