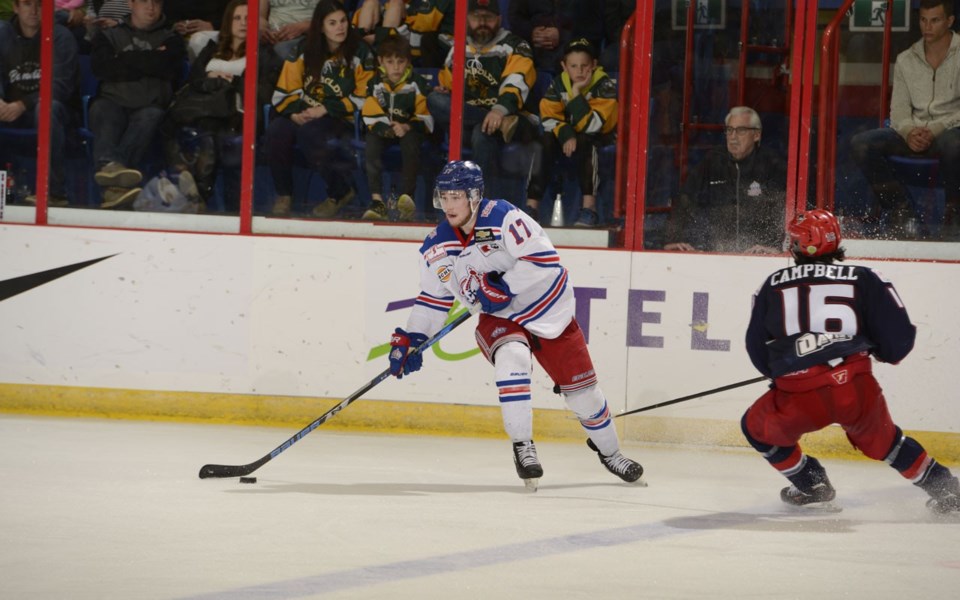 STRONG SEASON Nolan Welsh (left) helped the Prince George Spruce Kings to the second-best season in Canadian Jr. 'A' hockey, as they fell in the national championship final to the host Brooks Bandits in May. <ParaStyle:CUTLINE\:CUTLINE Credit>Photo by Matthew Murnaghan/Hockey Canada

Any hockey player worth his or her salt wants to be out on the ice with a national championship on the line.

And when out there, finding a way to score is even better.

That's what Whistler's Nolan Welsh was able to do for his Prince George Spruce Kings in the championship game of the National Jr. 'A' Championship on May 19. Down 4-2 to the host Brooks Bandits late in the third, Welsh was tabbed to help the Spruce Kings find some quick offence. He converted with 45 seconds to go to make it 4-3, and even though Prince George wasn't able to find the equalizer, Welsh was glad to have made good with his opportunity.

"That was really special. We weren't giving up at all. We gave it all we had and it was nice to be able to score and make the game at least a one-goal difference," he said. "We proved to ourselves that we should be here, we deserve to be in this thing. To be able to battle back like that was huge for our team."

It was the continuation of a strong postseason for Welsh, who is able to raise his game when the contests matter more. Welsh, who turns 20 on June 23, has eight goals in 163 career British Columbia Hockey League (BCHL) regular-season games, but, counting this year's national championship, has 11 goals in 69 career playoff games. Just this season, he had 21 points in 29 playoff games, whereas he posted 20 in an injury-shorted 43-game regular season.

"It was awesome to be able to produce the way I did in the playoffs. It helps with the team doing so well. It's just a lot easier," Welsh said. "For me, I was able to find the net and have success all through playoffs.

"Nothing felt different and I wasn't doing anything different. Everything was working out. I was just clicking with my linemates and I was able to put the puck in the net."

Though the season came to a disappointing end, especially considering the Spruce Kings bested the Bandits 4-2 in the best-of-seven Doyle Cup series between the B.C. and Alberta champions, Welsh is looking back at the many positives from the season.

"It was tough to lose, coming one game short of what you wanted to do all season, but looking back, it was a really good season," Welsh said. "We won the whole league and ended up beating the team that won (the national title) in a seven-game series. We definitely had success this season."

Welsh was also quick to credit the Bandits, who rose to the pressure of hosting a national tournament at home.

"They definitely played really well. We knew they were going to play well going into it and it's what we expected. It just didn't go our way. They're a really good team and for them to be on their own ice, too, was definitely a big advantage for them, but in the end, we fell short," Welsh said.

The Spruce Kings built off a strong regular season in which they led the league in goal differential and placed only one point behind the league leaders and defending national champions Chilliwack Chiefs. But in the playoffs, Prince George rolled, downing Coquitlam 4-1 before plowing through Chilliwack, Victoria and Vernon undefeated.

"It was such a big thing to do, playing against those teams all year. All through the year, it was really close with all the teams," Welsh said. "Beating all those teams the way we did was something special."