Welsh settles in with Bulldogs 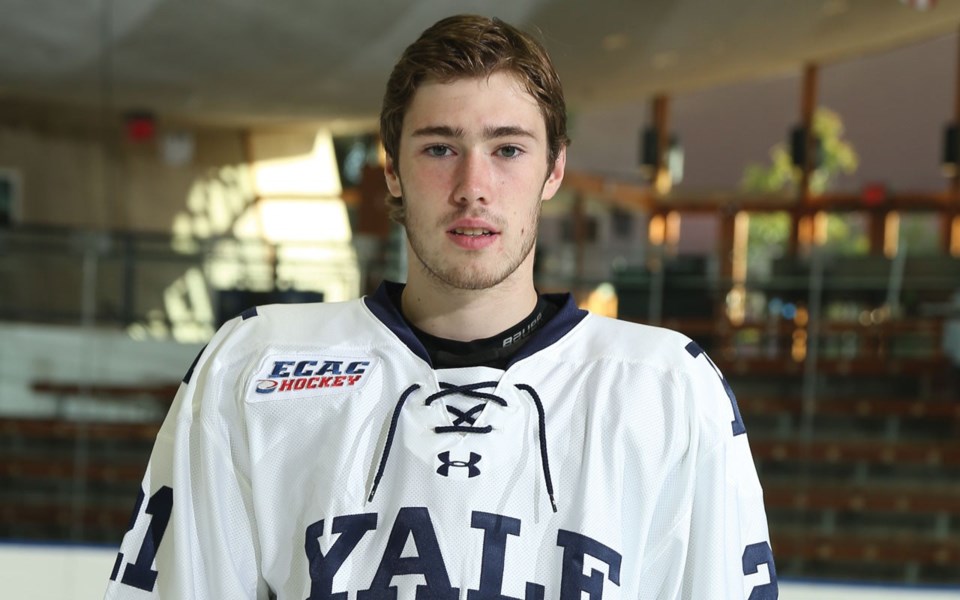 Tyler Welsh is looking for the opportunity to make his mark in the Ivy League.

Being a first-year player, it doesn't look like the 20-year-old will get his shot straight out of the gate, but he's soaking in everything the New Haven, Conn. campus has to offer.

"It's such a storied school with so much tradition. It's a pretty cool experience so far," Welsh said.

The NCAA regular season officially kicked off last weekend, with the Bulldogs splitting a pair of games against Brown University. Welsh was on the sidelines for both, but suited up in the Bulldogs' exhibition game against the University of Western Ontario earlier in October, winning six of 11 faceoffs in a 6-4 win.

Welsh said there's no firm plan for when he could make his debut, but pledged he'll keep working hard in training and will be prepared when his opportunity comes.

"It's kind of tough, but it's a big transition and there's a bigger roster," he said. "I'm maybe not expected to come in and make an immediate impact, but hopefully I can work my way into playing regularly here.

"It'll come as I get more accustomed to the style of play that the coach wants and adjust to the speed and the strength of the players here. I'll just keep working hard in practice and hopefully that will translate into an opportunity."

In an email, head coach Keith Allain said while it's not likely Welsh will play every night, he will get his chance. Allain added he feels Welsh has the skills and mindset to make a mark when he draws in.

"What I have seen to this point is a smart, hard working, competitive individual; someone we are excited to have in our program," Allain wrote. "We think Tyler is a terrific fit for our hockey team and the way we play. We see him as a relentless competitor, a second effort type player but also someone who has a very high hockey IQ. Our expectation is that he will be a valuable contributor to a team that will compete for championships."

Welsh is coming off a season where he was second on the BCHL's Victoria Grizzlies in scoring as they captured their division title. Though he won't be as dominant initially, he's excited for the chance to hit the ice with talented players from top to bottom.

"It's definitely an adjustment from last year and from where I was playing before in Victoria," he said. "It's a lot higher calibre and a lot better players.

"I'm starting to settle in and feel more comfortable here."

Welsh also appreciates the up-tempo style of play the Bulldogs, who won their first-ever NCAA championship in 2013 and are looking to realize those lofty heights once again.

"It's really fast-paced and definitely really, really structured. They have so much time for practice that I feel they have a lot of emphasis on team structure," he said. "It's a quick transition game from defence to offence."

On the academic side, Welsh is focusing on economics and while it's been a bit of a shock to his system to return to balancing school and hockey, it's something he's enjoyed so far.

"Classes are going pretty well. The first couple weeks, it was definitely an adjustment coming from taking two years off after high school to studying here," he said. "There are definitely lots of people here that help us transition into studying, so it's been a pretty comfortable process."