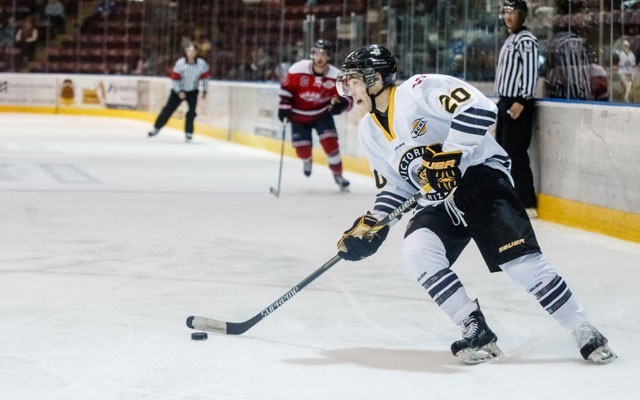 Coming off a season that saw his Campbell River Storm capture the league, provincial and western Canadian junior 'B' titles, Tyler Welsh's first season with the BCHL's Victoria Grizzlies ended a little prematurely.

The Grizzlies missed the postseason by just two points as Welsh's rookie campaign at the junior 'A' level ended with him scoring 10 goals and 30 assists in 54 games as he ended up fourth on the team in scoring.

"It was definitely an adjustment moving up to junior 'A.' It's disappointing for our team this year. We definitely wanted to make playoffs and it's pretty hard to end the season and not even play for a championship," he said. "Our team had a lot of rookies on it so a lot guys are returning next year. I'm looking forward to next year already."

Welsh hit the scoresheet in 24 games this season, and scored multiple points in 13 of those. Many of those came in a pair of seven-game point streaks, one coming in November and the other in January, where the Grizzlies won eight of 10 games before slipping out of the playoff picture with a rough February.

Even though Welsh went through some dry spells, Victoria head coach Craig Didmon maintained the 19-year-old was playing how he needed to, even if the numbers weren't necessarily coming.

"I never worry about Tyler because he always gets chances," he said. "He was playing against the other team's top line for a lot of those stretches in the second half of the season, if not a little bit of the first.

"His goals could have been a little higher, but he played a bit of a checking role as well."

Welsh became more comfortable after being paired with veterans Cole Pickup and P.J. Conlon. Didmon noted all three saw improvements in their game after being placed together while Welsh said being out there with them gave him a sense of how to be successful in the league.

"We started playing really well together and that continued for the rest of the year," he said. "(They showed me) in practice, do the little things right and just how hard you have to work every shift to be successful at that level."

Didmon said Welsh established himself as a legitimate BCHLer, earning more responsibility throughout the season. As a returning player and the top centreman this fall, he'll be leaned on as a leader for the young group of Grizzlies.

"He right away proved he belonged in the league," Didmon said. "He started to really find his way on the offensive side of the game and showed (himself) to be a very intelligent hockey player. The sky's the limit for him in our minds.

"He's very intelligent, but he's also very skilled. Physically, he's still got a lot of growth to come and I just think he's a great player for our hockey club."

Victoria could prove to be a landing spot for more Whistler talent as Didmon said the team is looking at bringing in Welsh's brother Nolan in future seasons. The Grizzlies will hold an identification camp at Meadow Park Sports Centre in July. More information is available at www.victoriagrizzlies.com.