Westerns end up a success 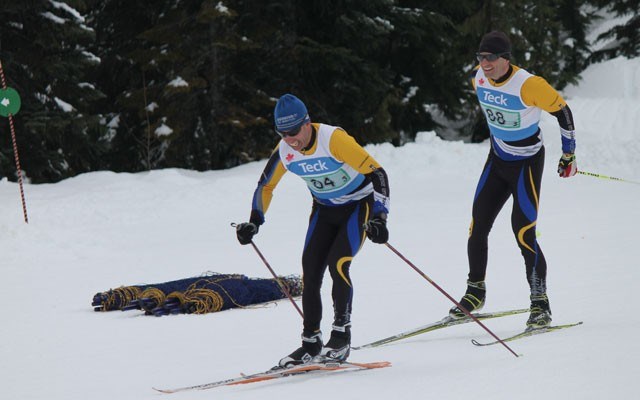 LATE PASS Brian May gets past Keith Hepburn during the stretch run of the masters men team relay at Whistler Olympic Park on Jan. 22. Photo by Dan Falloon

Callaghan Valley XC made the most of its opportunity to host the Haywood NorAm Western Canadians at Whistler Olympic Park from Jan. 20 to 22.

The club welcomed over 600 skiers from all across Canada, as well as some Australian development racers, for three days of winter fun.

Several local skiers held their own against the influx of competition.

In the Buff Sprints on Jan. 20, Benita Peiffer captured the junior girl one-kilometre free win, holding off Revelstoke's Elizabeth Elliott by 3.61 seconds. Meanwhile, in the same event for the juvenile girls, Mila Wittenberg found herself in seventh after topping the B Final.

In the interval classic on Jan. 21, Michael Murdoch captured a medal, taking third overall and first in his age category in the junior boys 7.5-km classic race. Mads Groeholdt, meanwhile, was ninth overall and first in his age group in the same event. In the girls' event, Peiffer took second overall, 8.4 seconds behind Revelstoke's Beth Granstrom.

As for the juvenile boys, Joe Davies bounced back to take an eighth-place showing while Wittenberg was seventh among the juvenile girls in the 7.5-km challenge.

The masters, meanwhile, also saw some strong performances as Claude Prica took fourth just ahead of Sea to Sky's D'Arcy Bloom in fifth. Ted Lawson also hit the top 10, placing eighth. On the women's side, Stephanie Cripps skied to fifth.

The peewee girls, on a 1.5-km circuit, saw some strong local results as Talia Wittenberg took third while Sea to Sky's Bianca Ike was sixth, and Cadelle Roberts and Delphine Gosselin of Whistler were ninth and 10th, respectively.

Among the atoms, Thomas Milburn of Sea to Sky took the win to edge out Whistler's Jesse Thuma on the 0.83-km course. Van McDonnell, meanwhile, was fifth. As for the girls, Whistler's Eva Burgers crossed the line first, while Sea to Sky's Lauren Bloom took fifth and Whistler's Claire Benson ended up seventh. Lastly, sit skier Ethan Hess of Pemberton took the win in the 7.5-km classic.

The weekend wrapped with team relays on Jan. 22.

"It was a really great opportunity for them to race as a team as opposed to constantly racing each other. They were working together," she said.

Michael Murdoch helped lead his team, which also included Tallon Noble and Ian Williams, to the 3x5km junior boys victory, while in the juvenile boys division, Joe Davies' trio with Connor Hobbs and Jordan Bax ended up in fourth. Wittenberg's juvenile girls team medalled, as she took third alongside Jasmine Drolet and Rachel Bates. In the midget girls event, Marlie Molinaro's squad with Katie Thielman and Callie Nagle placed third, while Sierra Pochay-McBain was on the fourth-place team and Alexa Hunter represented the fifth-place team.

In the club relays, the Sea to Sky team of Tyson Ike, Lucas Clements and Tenzin Hoog took third among the bantam boys while clubmates Bianca Ike, Anaik Ferradini and Zadie Waters were second among pee wee girls, as were Sydney Bain, Chloe Gould and Sophia Clifford among atom girls. As for the masters men, Whistler's Dave Burch, Bill Letham and Ted Lawson topped the heap, while on the women's side, Stephanie Cripps, Maureen Harriman and Barbara Turner scored the victory.

Being the first time the club was hosting the team relay, Murdoch wasn't sure exactly what the response would be. As it turned out, roughly 150 teams signed up to give it a shot, creating a few worried moments, but with a few tweaks to start times to try to reduce traffic jams, it ultimately turned out alright.

Complete results are available at www.zone4.ca.