What the heck is wing foiling and why are people doing it in Whistler?

Meet Pepe Krause, the 15-year-old windsurfing world champ and wing foiler who calls Whistler home
May 14, 2021 9:00 AM By: Megan Lalonde 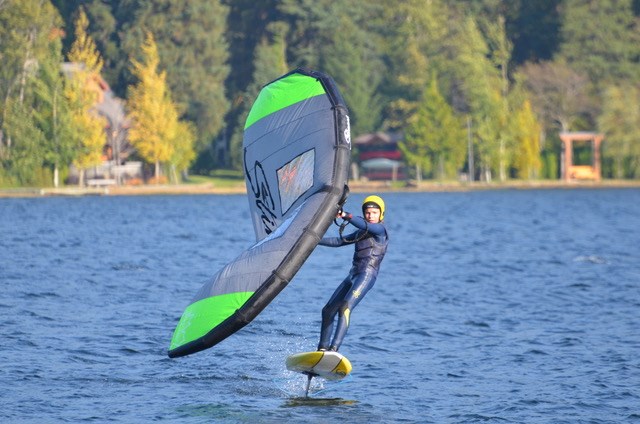 Pepe Krause on gear from Whistler-based brand Stinger Boards Foils & Wings. Already a windsurfing world cup veteran, the 15-year-old is well on his way to becoming a legendary watersportsman.Photo submitted.

It’s now common to see Whistler’s lakes peppered with paddleboards on a warm summer day. But in the near future, you just might see a lot more people standing on boards holding inflatable wind-wings rather than paddles.

One athlete you might spot ripping up the surface of Alta Lake later this summer is Pepe Krause, a 15-year-old Whistler local and two-time windsurfing world champion. Instead of busting out tricks on his windsurfing set-up, lake-goers in Whistler are more likely to see Krause gliding slightly above the water on a foil board these days, holding tight to that aforementioned wing,

When the onslaught of the COVID-19 pandemic shut down windsurfing contests and international travel, “I was really bummed out about that because I was really excited to keep doing the World Cup and the World Tour,” he recalled over FaceTime from Martinique, where he and his father Stephan were docked after successfully traversing the Atlantic Ocean in their family’s sailboat. After departing from France, the pair are sailing back home to British Columbia via the Panama Canal.

“The ocean is really my home. I love it, more than anything in the world, so I started missing the ocean a lot—like, a lot,” Krause said.

It was at this point that Krause was  introduced to a brand-new sport, courtesy of fellow local Steve Legge. A former head coach for the Canadian National Snowboard Alpine & Boardercross Team, Legge is now the CEO of Kahuna Paddleboards, which he founded in 2010, and Stinger Foils, Boards and Wings, where he started creating wakesurf foil boards in 2017 and testing the wind-wing with a foil just over one year ago.

Wing foiling is among the newest activities on the water-sports scene, and is serving as a lower-consequence, more-accessible option for those who are drawn to kitesurfing or windsurfing. Best of all, it requires less wind than its kite- or sail-based counterparts—making it a perfect sport to take to Whistler’s lakes, Krause said.

“Basically it’s the replacement of what windsurfing was, because there’s no longer a mast or a boom. It’s an inflatable wing, which is similar to a kite, but smaller. It propels you across the water on a foil,” explained Legge. To Legge’s knowledge, Stinger is currently the only Canadian company fabricating these wind-wings.

It’s just the latest of many water sports that Krause—now a team rider for Legge’s Stinger brand—has added to his repertoire over the years, since his dad taught him to windsurf at five years old.

“The board is above the water, but the foil is what gives you lift, so there’s minimal drag and that’s why you don’t need these big huge sails and to give you lift … It looks effortless when he does it,” Legge added.

Originally from Germany, Krause and his family settled in Whistler in 2019 after making the move from Europe to Vancouver Island towards the end of 2018, the same year he began competing on the Youth World Tour.

Over the course of his young career, he’s racked up impressive results like third in the U13 division at the Gran Canaria Wind & Waves Festival in Pozo Izquierdo, Spain in 2017, and second at the same event in 2018. He earned enough points over the course of the tour to earn the title of World Champion—twice. At the end of the 2019 season, Krause ranked fourth overall in the Professional Windsurfers Association Youth and Junior Wave Boys U15 division. At 11, he said he became the youngest athlete to compete in the prestigious Aloha Classic.

“He’s the next Kai Lenny,” said Legge, referencing the Hawaiian famed big wave surfer, stand-up paddle racer, windsurfer, kitesurfer, wing foiler and all-around watersports legend.  “On a scale of one to 10, Pepe is a 12.”

It’s a fitting comparison: Among Krause’s short-term goals is to surf Jaws, Maui’s biggest and most powerful surf break, for the record.

That said, Krause admits he was disappointed upon moving to Whistler and finding it difficult to go windsurfing in his own backyard on a daily basis—typically, he and his family would make the 45-minute trek to Squamish and the windy Howe Sound waters several times a week. Wing foiling, however, has changed the game. Because of the afternoon thermal winds that blow through the valley regularly, Alta Lake sets a perfect scene for the sport. “You can get through the gusts easier, because … wing foiling is a slower speed [than windsurfing],” Legge explained.

Particularly when those gusts result in whitecaps across Alta Lake’s surface. “When it’s too windy to go paddleboarding, it’s time to go wing foiling,” he said.

Interested in trying it out for yourself? Legge recommends getting comfortable riding a foil first—best done behind a motorized watercraft of some kind—“then you need to learn to wing,” he said. “Whether you’re on skis or a paddleboard, you need to learn to work with the wind to propel you. Then you put the two together, so you’re basically doing two sports in one.”