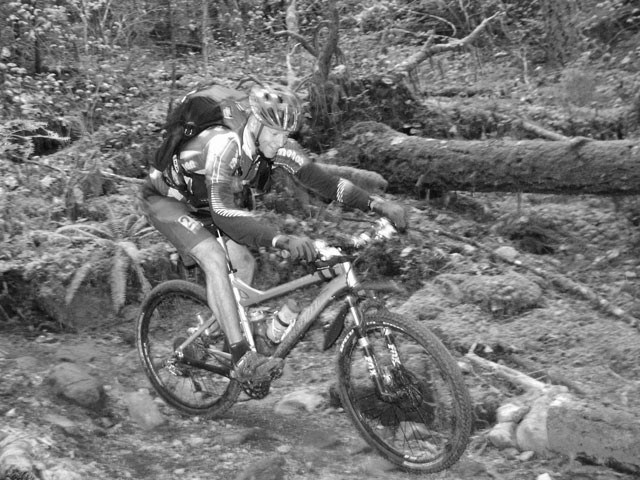 Happy Plunger Gary Robbins negotiates a technical section of the Powerhouse Plunge, just ahead of teammate Todd Nowack. They were first out of this section, but lost the lead in the next section.

Participants in the Squamish Mind Over Mountain Adventure Race on Saturday called the course one of the hardest ever in the MOMAR series, with challenging bushwhacking in the navigation sections, long and technical mountain bike trails, and some seriously uphill trekking.

The defending champions, Gary Robbins and Todd Nowack of Team Helly Hansen/MOMAR, were in first place coming out of the Powerhouse Plunge, about two and a half hours after the race start, but they were pursued closely by Justin Mark and Jeff Riemer of Team Helly Hansen Vancouver Island. Mark and Riemer caught up on technical Crumpit Woods sections of trail, and the teams were neck and neck heading into the trek and rappel section.

Mark and Riemer pulled out ahead and rode to the finish line in a time of four hours, four minutes and eight seconds. Robbins and Nowack were a close second in 4:05:50.

“We went into the last running section at the same time, and had a little faster rappel and pulled to about a minute in front at the last transition,” said Mark. “We had to hammer on our bikes to the finish, because we knew the other team was nipping on our heels the whole way.

“We know every time we come out that we’re going to race against each other, and we have a good rivalry going on. Last year it was them by a hair, and this year it was us. It really pushes you to have that kind of close competition, which is probably why we’re so much faster than all the other teams today.”

Mark wasn’t bragging — after the first two men’s teams it was 10 minutes before the first solo racer reached the finish line. The third place men’s team, Pain is Temporary (Garth Campbell and Shane Ruljancich) finished in 4:32:51.

For Riemer, it was a good, challenging course.

“This event was really different from a physical standpoint,” he said. “It wasn’t harder, and there weren’t any mystery events to tax the brain, but the relentlessness of the climbing, whether you were on your bike or on a trekking section, didn’t really quit. Even at the finish line, we came around the corner to (Quest University) and thought we were done, but no, we had to keep going, running up the hill to the finish line. That was the hardest part of the day for me.”

For Robbins, the Mind Over Matter Adventure Race (MOMAR) series still has two events remaining, and his team plans to defend their title this year by making up the lost time in the next two events.

“I know the other events have kayak sections, which is to our advantage,” he said. “I know (Mark and Riemer) were probably a little stronger on the technical mountain bike sections today, but I’m really happy with the day. The weather held out for us, we went on trails we’ve never been on before… Jen Segger-Gigg did a great job designing the course… and Todd was just great in the navigation section, we went form checkpoint to checkpoint and really feel we were putting some time in on the other teams. It was a fun day, and a close race, and that’s all you can ask for.”

Solo racer Bart Jarmula of Revelstoke prefers longer, multi-day races rather than sprints, but pushed himself from start to finish to cross the line in 4:14:28.

“MOMAR always puts together a great race course, it’s not just an off-road triathlon — you have to have good technical mountain bike skills, you have to know how to navigate and stay on your toes,” he said. As for pace, Jarmula had no idea where he was in relation to the other athletes.

“I had Justin’s team to pace off of on the first climb, but after that I was on my own and it becomes a bit of a mental game to keep pushing. The last bit was hard — I knew I wasn’t gaining and the gap was the same, but it wasn’t until the end of the loop section that I found out there was nobody behind me for 20 minutes. There were a few spots where you could cruise and eat something, but most of the downhills were technical and I have a hard time racing anaerobic — my specialty is longer races where you get into a good pace, and this type of short race always pushes me to my threshold. I know I’m probably going to be a little sore tomorrow.”

The second solo racer behind Jarmula was Whistler’s Duncan Munro, who was also fifth overall across the line in 4:57:53. The third solo was Normon Thibault of Nanaimo in 5:23:54. Whistler’s Scott Brammer, the only other Whistler athlete doing the race, was 17 th in the men’s solo category in 7:11:15.

The first solo female was Sarah Seads of Courtneay in 5:42:39, followed by Meghan Thompson of Garibaldi Highlands in 6:39:00 and Kristi Storey of Surrey in 7:16.13.

In the Team of Two Coed category, Johanna Gunn and Toran Savjord of Brackendale were first in 5:48:08, followed by Shawn O’Toole and Michelle Steel in 5:53:25, and Cheryl Beatty and Sean Lunny in 6:06:52.

The winners of the Team of Four Female category were the Yummy Mummy Allstars (Christina Halcrow, Lisa Hall, Anita Jansen-Verdonk, and Lisa Younie) in 7:23:52.

Close to 250 people took part in the race. Results and details on future races are available at www.mindovermountain.com.