Whistler athletes up to Ironman challenge 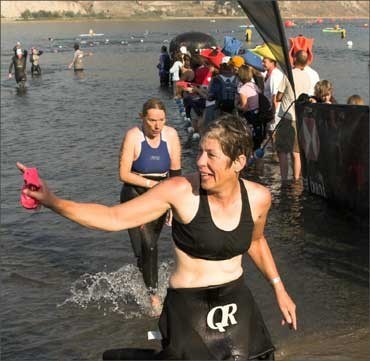 Eight Whistler residents took part in Ironman Canada this past weekend in Pencticton, battling heat, wind and often their own bodies to make it to the finish line.

The Ironman course includes a 3.8 km swim, a 180 km cycle and a full length, 42.2 km marathon. Despite the enormous distance and physical challenge, an amazing 2,178 of the 2,300 athletes who entered the water on Sunday morning made it to the finish line.

The top male this year was Victoria’s Jasper Blake, who placed first in the pro men’s race. He was 12 th out of the water, fifth on the bike, and first on the run with a marathon sprint of two hours, 48 minutes and 12 seconds to post a total time of 8:33:58. Australia’s Courtney Ogden was second in 8:47:46, while Ontario’s Gordo Byrn placed third in 8:51:23.

The top female was Australia’s Belinda Granger, who crossed the line 17 th overall in 9:25:13. Ontario’s Lisa Bentley was just three minutes back in 9:28:18, while Lori-Lynn Leach of Saskatchewan pulled up a distant third in 10:09:23.

Sticking to his game plan he took it fairly easy on the swim and bike legs, then ran the whole marathon in a time of 3:30:33.

Next up was Paul Suter, who was racing the distance for the eighth time in his career and competing in his second Ironman of the season.

"The whole thing came down to the fact that my wife, Christine, and I set out over 14 months to both qualify for the world championships at the Arizona Ironman, and she made it and I didn’t," said Suter. "So this was my makeup race, and now we’re both qualified to race in the world championships at Kona, Hawaii. I think there are maybe only a handful of other married couples in the world who can say they’ve done that."

There were only championship qualifer spots for the top seven racers in Suter’s category, but three athletes passed on the opportunity.

Suter knows it will be tough to race a third Ironman in the same season, but lately it’s all coming down to strategy.

"(Ironman Canada) really came down to race planning, and I think having the experience I did in Arizona helped this past weekend in Penticton – I went in with a plan and carried it through on race day," he said. "I did exactly what I wanted in preparation for the race… I swam at exactly the pace I wanted to swim, I biked the pace I wanted to bike, and I kept my nutrition up to be able to run the marathon. That was a huge success for me.

"Everyone (from Whistler) did really well. Mike (Edwards) had a great race, and everyone was really supportive – not only the racers but all the people who came out to support them supported you as well. The whole thing is just great."

The run was particularly hard with temperatures at 35 degrees that afternoon and a headwind for the first half of the run. The competition also made it tough, with three runners ahead of Suter finishing just 14 seconds apart. However, with the wind at his back Suter managed to go a lot faster on his way back, and was faster in the last seven km than at any point in the run.

With only a short turnaround until the world championships, Suter will also draw on the experience he gained the last time he went to the worlds. Last time he qualified he didn’t take a break from training, and by the time he returned from Hawaii he was completely run down and prone to illness. This year he plans to take time to rest, go for a few short training sessions. "Seven weeks isn’t enough time to improve my physical conditioning, but it’s enough to maintain what you have," he said.

It will be the opposite for Christine Suter, who broke her foot in the Squamish Triathlon in July. With her cast coming off she will be attempting to regain the same form she had in Arizona that qualified her for the championships.

His strategy was the same as Suter’s, to get through the swim and bike stages feeling good enough to run a marathon, and he completed the last leg in a time of 4:12:41.

"I basically followed the plan," said Blok. "I swam outside the main pack to stay away from people and came out of the water not stressed at all and feeling like I could easily keep swimming. The bike also went well – I took it easy for the first 70 kilometres and came in at 5:39. Two years ago it felt like I went a lot harder to finish in 5:37, so that definitely went well."

Blok also had a good first half on the run, but says he slowed down at around the 17-mile mark. "I was still feeling good, I was maybe a bit dehydrated, but if anything I needed to train the run a lot more."

Blok missed qualifying for Hawaii by one spot, once the quota spots were handed out, and is seriously thinking about competing again next year.

"There are a few things I want to try," he said. "Now I know I can make it through the bike without stomach problems, there’s a few things I think I could do differently."

"It was tough – at least the marathon was tough, the swim and bike felt fine," she said. "I was quite stiff on the run, I never really felt I got into a fluid stride. I just put one foot in front of the other, and only allowed myself to walk through the food stations. The result was the marathon was a little slower than what I had hoped for, but I guess I felt as good as I could have – I wasn’t sure what to expect.

"I knew the marathon would probably be my weakest part, but I’m still happy with the way it turned out. I was able to do it and enjoy it, which is something. It was really hot in the sun and I saw quite a few people along the course getting sick, there were lots of ambulances for people with dehyrdration and heat stroke.

"But it was such a great event, it’s just fantastic to go back to the finish line for the midnight cutoff and watch the last people coming in. It’s such a great experience."

Jacalyne Sherlock, who is following her own unique mind and body training regimen, finished in 13:56:46, 88 th in the women’s 35 to 39 age category.

Her run and bike were faster than two years ago when she first completed the race, but she found in the transition to the run that her legs weren’t co-operating. The heat was also starting to take its toll.

Rather than let it get her down Grace walked most of the course, talking to other athletes and spectators along the way. "I wanted it to be fun, otherwise what’s the sense in doing it," she said. "When I knew my legs couldn’t put in the effort I just told myself it’s going to be a long walk."

She hasn’t ruled out entering the race again in the future, but if she does she plans to practice biking and then running to make it easier to transition between the two events.

Squamish’s Mae Palm, the oldest female in the competition and the only competitor in the 65 to 69 race, finished the course in 15:05:07 with a steady pace to the finish.