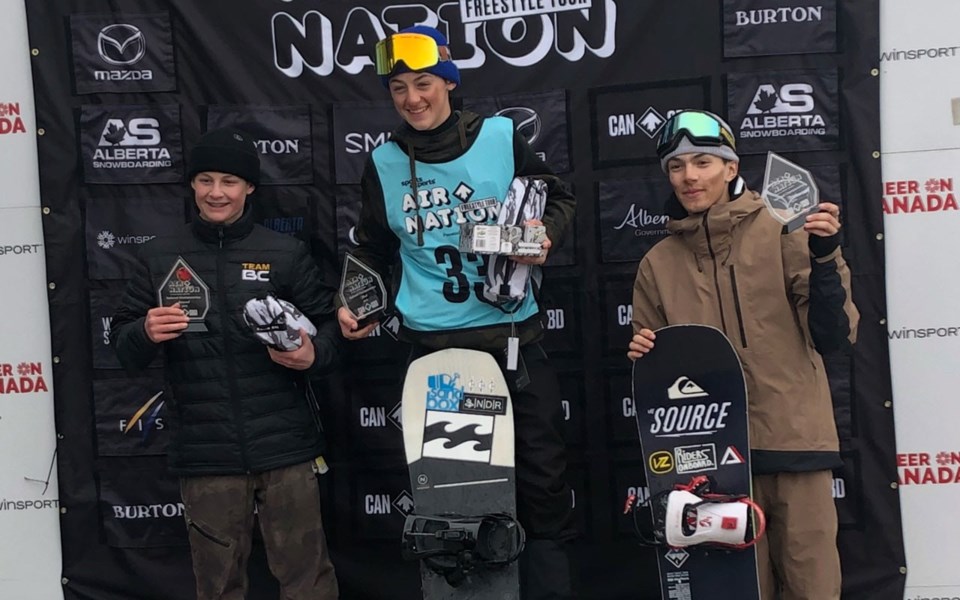 No matter the level, Whistler's snowboarders impressed in slopestyle competition all over at the Air Nation finals at Calgary Olympic Park last month.

Juliette Pelchat led the way, winning both the Western Canadian Championships and the Junior Nationals events while also earning sixth at Senior Nationals.

"Westerns was the one that stood out to me the most because it was just a really fun contest, everyone was encouraging everyone and we were all having a good time," she said.

Pelchat added that to make the finals as a 14-year-old going up against athletes five or more years older in the senior competition was an incredible feeling.

Watching the older riders perform up close, Pelchat said she didn't pick up technical points so much as she absorbed how they carried themselves en route to success.

"You can't doubt yourself, you have to be 100-per-cent sure," she said. "That's what I can apply to my riding—always be confident."

Meanwhile, 15-year-old Truth Smith came away with a second-place finish at Junior Nationals, which was an encouraging development after some frustrations to start the week at the Western Canadian Championships.

"It was pretty sick," he said. "We were there for a whole week and the first competition (Western Canadians) was the one I thought I'd do best in, but I did the worst out of the three there. I was in a bummer of a mood."

"(At Senior Nationals), it was unexpected and I was super stoked on that, and then at Junior Nationals, there was an insane amount of good snowboarders and I just landed the best run I could have," he said. "It meant so much."

Smith felt his run benefitted from his switch 900 and backside 900 tricks, which was similar to winner Liam Brearley.

In future years, Smith will have even more tools in his arsenal, as his rail work has improved and he has a pair of new 1080s, a switch and a backside, under his belt thanks to coach Sam Weston.