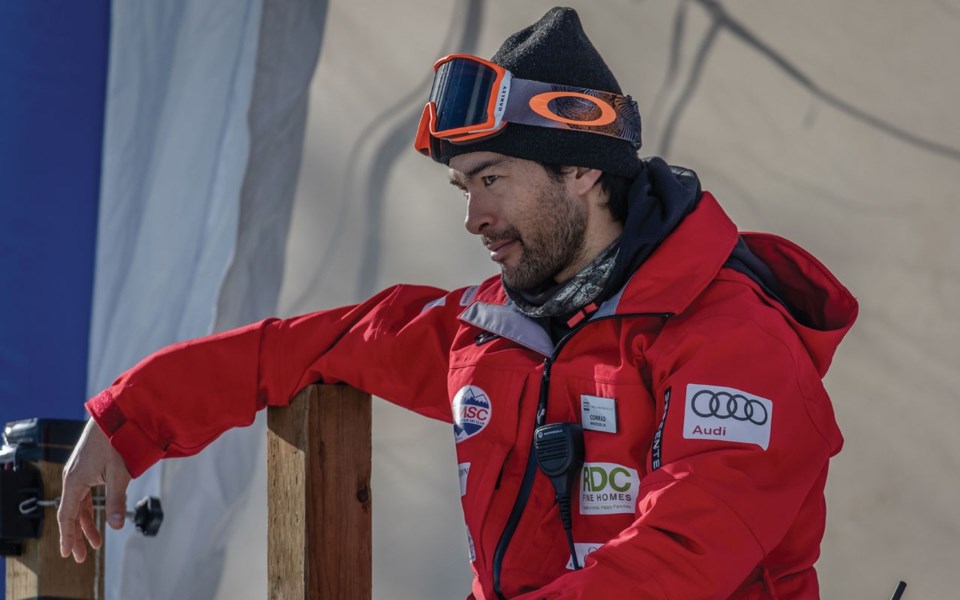 AT THE ROOTS Conrad Pridy earned the grassroots coach of the year award at the Audi 2020 Canadian Ski Racing Awards, announced on May 13. <ParaStyle:CUTLINE\:CUTLINE Credit>PHOTO BY HANS FORSSANDER, COURTESY OF CONRAD PRIDY

Pridy, who made 24 World Cup starts between 2011 and 2014, was honoured as Alpine Canada's grassroots coach of the year when it revealed its Audi 2020 Canadian Ski Racing Awards winners on May 13.

"The way I would sum it up is I haven't won anything in a while, so that was definitely a nice surprise," he said. "To come out on top is pretty flattering and definitely makes me feel proud to be part of the organization that supports me through and through."

In his third year in the role, Pridy said he was most proud of creating a greater sense of camaraderie among his group.

"The highlight for all of them was how much of a team feel there was for the whole season, how much they liked their teammates and wanting to spend time on the road versus wanting to get home," he said. "It's a bit of a culture shift that's gone on the past couple years that I'm most proud of is seeing some of the other athletes pass on some positive training habits and really good insights to their teammates, and then start to see those guys start to pass it off to next year's crop of new athletes."

In his own development as a coach, Pridy said he's become more cognizant of how to communicate with athletes to help each and every one of them achieve what they're capable of.

"We understand that everyone learns differently and takes different pieces of information from what you might say," he said. "To be sure the message gets across, either more avenues need to be explored for communicating or just making sure that you keep asking questions to athletes, coaches and parents to make sure that everyone's on the same page."

With a significant part of the season wiped out because of the COVID-19 pandemic, Pridy said it was a particularly tough pill to swallow for athletes experiencing a change this offseason, such as heading to postsecondary or graduating from the club.

"You ramp up the races and the end of the season is where all they really come together," he said. "They get pretty much half of the starts that they're going to get all season in the last month-and-a-half, which unfortunately is the part that got cancelled."

However, coaches have kept in touch with the returning athletes, and have created opportunities to train better for next season, which has kept everyone's spirits up.

Over the course of Pridy's time coaching in the club, the number of athletes in his group has risen steadily, though he acknowledged that it can fluctuate over the long term.

This past season, his group had roughly 35 athletes registered, though he expects it to settle in around 20 next year. Still, that number is higher than when he started.

"The athletes have been able to see a bit more of a clear pathway up through the different age categories, so it's a lot less of a shock to think about yourself racing for another year, or another two or three years," he said.

Though he's proud to see the club become more cohesive, Pridy hopes to climb the ranks of ski coaching, perhaps next year making the jump to a provincial or national program.

Another WMSC winner was Cameron Alexander, who took home the Minogue Award of Excellence.

"I was extremely honoured to have been selected. The Minogue Award is an award that goes to somebody who not only has done really well in their sport for that season, but a big part of it is they give it to someone who presents themselves in a positive way in all aspects of the sport," he said. "I just try to do my best to work my hardest and to have good sportsmanship as well with my teammates.

"I do what I can to help out anyone younger than me who needs help or has aspirations in the sport. I try to be open to them."

Upon discovering that he'd won the award, Alexander spoke with its namesake, ex-ski racer Danny Minogue.

"He's an extremely nice guy," Alexander said. "He was happy that I was the one who received the award and he hoped that the bursary will help me out with my ski racing career.

"He'd been following me throughout the season and he hopes that we stay in touch going forward."

Alexander posted four top-30 finishes in nine World Cup starts this year, including his first top-10, a 10th-place showing in the Kvitfjell downhill, in his final race before the remainder of the season was wiped out as a response to COVID-19.

"It's been weird for everybody, and I think we're all just itching to get back on skis and get back going like normal again," he said.

Other winners with WMSC connections were Marielle Thompson as the Ski Cross Female Athlete of the Year and Mollie Jepsen as the Para-Alpine Female of the Year.