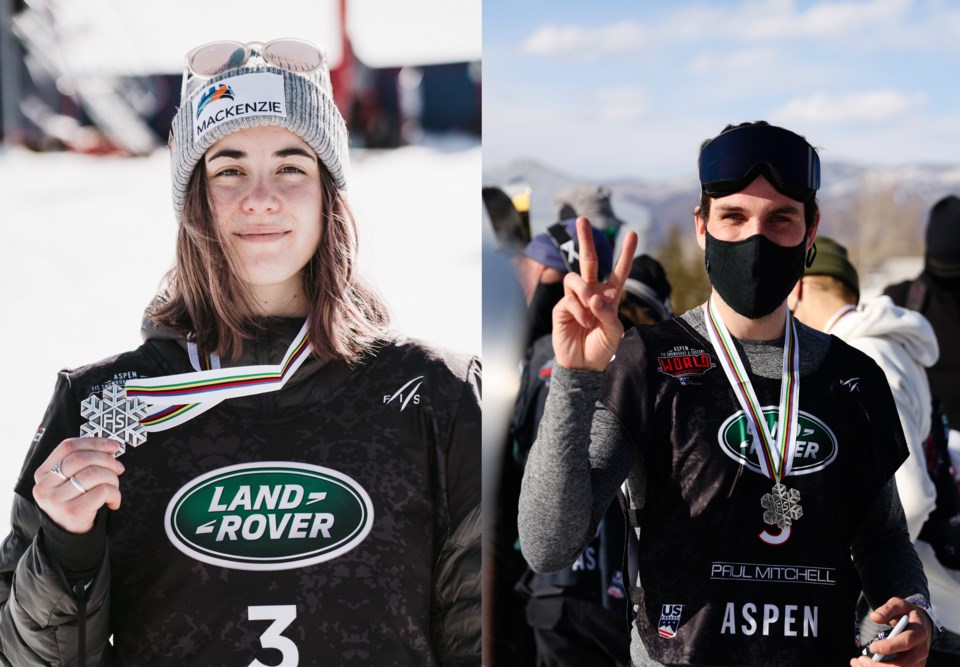 Rachael Karker of Guelph, Ont. and Whistler's Simon d'Artois are each returning home to Canada with a silver medal from the halfpipe ski World Championships in Aspen this week. Photo courtesy of Freestyle Canada

It was Simon d’Artois’ first competition since injuring his knee two years ago, but no one would have known it.

The 29-year-old Whistler skier marked his comeback by winning a silver medal in the halfpipe at the snowboard and freeski world championships in Aspen, Colo. on Friday, March 12. It is the 2019 Crystal Globe winner's first career World Championship podium.

After qualifying for the finals in sixth place, d’Artois rallied through difficult conditions to put down a technical second attempt packed with four different doubles—including a left double cork 1080 and an alley-oop double flat spin 720—which the judges rewarded with a score of 91.25.

The clean run felt “really good,” d’Artois said in a release. “I’m happy to be back and to see the work and time that I put into coming back stronger from my injury pay off. It definitely gives me confidence for the year to come and lots of relief.” Added Team Canada halfpipe team head coach Trennon Paynter, “He has been out for a long time and it’s been a tough road to go without competing. With his first competition back being a second place at World Champs, I couldn’t be more proud of him.”

D’Artois was bested only by New Zealand’s Nico Porteous, the reigning world champion, with a massive score of 94.50.

The Whistler local wasn’t the only Canadian skier taking home a silver medal, with Guelph, Ont.’s Rachael Karker winning second place in the women’s contest with her score of 94.25. Her teammate Amy Fraser of Halifax took ninth.

After qualifying for the finals in first and third places respectively, d’Artois’ teammates Brendan Mackay and Noah Bowman, both of Calgary, struggled to put down solid runs on Friday, after sunny skies in Aspen softened one side of the pipe. Mackay finished in seventh, followed by Bowman in ninth. Fellow Canadian halfpipe skier Evan Marineau ended the competition in 13th place.

Both Laurie Blouin and Mark McMorris are leaving Aspen with a little extra hardware.

The Canadian snowboarders were each crowned world champions after earning the podium’s top spot in their respective events at the big air contest in Colorado on Tuesday, March 16.

“It’s amazing feeling,” said Therriault in a release. “I was able to land the tricks I came here to do and had so much fun today. I came into the event with a game-plan and was aiming to at least get a top 10 with a good score, but I never thought I would get on the podium.”

Veteran Evan McEachran of Oakville, Ont. was the lone other male Canadian competing alongside Therriault in the finals. McEachran put down two solid jumps to land in fifth place.

Meanwhile on the women’s side, Megan Oldham of Parry Sound, Ont. followed up her bronze-medal-winning performance during Saturday’s slopestyle event with a fifth-place finish in Tuesday’s big air contest to wrap up the world championships.

Reece Howden has already secured his first-ever Crystal Globe title, but now he’s continuing to prove why he deserves it.

The 22-year-old from Cultus Lake, B.C. pulled out yet another world cup win in Sunny Valley, Russia on Saturday, March 13, marking his fourth victory of the season.

In the women’s race, Windermere’s Courtney Hoffos caught an edge in the big finals to land in fourth place, while Tiana Gairns of Prince George tied her personal best to finish fifth,