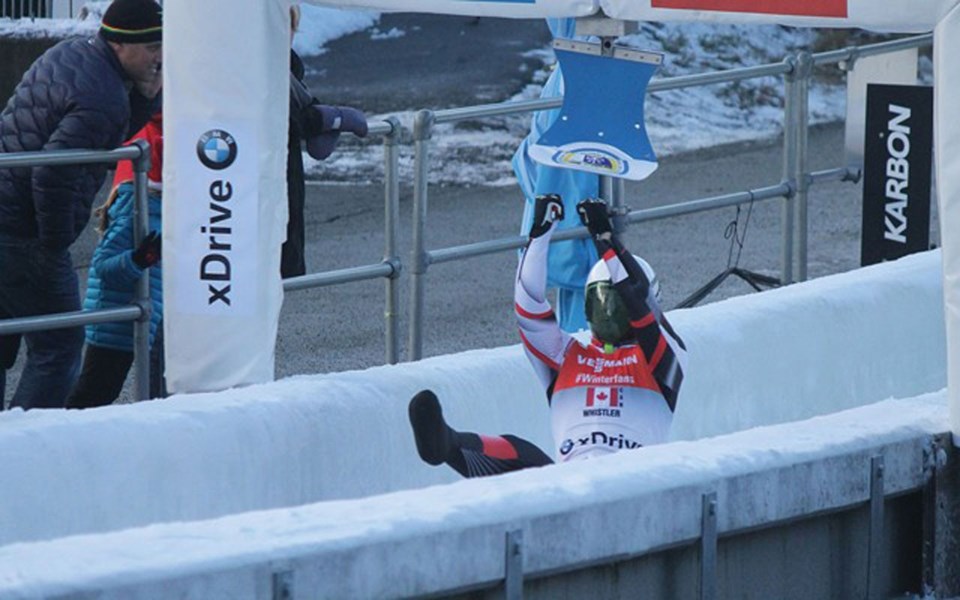 A little home cooking could be a cure for Reid Watts.

With finishes of 17th and 19th on the Viessmann FIL World Cup tour so far this season, the 20-year-old is hoping to get back on track when the World Cup swings into the Whistler Sliding Centre for race action this Friday and Saturday (Dec. 13 and 14).

"I'm a little disappointed in my results so far. I've been happy with how I've been sliding down the track but there have been some problems at the start this season," he said. "It's the pull and the paddle. They've not been as effective as I would like them to be."

After the second World Cup of the season in Lake Placid earlier this month, Watts headed with the team to Calgary to work out the kinks. While it wasn't possible to completely fix the beginnings, Watts said the extra attention was making some positive difference.

"For me, it's almost getting back to basics and getting it together for the home race," he said. "I'm in a better place now."

While Watts is pleased with how he's controlling his sled once he's on the track, the caveat is that the slower starts have made that skill moot.

"If you don't quite have the momentum off the start, you're only playing a game of catch-up the whole way down, a bit of damage control so to speak," he said.

Watts added that with his current revisions, he's not looking for a results-based goal, and will instead continue to focus on his process.

The Sea to Sky's other entry, Pemberton's Trinity Ellis, has had a more positive start to the season, opening the season with an eighth-place finish at Igls, Austria, in just her third World Cup contest. Sitting in 16th after her first run, Ellis shot up to the top-10 after posting the fifth-best time in her second run.

Heading into her first-ever World Cup race at home, Ellis is looking to show her hometown what she can do, eying another top-10 placement and being among the 15 to qualify for the Sprint World Cup contest.

"I'm hoping it'll be a good race. I'm feeling pretty confident going in. We had a lot of sliding here in the preseason at the beginning of the year and I'm feeling confident, so hopefully I can show my best," she said.

This weekend's World Cup will hold a bit of extra importance, as it'll be Whistler's final FIL event before hosting the 2021 World Championships. Even so, Ellis said she isn't feeling any additional weight on her shoulders coming in.

"I don't think it'll add too much more pressure this weekend. It'll be just me, sliding my best and see where it goes," she said.

Watts, meanwhile, said that the looming World Championships aren't creating any added stress, but there's the double-edged sword of being at home that seems to pop up at every race here.

"It's the track you know the best, but that also comes with the added pressure that I put on myself of wanting to do well," he said. "It's going to be a big benchmark, for sure, to see how I race and what my result is.

"It's going to be really telling as to what I need to improve on for next season with the big show, World Championships."

Meanwhile, Whistler Sport Legacies president and CEO Roger Soane is anticipating an action-packed weekend up on Blackcomb Mountain, especially with the 50th edition of World Championships coming to town in 2021.

He's excited for locals to see the legacy babies of the 2010 Winter Olympic Games compete on the big stage.

"It is great and it's why the races are here. To see those kids come through the program over the years, in Whistler and in Calgary, it makes everything that we do seem worthwhile," he said.

While skiers and boarders bemoan the lack of snow on the mountain, Soane said that the dry conditions were good for business.

"The lack of precipitation is good for us as a track. The cool temperatures mean that the track will be fast," he said. "Friday will be a low of minus-3 and Saturday, a low of minus-7, which is perfect for sliding."

It'll remain to be seen if the dry conditions remain, as the forecast as of Dec. 11, however, called for rain and/or snow for most days leading into the races.

As well, fireworks will follow the action on Dec. 13.

Tickets for the race are $10 per day, though children 12 and under are free. As well, parking is available in Day Lots 7 and 8, though the Excalibur Gondola runs free of charge for those looking for access from Whistler Village.