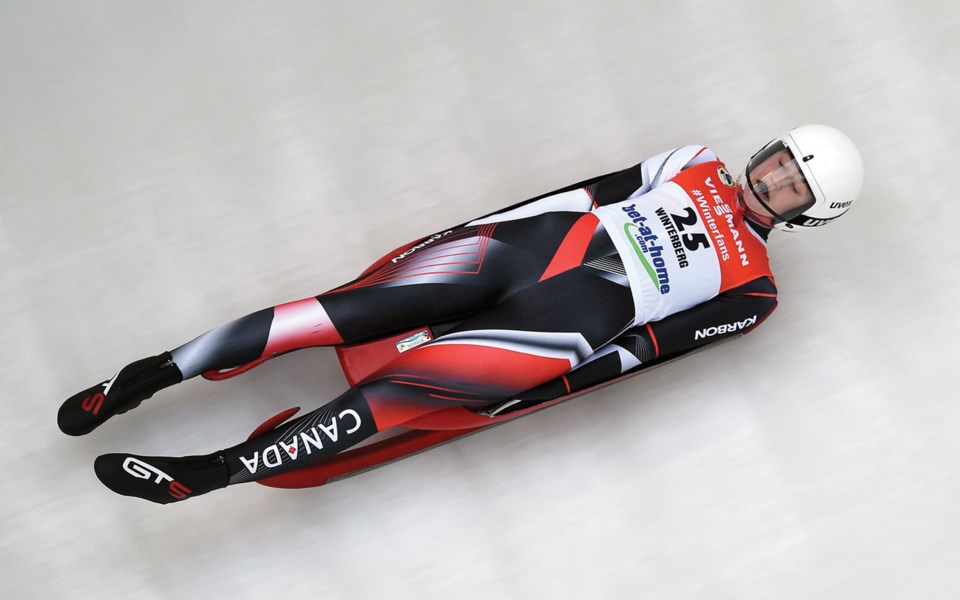 It started with confirmation that Whistler Olympic Park (WOP) would host Nordiq Canada’s World Championships Trials from Jan. 7 to 10.

But that afternoon, the Whistler Sliding Centre received word that the International Luge Federation (FIL) World Championships, set for Feb. 5 to 7, will take place elsewhere.

WSL president and CEO Roger Soane said there was some indication that the FIL was considering a change, as earlier this summer, it wanted an assurance by Sept. 1 that athletes would not be required to quarantine upon arrival to Canada.

“At that point in time, I said to [Canadian Luge Association executive director] Tim Farstad, ‘There is no way that the government is going to give you any relief for the event in February on Sept. 1.’ It may happen in January, but it certainly won’t happen in September,” he said. “I thought it was a very long shot anyway once they were asking for that kind of clarification.”

Whistler luger Trinity Ellis understands the decision, but was looking forward to taking part in a marquee event on her home track.

“It’s definitely disappointing. That was a big race I was looking forward to, for sure,” she said. “At the same time, with all this COVID stuff, the whole season has been up in the air.

“It’s not really much of a surprise, but it’s definitely disappointing to hear.”

To stay ready for the season, however it ends up playing out, Ellis and the other national team members have used one another as measuring sticks and motivators with the uncertainty facing them all this year.

FIL is expected to release its 2020-21 season schedule later this month, and losing two weeks due to quarantining before world championships would have thrown a wrench into the timetable.

Farstad said the association had monthly meetings with FIL for the last four months and saw the writing on the wall fairly early.

“Teams and organizations can’t afford to come and sit in Whistler for 14 days, pay to be there, and then race another two weeks,” he said.

Soane said while the sliding centre put significant efforts into preparing for the event, it hadn’t yet put down any major money.

“It was all planning right now and no outlay of financial commitments,” he said. “We would have gone into the financial commitment side as we started to put ice on the track in October. It really would be minor things … with the major expenditure being toward the middle and end of January.”

Whistler had already rallied to prepare for the event relatively quickly, as FIL voted to move the championships from Calgary last summer after the Alberta track’s closure.

“We worked hard to get this event in the beginning,” Farstad said. “Our athletes were super excited and it’s tough to take.”

With the change now official, Soane said the sliding centre will likely operate on a tighter schedule, open five or six days a week instead of seven, and with fewer staff members. Should the international borders remain closed, the track will still welcome the sliding national teams early in the campaign before shifting into domestic competitions.

The track will look to host the event in the next Olympic quadrennial, either in 2024 or 2025, with the latter being more appealing to Soane as, in the case of 2021, it’s set to be the last major event before the Games.

“It’s always key because it’s a qualifying event as well,” Soane said. “It’s a shame that it’s so far away, but a lot of sports work in these four-year cycles.”

Farstad, meanwhile, understands if there needs to be due process to land the championships again, but with the international excitement around bringing the event to Canada shown even when FIL was determining the change, feels confident about hosting again soon.

“I would hope that we’re at the head of the line,” Farstad said. “I would expect other countries would support [us] because they see what happened and it was taken away.”

On the brighter side, Canada’s top Nordic athletes will come to Whistler Olympic Park in January for World Championships Trials.

The trials would determine which Canadian athletes move on to the FIS Nordic Ski World Championships in Obertsdorf, Germany in February.

Soane was thrilled to see the park land a major Nordic event, noting that WOP has often been passed over in favour of more traditional hosts in Prince George, Canmore or eastern Canada.

The event’s organizing crew, Soane said, is the same group leading the charge to bring the 2023 FIS World Junior/U23 Nordic Ski Championships to Whistler, making this trials a test run if the bid is successful.

“These trials would be their first test event, so to speak,” Nordiq Canada events coordinator Jeff Ellis said. “We would build in another event in ’22 in the final prep for ’23, assuming we get the championships.”

Ellis added that, anticipating restrictions still being in place in January, that spectators will likely be barred.

“If we are there under gathering restrictions, they’re the group we don’t need,” he said. “It’s sort of a bonus if we have them.”

In terms of racing itself, the event can currently hold a mass start of up to 50 athletes at a time, though there is the possibility of pivoting to an interval start if necessary.

“That’s not a huge restriction for us. We don’t necessarily have fields that are larger than that, but we are exploring the possibility of restricting who can come to trials,” he said. “We don’t want athletes to unnecessarily put their health at risk by getting on planes if they don’t need to.

“We’re not such a deep nation that we have 20 or 30 athletes that are fighting for spots on our championship teams.”

With the number of new cases spiking, however, nothing is considered set in stone at this point.

“At three months out, we’re going to start having the conversation, checking in and going, ‘Can we host the event like we’d like to? Yes or no?’” he said, noting there would be regular check-ins until about eight weeks before, when a final decision will be made.

Ellis added in a follow-up text that if the World Championships themselves were not feasible for Canadians to attend, the trials portion of the event would be cancelled, but racing would proceed in some form if possible.