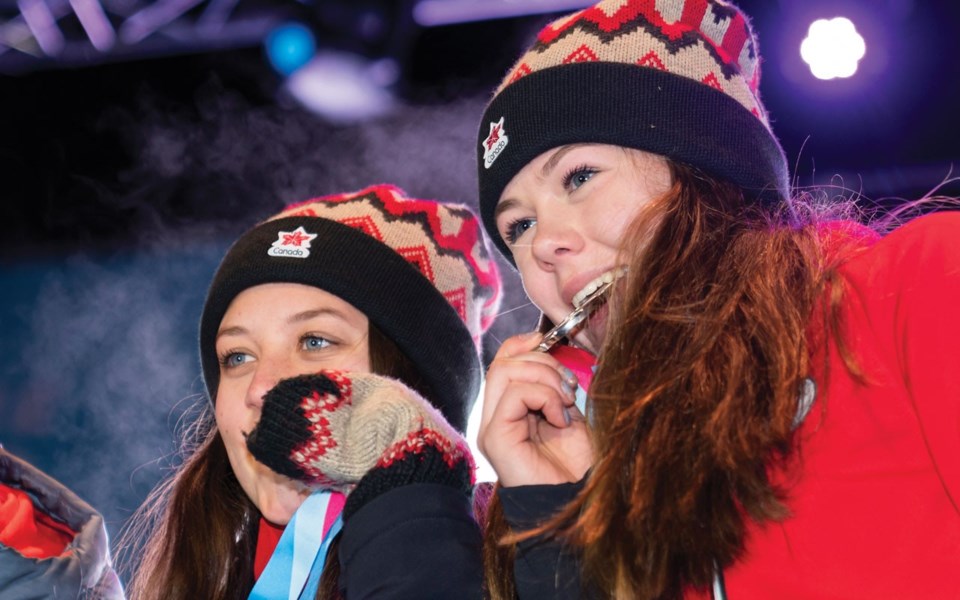 Caitlin Nash didn't want to settle for being off the podium once again.

After finishing fourth in the women's singles, the Whistler luger—paired with Natalie Corless—once again sat in fourth after the first run of the women's doubles race at the Youth Olympic Games in Switzerland. The lugers, both 16, steeled themselves, put down the second-best run of all second attempts, and found themselves with a silver medal when all was said and done in the Jan. 18 race at St. Moritz.

"After finishing fourth in singles again, I desperately didn't want another fourth place in doubles," Nash said. "I definitely had motivation for us to get a medal in the doubles event. We're really happy with where we finished in doubles and we're super happy that we could pull off a medal."

In the end, Nash and Corless finished 1.266 seconds back of the German pair of Jessica Degenhardt and Vanessa Schneider while holding off Latvia's Viktorja Ziedina and Selina Elizabete Zvilna for silver. Nash credited the mindset that she and Corless had going into the second run for their success.

"Just being off the podium like that, you just have to shift your focus away from the results and make sure you go down in the best way you can," she said. "We knew that if we could lay down a good run, we could have a faster time, and we did have a better time in the second run."

The pair left their comeback until a little later, sitting fourth throughout much of the second run before finding speed in between the third interval and the finish line to make the leap into the medals.

"It was honestly really crazy," Corless said, adding that the second run was one of the best runs of the week. "We knew we put down our best runs and we were just really waiting to see if it would be enough to move into a medal position, and it was. It was an awesome feeling to be down there and realizing that we'd be getting a medal."

The duo nearly came home with a second medal in the team relay event on Jan. 20, but once again narrowly missed the podium in fourth. The contest begins with a women's singles racer, follows with a men's singles racer, and finishes with a doubles sled. Nine of the 13 teams had a male doubles team, but Nash and Corless' mixed squad—featuring Canadian Kailey Allan and Italian Alex Gufler—was the top finisher with a women's doubles anchor.

"Everyone on our team had really good runs. Caitlin and I really felt like we pulled our weight even against all the men's doubles teams," Corless said. "Although we were just short of the podium, we really did our best."

Added Nash: "We were all really happy with our results and I think it was special being the top women's sled to finish."

It wasn't the first time Nash and Corless had competed in the relay, having lined up during last year's FIL Junior World Championships. Still, it's a different feeling from normal competition.

"You really have to be on the ball to pull that really fast reaction start. Then there's the added pressure of a whole team weighing on you," Corless said.

Both competitors enjoyed the track at St. Moritz and have previously had success there. Corless won a youth 'A' World Cup race there last season, while Nash, of course, came into the doubles race with her fourth in singles.

"It's honestly one of the smoothest tracks. It's one of a kind because it's a natural track with no artificial refrigeration," Corless said.

Away from the track, Corless and Nash participated in an opening ceremony in St. Moritz away from the main host city of Lausanne, which is at the opposite end of the country, though they took part in a live stream of the main event.

In addition to hosting all of the sliding sports, St. Moritz also welcomed speed skating, so Nash and Corless took in some competition away from the track.

Given that the luge tour operates separately, both appreciated getting to know their skeleton and monobob cousins a little better.

"We've met kids from across the world who are around our age and competing in sports like ours, which has been something that not very many people get to experience in their lifetime," Nash said. "I think we're really fortunate that we can be here."

The duo will stay in Germany for the next month, training at Oberhof and Konigssee before returning to Oberhof for the Junior World Championships in February, where they will once again compete in the open doubles event. The pair became the first women's doubles team to race alongside the men in World Cup action here in Whistler in December.

Other Whistler-connected athletes were in action at the Youth Olympics.

Freestyle Whistler grad Steven Kahnert took an eighth-place finish in the halfpipe on Jan. 21, bouncing back from a 26th-place result in slopestyle on Jan. 20.

Ski-cross racer Jack Morrow took 13th in the men's event on Jan. 19 before helping a team of Canadian and Argentinian athletes to 11th in a team ski- and snowboard-cross event on Jan. 21.

Lastly, freestyle skier Skye Clarke qualified, but did not start the slopestyle and big air events due to illness.