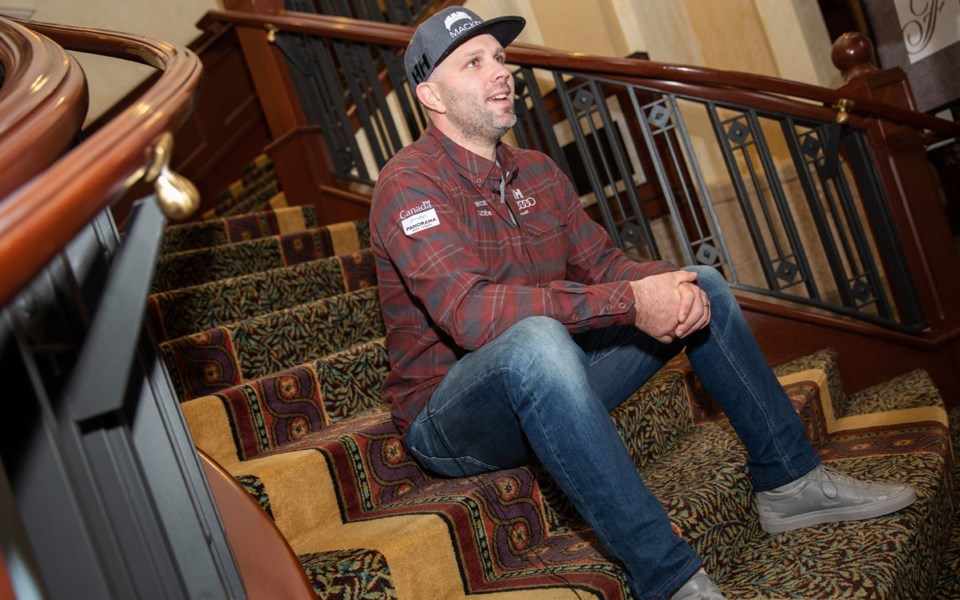 Drawing on an old joke about outracing a bear—only needing to be faster than one other—Manny Osborne-Paradis described what the past year has been like.

"For a year, I've been the slowest person in the room," he said with a laugh.

The veteran Canadian ski racer and Whistler Mountain Ski Club (WMSC) alum is looking to change that quickly, though. Speaking just over a year after a devastating crash in training at Lake Louise left him with a broken fibula, the 35-year-old is looking to return to action for the 2020 season.

After months of challenges, Osborne-Paradis is on an upward trajectory in his recovery.

"I feel good because, I think, I've been feeling so terrible," he said. "Every day, I can go up and down stairs so much easier, or in my workout routine this week, we added lots of skipping movements. Skipping can then lead to jogging, and then getting back to real life."

Osborne-Paradis explained that he has the benefit of advances in medical technology to guide him in his recovery. A SPECT scan (a type of nuclear imaging test that creates 3D pictures using a radioactive substance and a special camera) showed that his bone was still healing, so while Osborne-Paradis' return to snow is delayed, he feels it's for the best and reduces his chances of re-injuring himself in the future.

"The X-ray looked great. My bone looked strong and healthy, and my doctor wanted me to go get this spec scan because it can tell more of the blood flow in the bone," he said. "This is pretty new technology, and many racers have returned to snow and re-broken their legs.

"They were only dealing with X-rays, but being able to utilize this spec scan really showed the blood flow in the bone and it was bright red. It showed that the bone still was healing, even though there weren't fractures in the bone that you could see on an X-ray.

"I'm giving myself the true chance to be 100 per cent when I get back on snow."

And while Osborne-Paradis would prefer to be back on the slopes for his own enjoyment, he knows that being his best requires plenty of hard work in the gym.

Currently, Osborne-Paradis' goal is to return for the season-opening Lake Louise race in 2020. While it'll be a strenuous journey to get back to the World Cup level, Osborne-Paradis stressed that it was one he wanted to embark on all along.

"In my head, I always wanted to get back on snow. The same feeling I have now, or even feelings I have when I'm healthy, you wake up in cold sweats at night being like, 'What am I going to put my body through this winter?'" he said. "The mental preparation to go down Kitzbuhel or do the Camel Bumps [at Groeden/Val Gardena, Italy] or just trying to be one of the best skiers, it's really hard. You do have fears about that all the time.

"But once you've put in the training and you're given the opportunity to rise to the occasion, you always do that. I have doubts about Kitzbuhel, and night terrors and cold sweats, all the time, all throughout the year. The times when I don't have it is when I'm in the start gates and I'm ready to go."

While Osborne-Paradis has suffered significant absences before, most notably after breaking his leg and tearing a knee ligament in Chamonix in January 2011, the two-season recovery period is longer than what he's experienced.

Throughout the spring and summer, Osborne-Paradis was glad to get outside and ride his road bike, but 10-kilometre rides would cause his knee to swell and, with low haemoglobin counts from the blood loss associated with the injury, he felt ill afterwards.

"It's a grind when you go for a 10-km road bike ride and then you have to sleep the rest of the day," he said. "Now I feel good, I feel healthy and my bone feels good."

Currently, he can kneel and hop on his leg, and now it's just getting past the muscle atrophy stage.

"It's getting [the muscle] to fire without tons of effort," he said. "This is the fun part. At least now, every day, it feels like a big step forward."

Another setback came when Osborne-Paradis was bedridden for two months after breaking nine of the 13 screws in his leg, which are holding everything together with bone cement and plates, after pushing hard in the gym.

There were also plenty of emotional weight on him, with wife Lana taking care of him and three-year-old daughter Sloane. He credited his family for helping him through his recovery.

"I had so many months of labouring times when I was on hydromorphine and I couldn't remember an hour earlier, what I had done or what I was doing," he said. "To have my family around and my wife taking care of me, making sure I was drinking my bone broth and that I was getting my dark, leafy greens, I was taking my pills at the right time. I'm not sure how you recover without that support."

Osborne-Paradis added that the withdrawal symptoms from the drugs was trying as well, as he was on a high dosage of painkillers for an extended period of time.

"It's a real thing, drug addiction. This was just a numbing agent so I could get through," he said. "Three days, four days, I would keep the lights off and just eat food in bed and not be able to move. There's some dark days. It's not just about the surgery and that part.

"The dark days really happen when you're back from the hospital."

Osborne-Paradis plans to be back in Whistler helping the WMSC with a speed camp at the end of January. Later in the year, he hopes to be back in the start gate in Lake Louise, facing down the same slopes where this whole ordeal began.

"It's always hard to visualize something you're not ready for, and that's true for most things in life, but definitely in pushing the limits of your body and mind in these sports," he said. "It's nerve wracking at this time to sit on the sidelines and say, 'How am I going to come back from this injury and how am I going to push my body to the limit?'

"Once the time's been put in and the months of preparation have been done, I'm sure it'll be the same as any other race."