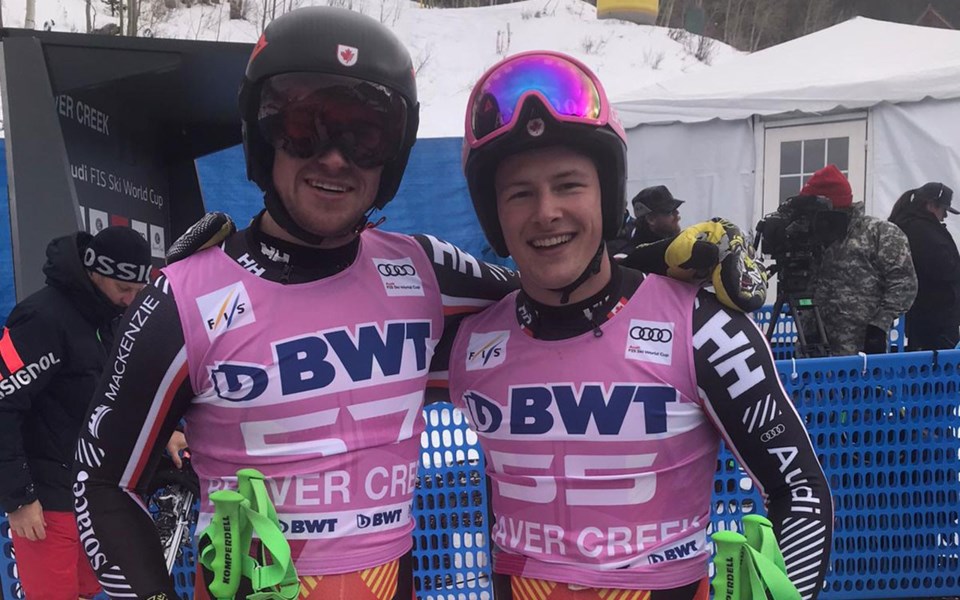 Another weekend, another new benchmark for Brodie Seger.

Less than a week after equalling his Audi FIS World Cup personal best of 16th in the super-G at Lake Louise, the Whistler Mountain Ski Club (WMSC) alumnus topped it in Beaver Creek, Colo., taking 13th in the downhill on Dec. 7.

Ultimately, Seger was 0.91 seconds off the pace set by winner Beat Feuz of Switzerland and 0.5 seconds off the podium. France's Johan Clarey and Austria's Vincent Kriechmayr tied for second.

"It's pretty exciting. I think the look on my face when I crossed the finish line says it all. I was just really happy to keep the momentum rolling," he said.

What's been impressive about Seger's recent run of success is that as a younger competitor, he's done it from the back of the pack. Seger wore bib 55 after wearing No. 57 at Lake Louise.

"It's definitely a challenge and with the amount of time it takes to run a full World Cup field, sometimes it feels like you're running it a different day than the top guys. I watched the top guys run from my couch in my hotel room before I'd even put my boots on to go up for my run," he said. "Stuff can change with the weather or the snow. Sometimes the flats slow down when they've been baking in the sun for awhile.

"This season, so far, it has been a little bit lucky with the conditions we had. Both races, in Lake Louise and Beaver Creek, the conditions held up really well."

What also helped Seger was his love of Beaver Creek, which he enjoys riding from top to bottom with its variety of challenges, ranging from fast sections, technical sections, rollers, a steep pitch and larger jumps near the track's end.

With his enthusiasm and familiarity, the 23-year-old was content to let his skis guide him and for the most part, it worked.

"Just like Lake Louise, my goal for my run was to let my skis run as much as possible. Be aggressive, but let everything flow with the course and the hill," he said. "I would not say that my run went perfectly as planned. There were definitely a few little bobbles, but I was just trying to stick to that plan the whole way down to let things run, and I think that paid off."

Seger's other result of the weekend wasn't quite as high, as he took a 37th-place finish in the Dec. 6 super-G. Things started off positively, but a couple of skids later, he found himself trying to make up time.

All told, though, Seger sees plenty of positives from which to draw as he progresses in the campaign.

"I'm just trying to stay focused on the skiing side, because I know if I stick to my plan, and I trust in the way that I'm skiing, and I'm skiing with confidence and letting things run, then I know the time will be there," he said. "This past weekend was a good example of that, going from the super-G on Friday to the downhill on Saturday. In the super-G, I had a really good run going. I was sixth on the first interval, then had a couple mistakes then just lost too much time towards the bottom.

"I ended up outside of the top-30 and you can see how easily that happens. A couple things don't go your way and all of a sudden, you're out the back."

While he's enjoyed success at the World Cup level this year, Seger is heading into this week's NorAm Cup action back at Lake Louise with gold on his mind, at least a bit. Even though he won the NorAm super-G title in 2017, in parts of seven seasons on the tour, he's never gone and won a race, leaving the feeling of some "unfinished business." Still, Seger is trying to remain focused on the task at hand.

"I'm here to hopefully pick up some points and improve my start number for the World Cup," he said.

Meanwhile, another WMSC alum was the top Canadian in the super-G, as James Crawford took 21st, finishing 1.86 seconds back of winner Marco Odermatt of Switzerland and setting a new personal best in the process. Norway's Aleksander Aamodt Kilde took second and Austria's Matthias Mayer was third. Other Canucks were: Dustin Cook (31st); Read (41st); and Thomsen (58th).

Crawford said both he and Seger have taken major strides in recent races, and he appreciates doing it together.

"I finally started to ski the way I know I can. I was really starting to push in a good way, not just going down the course and trying to win every single section, every single part of the course," he said. "It seemed like I started maturing a little bit this week, which was quite nice and like a step in the right direction.

"I realized what it actually takes to be a World Cup racer. You can be the fastest skier on the planet, but if you can't get to the bottom, you'll never see success in this sport."

With his goal of getting into the top-30 section of the start list before the end of the season in mind, Crawford noted that it's been important to figure out what it means to compete at the World Cup level, which could be a little less for skiers of his ability than one might anticipate.

"You get this feeling that you have to do more than you have to to win," he said. "To be fair, you do have to do a little bit more, but it's no different from training or racing at the NorAms. If you bring that same skillset that you have, it should be enough to win races.

"World Cup isn't that much different than NorAms. It's just got a much deeper field."

Crawford had some unfortunate news on the weekend, as he crashed out hard in the downhill. While he's feeling OK physically, it hadn't been determined if he'd sustained a concussion during a Dec. 9 interview. Crawford participated in training on Dec. 10, but did not complete his first run.

"My body is OK, but I hit my head. I'm still going through the motions to see if I have a concussion or something along the lines of that," he said. "At the moment, I feel good and physical activity and mental activity don't seem to cause any problems. I'm taking it slow and trying to get back into racing in Lake Louise again."

In the Dec. 8 giant slalom, meanwhile, Trevor Philp posted the best Canadian result of all three days with a seventh-place finish, 2.09 seconds back of winner Tommy Ford of the United States, with Norwegians Henrik Kristoffersen and Leif Kristian Nestvold-Haugen rounding out the podium.

The Canadian women, meanwhile, hosted a trio of speed races in Lake Louise over the weekend.

Marie-Michele Gagnon was the country's best throughout, starting the weekend with a 28th-place showing in the Dec. 6 downhill, 2.43 seconds back of champion Ester Ledecka of Czechia. Switzerland's Corinne Suter nicked Austria's Stephanie Venier for second. Other Canadians were Roni Remme in 40th and Candace Crawford in 47th.

Gagnon was then 26th in the Dec. 7 downhill, 2.54 seconds behind winner Nicole Schmidhofer of Austria. American Mikaela Shiffrin and Italy's Francesca Marsaglia were second and third, respectively, while Remme was the only other Canadian to finish, taking 40th.

In her best result of the three, Gagnon took 19th in the Dec. 8 super-G, 1.70 seconds off the pace set by winner Viktoria Rebensburg of Germany. Italy's Nicol Delago and Switzerland's Suter rounded out the podium. Crawford, meanwhile, was 35th.