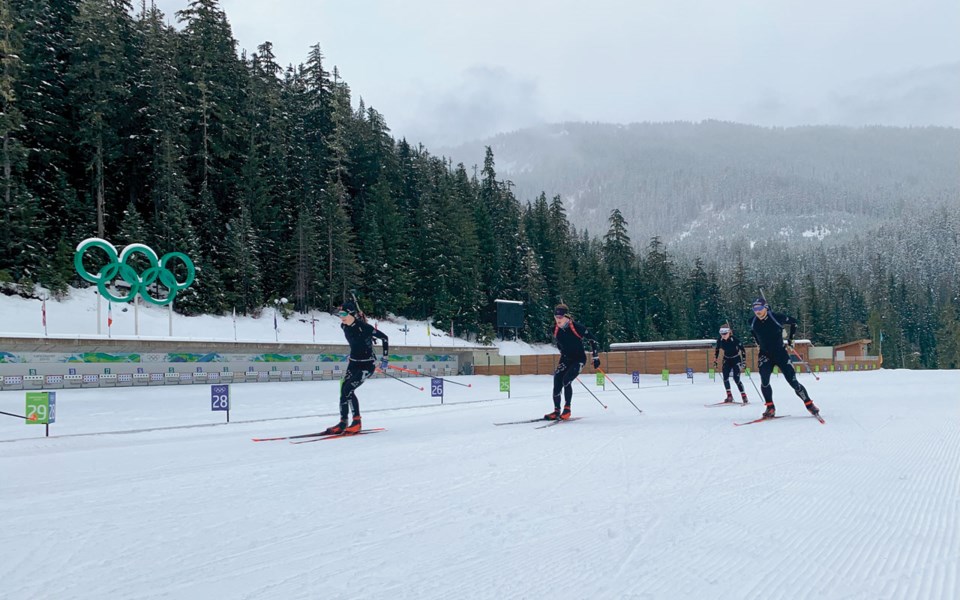 The Whistler Nordic Development Centre is embarking on the 2020-21 season with hopes, dreams and contingencies.

That said, nearly everything else about the upcoming campaign is on shaky ground, but in his role, Letondeur is preparing his athletes for anything.

“The team is looking pretty promising this year. Of course, with the COVID situation, everything is a little up in the air. We don’t know what races we are going to have access to but we are training hard, training full time,” he said.

Letondeur is keeping his fingers crossed that the team will be able to compete at the season-opening race in Canmore, Alta. in early December en route to qualifying for international races in Europe. However, with case counts rising in B.C. and elsewhere, nothing is guaranteed.

If racing opportunities end up being severely limited, the season could look much different.

“We might just shift the focus and do more of a training year this winter and aim for long-term goals,” he said. “They train with us because they want to achieve long-term goals and eventually be part of the national team at some point and go to the Olympics.

“It can be potentially good to spend the winter focusing on training instead of racing. That could pay off in the long term.”

Being an outdoor sport, Letondeur said training is not too different, though with recent health orders, coaches have to ensure more distance between athletes, such as biathletes shooting in every other lane.

This year’s team comprises of 10 full-time athletes, with the bulk of them returning from the 2019-20 squad. With a strange season ahead, Letondeur said the familiarity between all involved should help.

“We can make sure we focus on reaching the next steps with them,” he said. “Next year, we’ll try to recruit a younger group of athletes and potentially have two training groups.”

As for the venue itself, park managing director Tim Hope said that the stored Callaghan Gold snow was looking good, and the snowfall on Nov. 13, a day before opening, only helped.

“We prepared Callaghan Gold for this past weekend, and we did receive a good amount of natural [snow], which helped the condition even more,” he said.

While conditions earlier this week presented some challenges, the cooler temperatures forecasted ahead should help get the track back to where he’d like it before the public opening day of Nov. 27.

Hope stressed that the park instituted pandemic protocols when opening for summer operations, and those have been reinforced for winter.

“Like every other business, we’ve had to adapt our workplace safety features and our safe work practices,” he said. “There’s been more training for our seasonal staff that are coming onboard and we have more protocols for the rental process and first aid.”

While events such as ladies’ ski nights will not happen this season, Hope said the average visitor can expect similar service to what they’ve seen previously.

“If you are a recreational skier and you want to come out, it shouldn’t be that much different,” he said. “It’s a socially distanced place by design, to a point. We have various trailheads and starting points. There’s not a real reason to bring people together, other than the day lodge, and we’ll have processes and plans in place to help facilitate a safe experience.”

While there will be capacity caps in place for indoor facilities, with the park spread over 1,100 hectares, Hope said he anticipates safely welcoming similar numbers of guests to past years.

“I believe there’s going to be a lot of interest. We know that,” he said. “We’ve made provisions to provide additional parking, should we need it.”

Hope said the park has “put a pause” on tobogganing to start the season in order to focus on skiing and snowshoeing, but noted it still may return at some point in the winter.

In town, the Resort Municipality of Whistler is awaiting consistent winter conditions in order to open the Lost Lake Trails. Passes purchased by Nov. 22 will be mailed to the buyer, while those purchased on Nov. 23 or later will be available for pick-up at Meadow Park Sports Centre seven days later. Full details and a contactless waiver are available here.