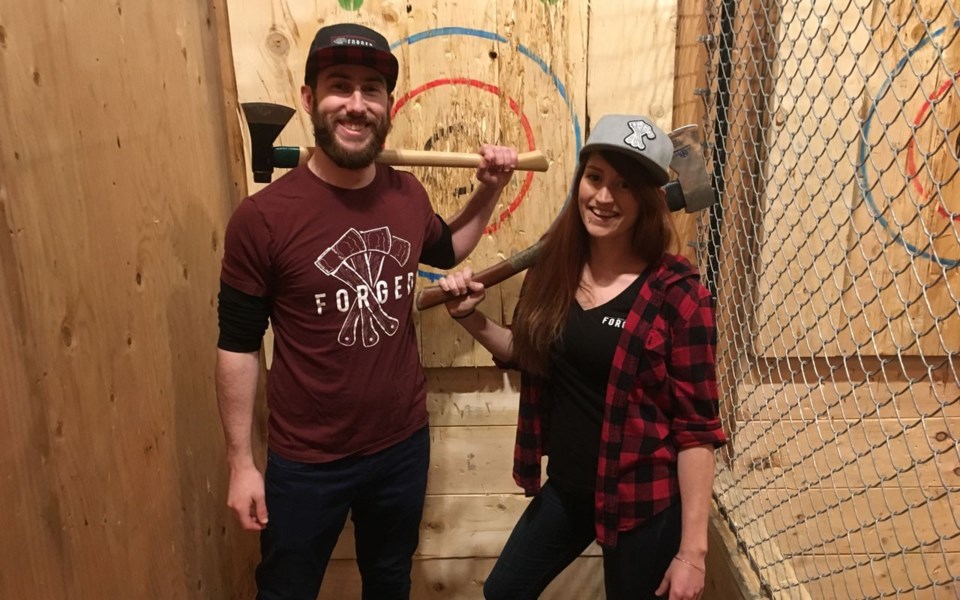 SHARP SHOOTERS Brent Kotzen and Krista Mackie will represent Whistler at the national event in Toronto this weekend. Photo by Dan Falloon

Forged Axe Throwing's two representatives at the 2019 National Axe Throwing Championships in Toronto on Feb. 17 are quick studies in the sport.

Brent Kotzen and Krista Mackie both started roughly a year ago—and they've now worked their way up to the top 192 competitors on the continent.

Kotzen said his experience is technically 20 months from his first huck, as he came to Forged for a work event, but then ramped up his interest after he took a job at the centre last February.

He considers himself throwing competitively only since early October when he and Mackie went to the regional event in Lethbridge, Alta.

"I pick up things quickly," he said.

Kotzen, who was born in Cape Town, South Africa before living in Sydney, Australia for 20 years, explained that he changed his technique dramatically, eschewing power for a more accurate approach.

"The way I was throwing wasn't working for me. I started trying to work on a different throw that I saw, so my accuracy and my consistency has just skyrocketed," he said. "I initially started with the standard way that we show how to throw, which is basically straight arm, you basically bring it back and start hucking it towards the target.

"I worked on what I call 'dainty' but everyone else calls it 'the Canadian flick.' I hold it differently. I start a bit closer and instead of it being more in my arm or my shoulder, it's all in the wrist."

Around the time he switched his technique, Kotzen also changed his weapon of choice, going to the Cold Steel Axe Gang, which has a four-inch straight blade and a straight handle as opposed to the standard curved blade and curved handle.

Mackie, meanwhile, got into axe throwing as a job before it was a pursuit. After having recently moved back to Whistler from Australia, she had responded to a job posting at Forged with the encouragement of her boyfriend after she had displayed impressive accuracy during a visit to Whistler Shooting Adventures.

"As a joke, he tagged me in a post saying that when the zombies come, I'm already in charge of security, so I may as well go round out my skillset," she said.

After finishing third in Forged's house league before going to regionals, she expected the top two finishers to qualify in Alberta before she went on a roll.

"I hit a stride and had an out-of-body moment. I thought 'Is this really happening?'" she recalled.

Mackie was home in Ontario when she officially found out she'd qualified for this Sunday's double-knockout event and invited her friends and five-foot-tall mother to come cheer her on in a group dominated by tall, burly guys.

"It's an honour to make it this far," she said. "If I can not get knocked out in two (straight), that would be the goal."

Mackie took encouragement from the regional event, where roughly a third of the competitors were women, discovering that Forged's roughly 50-50 proportion wasn't an anomaly. She and Kotzen took tips from regionals winner and defending national champion Straun Riley.

"We saw where the bar was," she said. "To watch the top player throw and get tips from him, to see where he stands and how he throws, that was such a cool learning experience."

Mackie noted that Riley's wife was third at the regional event and with no divisions, just a free-for-all, took some hope that she could match up well.

"I was a bit naïve, too, but then you're like 'We're in this just as much as they are. We have just as much of a chance. It doesn't matter which gender is behind the arm throwing it,'" she said. "I love that it's not divided."

After the tournament concludes, Kotzen will participate in a skills competition in the evening, challenging around the world (hitting targets in a specific order in the fewest throws) and ambidextrous (throwing two axes simultaneously) events. The other two events are doubles, with two competitors throwing simultaneously, and a time trial, where challengers try to garner as many points as possible in 50 seconds.