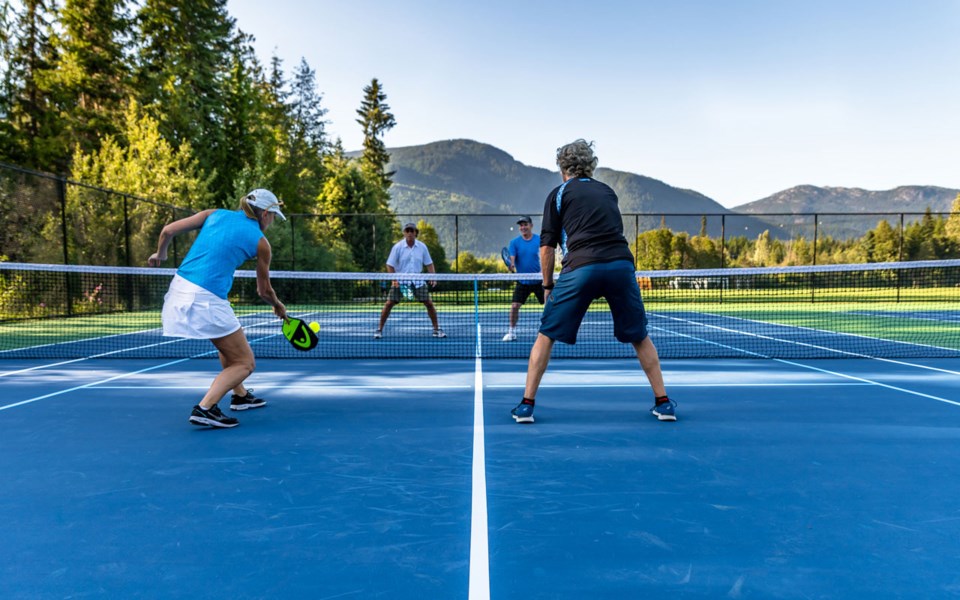 IN A PICKLE Whistler Pickleball Week will run from Aug. 8 to 16. Photo by Justin M. Belanger/Affect Photography

When he was the manager of the Whistler Racket Club, Kirk Paterson acknowledges that he didn’t give pickleball too much heed when he was first approached about offering the sport.

But in 2018, there was enough of a push from members of the local Mature Action Committee that he opted to give it a whirl.

“Enough people asked about it that we decided to paint a little court on an abandoned tennis court,” said Paterson, who currently sits on multiple Pickleball Canada boards. “It slowly grew from there and then eventually became exponential.”

As part of the week, ambassadors will be available to help members of the public learn the game, which is similar to tennis, though with a few key differences. The court is smaller, the ball has less bounce and players serve underhand, for starters. For more information, check out whistlerpickleball.com.

WPA co-president Garth White, who serves alongside Norm Binion, said the association formed over the winter and had launched its programming in late February before being halted by COVID-19. Now, the group has resumed recreational play in recent weeks after Pickleball BC created return-to-play protocols, including offering the clinics.

“We’ve been following the bouncing ball, and now we’ve caught up to it,” White said, adding that the WPA has tried to sort out specific times it can offer the clinics at local courts, but as of press time, had not received confirmation. As it stands, interested players can head to the website and request a time.

“They can reach us through our website and we can deploy ambassadors out to greet them with sanitized equipment and a 40-minute commitment to introduce them to the sport,” he said.

White added that all ambassadors are well versed in both the sport and proper protocols to employ to keep participants safe.

“We’ve been able to train our ambassadors about, first of all, COVID safety and a quick intro to get people holding a racket properly, getting them to figure out how to volley or return a ball, a little bit about stance, a little bit about the rules, and get them actually playing a game within 15 to 20 minutes of showing up,” he said.

Though a major reason for pickleball’s ascent has been as a means for seniors to stay active, Paterson highlights it as an activity for the entire family.

Though organized clubs tend to host people who are 60-plus, Paterson said a recent survey conducted by the national organization showed significant participation from younger athletes.

“It’s an approachable game for everyone,” he said. “Grandparents in a club will try to get their whole family to play.

“Tennis is a lifetime sport and a family sport, and pickleball is the same, except the difference is it’s quicker and easier to get started with it.”

White added that there’s a low cost to entry, as a basic racket and ball set can run as low as $20.

As the RMOW has repaired its tennis courts in recent years, it has added pickleball lines on nine in order to maximize their usage. Locations with pickleball courts are: Bayly Park, Alpha Lake Park, Brio, Meadow Park, White Gold and Myrtle Philip.

“Inside the tennis lines, they painted pickleball lines,” White said. “They’re a shade of blue that differentiates them from the background but doesn’t obscure or interfere with the tennis lines.”

Paterson hopes the future will bring pickleball-exclusive spaces down the line, as it would be simple to fit 16 players in the same space that four players currently use for tennis.

“The natural evolution will be some dedicated courts in the community somewhere,” Paterson said.