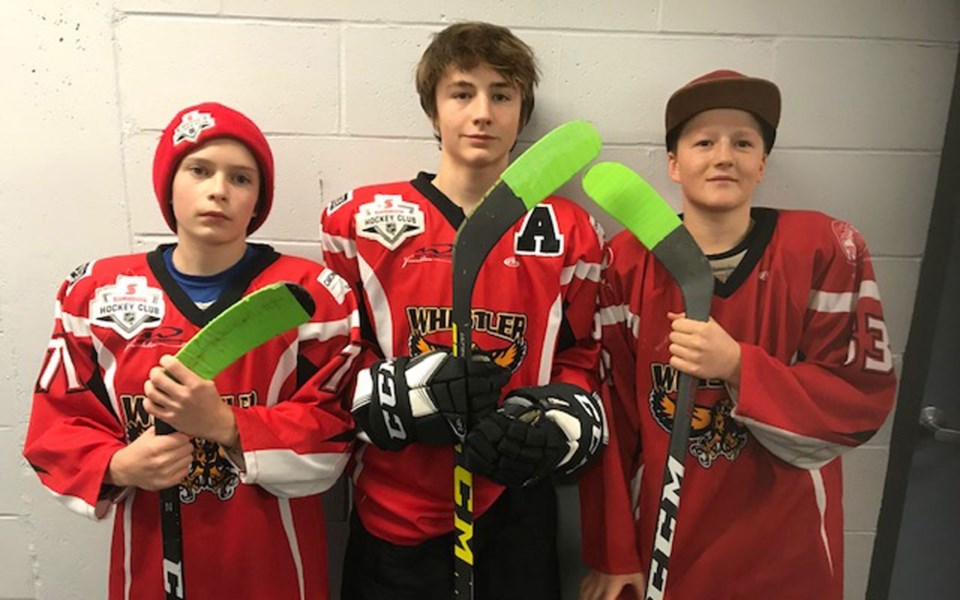 Young hockey players across the province, including those in the Sea to Sky, got a lesson in mental health over the weekend.

This year, the Buddy Check for Jesse initiative was expanded to all teams with players aged 11 to 14 under BC Hockey's purview. Each of those more than 1,000 teams received a mental health kit including material for coaches, wristbands, and green stick tape, with the colour symbolizing mental health awareness.

This is the second year that the program, started by Victoria's Dr. Stu Gershman, has been offered. It started with 150 teams, primarily on south Vancouver Island, and with 40 BC Hockey bantam- and midget-aged zone teams, last year.

Buddy Check was started in honour of Gershman's son Jesse, who died by suicide in October 2014. Jesse had been diagnosed with obsessive-compulsive disorder and was learning more about the condition at the time of his death.

The program's message encourages youth to treat mental health issues no differently than a physical ailment and to support people who need it.

"Youth is the target group, and the message that's going to that group is what's most important, because it's that age group that are sponges for change. They can actually make a difference when they receive the appropriate message," Gershman said, noting that 70 per cent of mental illnesses start before age 19. "When my son passed away, it was the hockey community that his little brothers were involved in, and myself coaching, that provided us with significant support."

Gershman added that with hockey being Canada's game, the potential reach and positive effect on youth is significant.

Gershman was thrilled to see the program expand across the province this year, while other pockets of support are popping up nationally.

Western Hockey League clubs including the Prince Albert Raiders and Winnipeg Ice are taking part, as are the Jr. 'A' Winnipeg Blues of the Manitoba Junior Hockey League.

Gershman said funding was only available for the program within B.C. this year, but eventually hopes to connect with every provincial and territorial governing body nationwide. He added that teams outside can access the materials on their own, though.

"The resources can be downloaded from the website and the message is not hard to give," Gershman said.

Gershman noted that no one is exempt from facing a potential mental health challenge because of other traits, noting Jesse was gifted and worked with Google in his early 20s.

"He had a huge heart," Gershman recalled. "He'd play some team sports, but he'd always say to me, 'Dad, they have all these rules. Can't we just have fun?' which I always admired."

Hockey has had a "suck-it-up" reputation, but after a rash of suicides of former NHLers in the past decade, the tide seems to be turning. Current Chicago Blackhawks goalie Robin Lehner opened up about his mental health battles last season in an attempt to break the stigma.

According to the Canadian Mental Health Association, only one in five Canadian children requiring mental health services receives them.

"The reality is the stigma is significant," Gershman said. "The stigma and discrimination are significant barriers to diagnosis and treatment.

"Hopefully by targeting youth, these statistics can eventually change one day."

"Everyone sat, eyes wide open, sat quietly and listened to it," said Sopp, adding that the peewee team also took part. "If we can spread the message to 50 kids in one weekend, then that's a good thing.

"It is becoming a problem, so getting information out there to a wide group of people so more people know about it is a good thing."

Sopp added that the Buddy Check initiative supports existing work done by the Kelty Patrick Dennehy Foundation, which was started after Whistler's Kelty Dennehy died by suicide at age 17 in 2001 after battling depression.

"For the people that were around at that time, like myself, it is a reminder," he said. "This issue does happen, and it happens close to home, and there are people in the community already advocating for this."