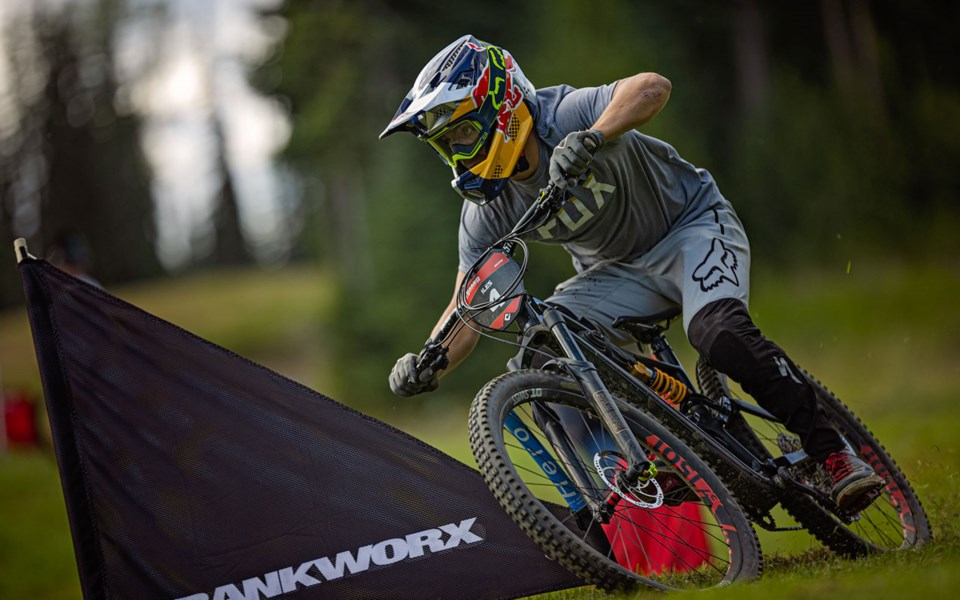 The Crankworx Summer Series was a bit topsy-turvy for the Whistler riders who took part in the three-stop, made-in-B.C. circuit.

Over the course of the series, which featured downhill, Air DH, dual slalom and enduro contests at SilverStar, Kicking Horse and Sun Peaks, downhiller Finn Iles came away with the overall win on the strength of winning all three enduro races as part of his five total victories and 10 podium appearances in 12 races.

“I felt confident that I could compete for the overall,” Iles said in a release after clinching the crown with two events to spare. “I wasn’t sure I could win or what I could do, but I’m happy to have come out and have done what I’ve done to clinch the overall. Proud of myself.”

Even being used to a cramped enduro schedule, Melamed said the 12-event-in-18-day gauntlet was an adjustment.

“It’s so different. Of course, we knew what we were getting into, but until you do something like that, you realize you have no idea how massive it is,” he said on Aug. 18. “It turns into a survival of the fittest by the end of it.

“It was really cool and I’m glad that most people got through it OK and it was an amazing effort by the organization team to make it happen. It was a huge success.”

For Melamed, the races were his first in 11 months, so even though he was riding regularly during the downtime, it took some effort to rev up and get going again.

“Racing is just such a different thing to anything you can replicate, so it definitely was a pretty big shock,” he said. “Right now, I just feel like it was this big, huge whirlwind.

“It really flew by, because it went from nothing to three weeks of absolutely everything.”

With Iles sweeping the enduro trio, Melamed’s triumph came in the Kicking Horse DH on Aug. 7.

“Not everyone had their best run and I had a really good run,” he said. “It was honestly good for myself because I hadn’t had any stellar results up until that point.

“Downhill, why people love it is you’re searching for that perfect run when you need it, and when you get it, there’s no better feeling than that.”

Heading into an abbreviated Enduro World Series (EWS) season beginning at Zermatt, Switzerland on Aug. 30, Melamed feels that skills he gained experiencing different disciplines at such a high level will provide immediate dividends.

“This was really aggressive, precise movements on the bike, so that was really cool,” he said. “With downhill, it was seeing where the 110-per-cent effort is for a four-minute run and knowing that you can do that and back it off for enduro, because for enduro, you have to ride a little bit under that level.”

Besides considering what he can take away from the experience, Melamed added that he enjoyed the atmosphere of sharing disciplines with others.

“You’re doing different disciplines that not everyone is good at or not everyone’s focus is on, so you can’t expect to be as good as the best people,” he said. “But it levelled the playing field for everyone because they came in with their sport but still had to do the others.

“It took out some of the animosity and competitiveness.”

With the upcoming EWS season, like other riders, Melamed has some mixed emotions about heading overseas in the current climate.

“There’s a bit of hesitation to go flying to Europe during a full pandemic, thinking, ‘Why is what we do bigger than that?’” he said. “But there’s lots of brands and industry that rely on it, so it’s what we have to do.

“I’m excited. I think it’s going to be an adventure. I’m confident we can take all the precautions we need to do it safely.”

In a sense, Melamed said, the Summer Series provided riders not only a warm-up on the racing side, but helped prepare them to race in the new normal, including wearing a mask and possessing hand sanitizer at all times.

“We really were respectful of all the places that we went to. We were always wearing masks and being hygienic. We really did a good job to limit our impact on those towns we just visited, so I’m confident we can do that when we go to Europe and I’ll feel a little bit less guilty about it,” he said. “We were really told how to act, how to be and take the precautions that we have to take.”

Other local riders in the Summer Series were: Pemberton’s Lucas Cruz, who took 11th in men’s and won the Kicking Horse Dual Slalom, Whistler’s Trevor Burke, who was 15th among men, and Whistler’s Georgia Astle and Leonie Picton, who were fifth and seventh, respectively, on the women’s side.