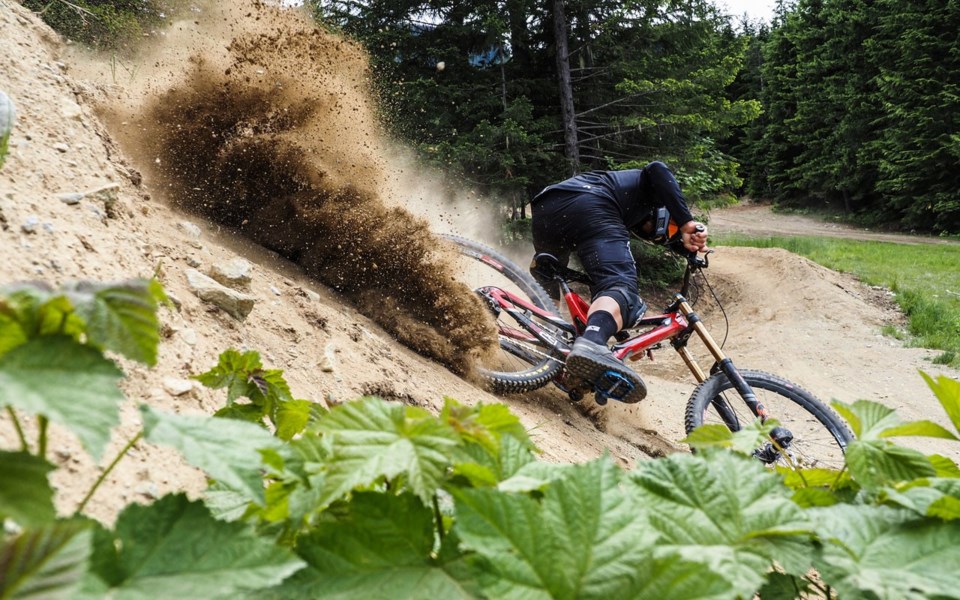 Local pro legend Chris Kovarik, who boasts the largest margin of victory in a UCI World Cup race, and Jaan Hurditch, have started STFU (Silent Technology For Ur Bike, technically, though they acknowledged the cruder connotation with the term also applies). The company produces chain dampers for bikes, eliminating the noisy scourge of chain slapping.

"You're focused a little bit more on your line choice and [the section of the trail] you're riding," he said.

Kovarik said it took years of trial and error to find a solution to the problem of loudness, starting with wrapping old bike tubes around the chains, moving to sticky-back Velcro and eventually moving to zip ties to keep the chain away from the frame.

"I originally knew that I wanted a bike that was a lot quieter without hearing the chain slap all over the place," Kovarik said.

From there, Kovarik explained, there were three or four small adjustments before coming up with the rubber version that is used now. He added that the STFU product in particular was in development for about a year after he teamed up with mechanical engineer and business partner Hurditch.

After joining forces, the duo attempted several different prototypes, with some, such as zip ties, working well initially before breaking in a few days, Hurditch explained.

From there, Kovarik said, they tried a fork bumper, which worked well but wasn't height-adjustable for different frames, as it only suited a handful of those they tried. Inspiration soon struck, however.

"We brainstormed and that's when the STFU chain damper came about," Kovarik said.

Added Hurditch, who has worked in bike shops for years, in a follow-up email: "Chris and I got together and tried to customize it. We wanted it to work with as many bikes as possible so developed a bunch of different designs, printed them using a 3D printer and tested them, both on our own bikes and also friends' bikes here in Whistler. It took several months until we had a product we were happy with."

While the device was primarily created to quiet commotion, a side effect is that the chain will last longer.

"With downhill bikes in particular, the main way that the chain actually wears out is it'll wear out through sideways deflection," Hurditch said. "As the chain flexes too much side to side, it stops shifting well, but you need a little bit of flex for the shifting to actually work."

The duo are still working to get their product, currently available for seven- and 10-speed mountain bikes, into a variety of shops, though it is for sale at Evolution and online at stfubike.com. As well, units for trail bikes are in production, with the hope that they'll be ready toward the end of autumn.

STFU is also supplying Finland's Pole Bicycles directly, as Pole is set to integrate the damper into one of its frame designs starting next year.

"Some people don't realize how much of a difference it would make until they put it on their bike and actually try it," Hurditch said. "We've had that same experience, I've felt, as well, literally just taking it off and riding around for a couple of laps in the park or on a trail ride."