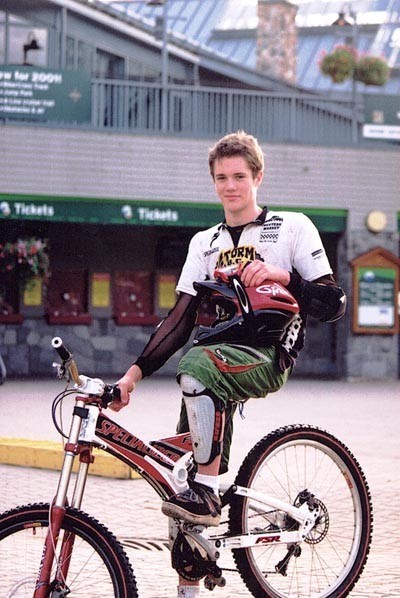 Jeff Beatty - Soon to be a legend..

The Canadian Cycling Association has released the final list of 49 cross country, downhill and dual slalom competitors heading to Vail, Colorado to take part in the Mountain Bike World Championships from Sept. 8 to 16.

On the cross country side, the Whistler contingent is led by Chad Miles, who is third on the Canada Cup circuit this year, second in the B.C. Cup standings (although he missed several events), and the 2000 national champion.

Will Routley and Tyler West will be competing in the Junior Expert Division. Routley won the bronze medal in the Canada Games last month, won almost every B.C. Cup race he entered, a finished fourth overall on the Canada Cup circuit. West, who has only been riding for three years, won the bronze in the nationals, edging past Routley by just 10 seconds. He also has a number of Canada and B.C. Cup wins to his credit.

Whistler’s Sylvie Allen, the top ranked Canadian woman on the World Cup downhill circuit, will lead the pro women’s downhill team. She finished 28 th overall, despite the fact that she only entered three out of eight World Cup competitions in 2001. She rides for Rocky Mountain Bicycles, and Fanatyk Co. in Whistler.

"I’m basically living in the mountain bike park until I fly out," says Allen of her pre-race preparations. "I’m on my bike a lot, but I’m more trying to have fun and relax rather than riding so much that I can’t hold onto my bike anymore. I’ve done that before in previous competitions, and I learned my lesson."

When she gets to Vail, Allen says her plan of attack is to study the course as much as possible before the race.

The other downhiller is Junior Expert racer Jeff Beatty, the national champion in his age group for the second year in a row and a fixture on junior podiums at the national and provincial level. He races for the Single Track Off Road Mountain Bike Club of B.C. (STORMBC), Specialized and Oakley, his first sponsor two years ago.

"It’s a big thing just to make it into the worlds," he says. "Yeah, I’m going there to race, but I’m also going for the experience."

To prepare for his race, Beatty is focusing his training time on getting out of the gates faster, and sprinting on wide open sections of track. "I’m also doing a lot of mental training, trying not to get psyched out. It’s different from anything I’ve ever done.

"There will literally be thousands of fans on the side of the course yelling and screaming, camera crews, support vans, and teams from around the world. The Canadian team is not very big, so we’re not going to have a huge presence."

When he gets to Vail, he also plans to walk the course a few times to get a good look at it and figure out the fastest way down. "It’s a quality rather than a quantity thing, I’ve discovered."

The Whistler athletes are putting on a fund-raiser at the Longhorn this Friday (Sept. 7) to help them cover their costs – Sport Canada and the athletes’ sponsors are only picking up part of the tab.

Admission is $5, including a raffle ticket, and dozens of sponsors are donating hundreds of prizes to the draw.

Doors open at 9:00 p.m., and all proceeds will go towards the Whistler athletes.

The World Championships run from Sept. 8 to 16. Team Canada is:

Will Routley – Whistler, BC