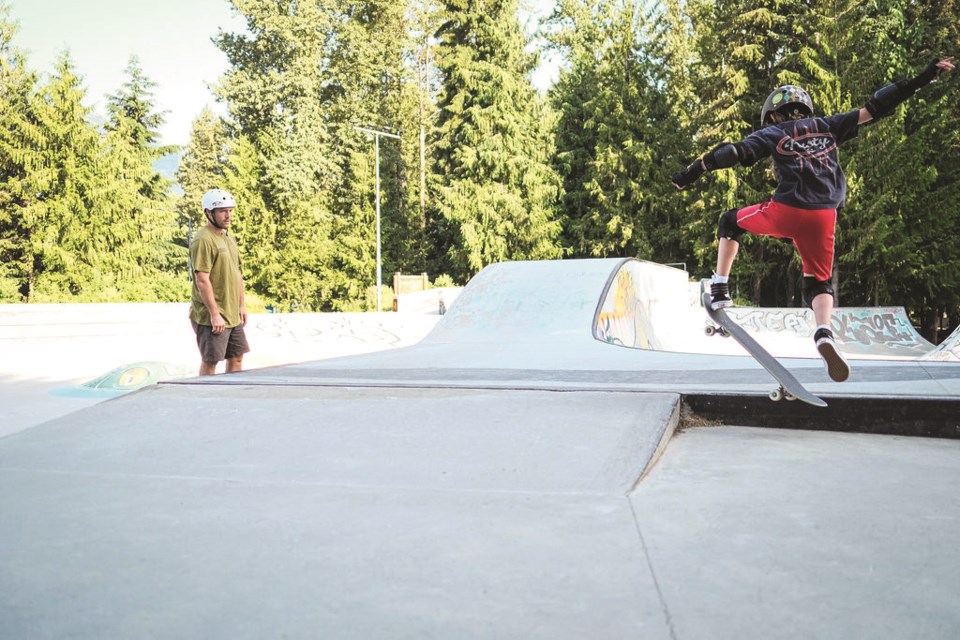 One of the Whistler Skateboard Club camp kids practises his ollie under the watchful eye of guest coach Adam Hopkins. Irie Smith

“It was really fun because the kids got to see a calibre of skateboarding in the park that not many people get to witness in person,” said Harrison Gray, co-owner of the WSC.

“But the camps have been fun. The kids have been beyond stoked, so it’s fun to see. It brings me back to being a kid again seeing the absolute stoke and joy over learning a new trick and getting all the hype from your friends.”

But it wasn’t just the kids who were stoked to be there. Hopkins himself was pumped about being able to give back and help grow the same kind of skateboard community he had as a kid, something he believes is incredibly important for growing the sport.

“Community was so instilled in me as a kid from me going to skateparks,” said Hopkins. “The older guys would sort of look out for you a little bit, let you know if you are acting up. They’re like big brothers in a sense.

The camp consisted of 12 kids with a wide range of skill levels that included some who were stepping on a board for the first time, all the way to kids who have been skating for a couple years. According to Hopkins, for some kids the focus was on getting them used to balancing on the board, while others were learning how to drop in on ramps and get their ollies higher.

According to both Gray and Hopkins, the best part of the three-day camp was seeing the progress the kids had made by the end of the final day.

“There was one kid that I was working with that was just excelling every day,” said Hopkins.

“From Day 1 to Day 3 his progression was pretty phenomenal. He went from Day 1 ollieing up something that was three inches tall to actually ollieing over a skateboard on its side on the ground, so that’s a pretty good progression for just a couple days.”

According to WSC head coach Truth Smith, there is a trickledown effect from having someone like Hopkins come out to the camps. The kids learn a lot, but 17-year-old Smith also gained insights on how to be a better coach, all while taking away some tips and tricks to improve his own skills as well.

“As a skateboarder, riding and coaching with Adam pushes me to learn new stuff, add new details such as grabs to tricks and we can feed ideas off each other on what tricks to do on certain features at the skatepark,” said Smith.

“He’s a great mentor for me and just having the opportunity to watch him skateboard helps me a lot, as I can see what type of techniques he shows the kids as well as how he helps them overcome the little fears they get. Overall, just a huge mentor to me.”

The WSC will be running weekly camps in Whistler every Monday to Wednesday until October, as well as weekly camps through August in Pemberton and Squamish from Tuesday to Thursday. They are also hoping to run a couple more pro sessions this summer and are in the works of bringing a sanctioned Canada Skateboard event to the Whistler Skate Park.

“We are working with Canada Skateboard to get [our event] sanctioned so they can start using it for a national ranking list. We are talking about having cash prizing and actually hopefully bringing in some top-class skateboarders,” said Gray, who also works as a judge for Canada Skateboard.

“The next big thing is trying to ramp up to bring a world-class calibre event to town. Whistler has been on the forefront of the Olympics, snowboarding, biking and skiing so it only makes sense that they are on the forefront of competitions in skateboarding too.”

As for Hopkins, who fell short of the cut for the upcoming Tokyo Olympics, he will be spending his summer doing a couple projects and competitions both internationally and in Canada, as well as taking some time for himself before re-focusing on making the cut for the 2024 Games in Paris.

“I got invited to a contest in Russia at the end of July but they had a flood out there so I’m just waiting to hear on confirmation of that, and I’m off to the Kootenays for this Red Bull project on Monday,” said Hopkins, who also hopes to get back to Whistler at least one more time this summer.

“But after the three years of heading towards the Olympics, I’m going to keep skating and pushing forward, but I’m also going to relax a little bit.”

Truth Smith and the Whistler Skateboard Club look to grow the sport among local youth
Jun 3, 2021 9:00 AM