Whistler Skating Club athletes showed off their skills at the Lower Mainland competition last weekend
Dec 1, 2019 12:00 AM By: Megan Lalonde 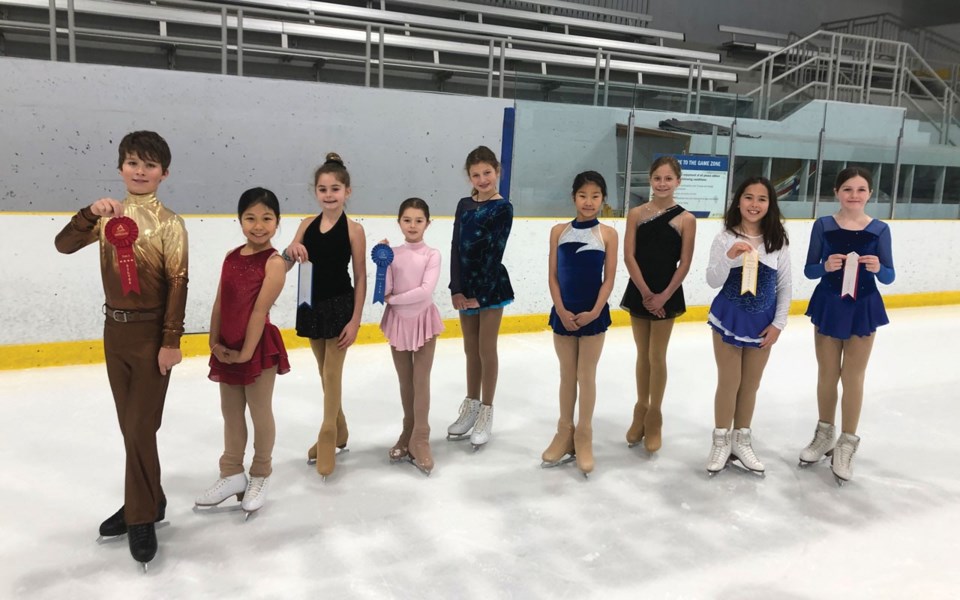 WHISTLER SKATING CLUB (WSC) athletes had a shiny start to the holiday season, bringing home a wide range of medals—and metals, for that matter—from the annual Jingle Blades competition, held in Mission Nov. 22 to 24.

The weekend marked WSC skater Nana Matsunaga's first-ever performance at the pre-juvenile competition level, representing a significant leap up in the competitive stream from the recreational "Star" divisions she has previously competed in.

"I was nervous, because it was my first time. I didn't know how it was going to be really, but after my first warm-up practice, I did a few single jumps and I actually felt pretty good and felt, like, really calm," said Matsunaga.

At the end of the day, Matsunaga said she was pleased with how she fared amongst her new competition, after working hard to land elements like her double-sow and double-double jump combination consistently.

"I think I could have done just a little bit better, but for my first time doing [pre]-juvenile, I was pretty happy," she said, adding, "I did fall, but I'm going to work [harder] and next competition I'm going to try to land it—and I will."

According to coach Dianne Diamond, it was Matsunaga's strong performance, transitions and interpretation that resulted in not just a ninth-place ranking, but an improved score on her program compared to her previous competition in October.

Matsunaga wasn't the only WSC member to skate well over the weekend, with teammate Parker Watts coming out on top on day one of the competition. In addition to being the only skater in her Star 3 competition group to earn gold, another highlight of the weekend came for Watts when she landed her axel.

"I've been working on it since May," she explained. "In October I landed it—after the October competition but before this competition—and it was put into my solo, and I had to try and land it in my [competition] solo. I was kind of nervous."

Rio Povoden also received gold over the weekend, earning the Star 2 division's highest-possible ranking after "executing her spirals, spins and jumps to a high standard" and "connecting beautifully with the music," during her solo skate, according to her coach.

Said Povoden, "It was my first time getting a gold so I'm really happy.

"I'm proud of my spirals, because Dianne's always telling me, 'Rio, try to get your leg higher.' When my mom videoed it, I looked at it and thought it had improved a little bit—and I got [ranked] gold on them."

Like her teammate Watts, Povoden was the only skater to receive a gold ribbon in her group at Jingle Blades.

"They all skated their very best and you can't do more than that," said Diamond. "I was really proud of every single one of them."

Among the hundreds of young skaters who turned up to show off their skills at Jingle Blades, several other WSC skaters also performed well at the weekend competition. Moka Higashi successfully landed her axel to subsequently land herself in sixth in the Star 4 U10 division—her first time competing in the tough category. Ethan Adanac also jumped up a level, with his first appearance in the Star 3 boys division resulting in a silver ranking, thanks to a strong set of jumps and an impressive combination spin.

Clubmate Teia Povoden placed fifth overall in Star 4 girls U13 after landing her axel and completing all the elements of her program, while Nina Laferriere also completed all her elements to earn the overall bronze in her Star 2 girls division. Fellow Star 2 skater Danielle Bagnall quickly recovered after tripping mid-program to execute all of her jumps with "great height and speed," according to Diamond, receiving a silver ribbon in the process, while the WSC's Carol Lynn Gave also skated away with a silver ribbon in her Star 2 group.

Next up, Whistler skaters are preparing for their club's annual Starry Night Holiday Skating Performance and community skate, set to take place at Meadow Park Sports Centre on Friday, Dec. 13 from 6 p.m. to 9 p.m. The event will also feature a guest performance from up-and-coming Team BC skater Gabriel Blumenthal.