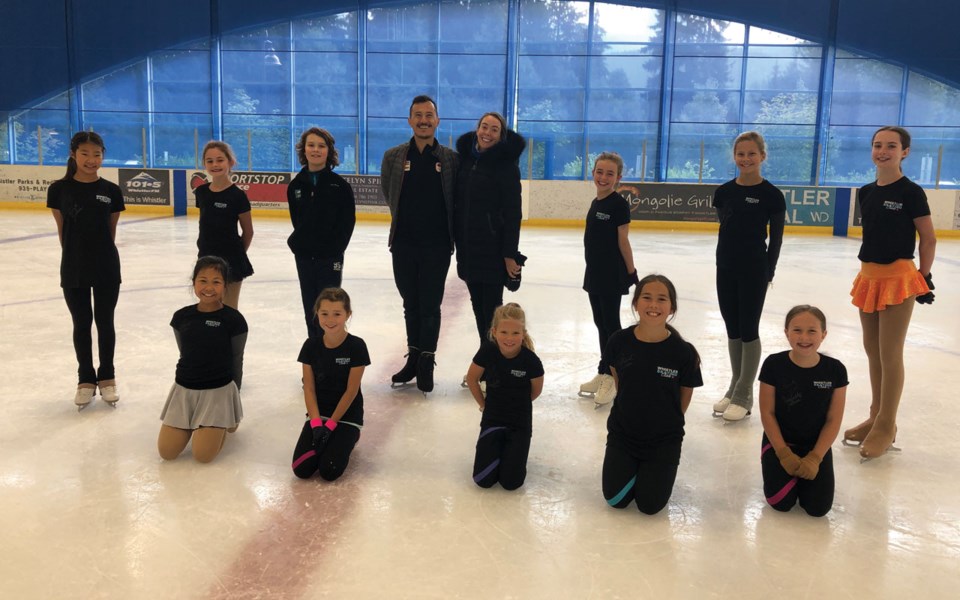 In a way, Patrick Chan has come full circle.

The star Canadian figure skater made his Olympic debut in 2010 in Vancouver and now, 10 years later, he is teaching the next generation of skaters at the host Olympic resort in Whistler.

Chan was thrilled for the opportunity to instruct the young skaters, aged eight to 12.

“They’re all pretty young and up and coming, so we’re just there to lend our knowledge and our experience,” he said. “We’re giving the kids a sense of what high-level training would look like, and the skills and the basic fundamentals that are important.”

Chan, a 2018 Olympic gold medallist and three-time world champion, acknowledged that there sometimes can be “shock value” of having a high-profile person come in, preventing the message’s absorption. However, he described the Whistlerites as “like sponges,” ready to learn.

“That’s the beauty of working with kids, especially at such a young age. They don’t really care who you are,” he said. “They may have seen you skate a little bit on TV, but some of them are too young to have seen the extent of my career.

“I like that, though. There’s no formalities. We get right to the work.”

In fact, Chan acknowledged being the one more likely to have butterflies as he hones his coaching techniques.

“It’s intimidating as well, I’ll admit it. I had a pretty successful career in figure skating, but in the last three years, I feel that I developed my teaching ability,” he said. “It’s one thing to be able to do it in your own body, but to translate it and put it into words that an eight-year-old can understand, it is challenging.

“The art of coaching is how to communicate properly and clearly. Depending on the personality of the skaters, some ways of teaching work and others don’t.”

In addition to zeroing in on the technical side, Chan and Putnam also sought to have the skaters embrace the sport’s creative elements as part of their exercises.

“There’s no rules. You can improvise, do what you want. There’s no wrong way of doing things,” he said. “We turned down the lights in the rink. We turned on the disco lights, we played some music and just had them move to bring out the creative side of their personalities.”

Chan was proud to see noticeable gains from all 11 athletes by the time the week was winding down.

“Near the end of the week, it was so satisfying to see these kids improve. Day 1, Day 2 was just getting comfortable with each other and Day 3, Day 4, we made some progress,” he said.

Coach Dianne Diamond said Chan and Putnam came for Week 6 of the club’s summer training, with two-and-a-half hours of on-ice action and an hour of conditioning each day.

“Across the board, we saw huge improvements,” she said. “When someone comes in with certain expectations, your athletes really try to deliver. I think that him just being present and having those expectations of our skaters made them step up.

“At the end of four days of training with him, there was a whole new level, which was exciting to see.”

Diamond said it was beneficial for the skaters to see Chan in action, noting the finer points of his approach—such as his edges, turns, and step sequences—were all dialled in.

“He has unbelievable power, strength, agility. He’s got it all,” she said, adding that she captured plenty on video for future review with the athletes.

While having Chan at the camp was huge for all the skaters, Diamond said his presence is extra special for Ethan Adanac, the lone boy.

“I want to show him that it’s an incredible sport for boys. It’s athletic. It’s powerful. It’s the full picture,” Diamond said.

Adanac said it was “really exciting” to work with Chan, taking inspiration from seeing a man in the sport. As well, he also improved his skills on the ice.

“We worked a lot on jumps and spins. He really helped me land my axel,” he said. “He told me to push my heel down so my leg was straight instead of bent and loose.

“Patrick Chan, the athlete, is my hero, and Patrick the coach is just a really cool guy, and it was so much fun,” he added.

Both Diamond and Chan expressed interest in maintaining the relationship, with Chan saying he appreciated how supportive the athletes are of one another.

“That’s something you can’t teach and they really showed that they were eager to learn while encouraging each other,” he said.

Looking ahead to this winter, Diamond said Skate Canada may have competitions of some kind ready to go in early 2021, though it’s as yet uncertain how those will look.

In the meantime, the club has brought in another Olympian, Britt Tilston (née Janyk), to help athletes with goal setting, especially in this challenging time.

“Without competitions, you have to break things down a little bit more and see things more day by day,” Diamond said.