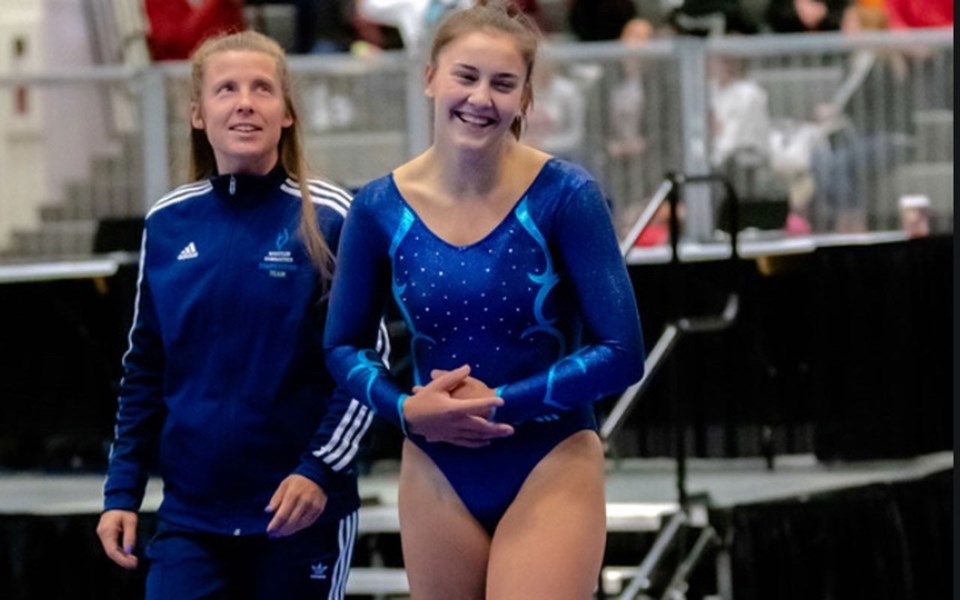 OFF TO JAPAN Whistler's Gabby Flynn is heading to next month's World Age Group Competition in Tokyo. <ParaStyle:CUTLINE\:CUTLINE Credit>Photo submitted

For her 18th birthday earlier this year, Gabby Flynn got a tattoo.

Though it's inked inconspicuously, the Flynn family motto has plenty of meaning for the Whistler trampolinist.

"Our family motto is 'Not without danger,' so me, my brother, my sister and my dad are all Flynns, and we all have that tattooed in Latin somewhere on our body," she said. "It perfectly works for our family. We're some crazy people and everything we do tends to be a little outrageous."

It's that attitude that's helped the Whistler Gymnastics alum qualify for her first international competition, the World Age Group Competition in Tokyo, Japan from Dec. 5 to 8. Flynn, competing in the girls 17-to-21 age category, qualified in three events: individual, double mini and synchronized with teammate Maja Bonham.

In individual competition, Flynn plans to bust out a relatively new routine with three triples and nine doubles.

Having recently moved to Burnaby, Flynn is training five times a week with the Shasta Trampoline Club to get ready for the competition. Though grateful for what she accomplished in Whistler, Flynn appreciates the chance to train with athletes who are on track for the Olympics as early as next year to help her reach her full potential.

"It's really been amazing here working with people who are at a higher level than me, who I can really look up to," she said. "My coach obviously has lots of international experience ... She's taught me what to expect from an international competition."

Early on in her career, Flynn worked alongside her Whistler teammates as they all tried to outdo one another, and she feels that feeling again with Shasta as she strives for greatness.

"We would always push each other, so if they did it, we'd all do it," she said. "We'd always just get on the same page and would always be building our skills and pushing each other. It's great to get back to that kind of environment by being constantly pushed by my teammates.

"It's really fun to have people say, 'Of course you can do it!' It's really positive and fun and happy."

In Japan, Flynn is looking to put up, primarily, a performance with which she's satisfied. That said, if she found herself atop the podium, she wouldn't complain.

"If I could win, that would be pretty awesome, but going into competition, normally it's not about podiums and medals," she said. "My last two national championships medals, I gave to my coach for her daughter, who would probably appreciate them more than I do.

"Going into competition is more about proving to myself that I can do it and that I deserve to be on Team Canada."

Acknowledging that working on multiple routines at once can make it difficult to land those she's competing with, Flynn is also hopeful to find success with the ones she tries in Japan.

"It's a lot of skill. It's a lot of mental preparation going into it. It's hard on your body," she said. "Being able to finish my routines, to do that at the competition and do it as well as I know I can do it, is one of my big goals."

Whistler coach Tanya Liquorish is proud to see Flynn reach the level that she has.

"She works so hard. I knew she had a good chance," she said. "She went out of her way this year to really focus on everything.

"She's determined and fearless—the most fearless athlete I've ever met—so I think that contributes a lot."

Liquorish added that heading to a top-line international competition will give Flynn a true taste of what she's up against and how she must develop to achieve her goals.

"It's going to give her a sense of recognition and understanding what the challenges will be on an international level at this point," she said. "It'll also give her more insight into her goal of the 2024 Olympics and give her some insight of where she needs to get to to qualify."