Karsten Madsen completed an Everesting challenge for COVID-19 relief
May 29, 2020 1:00 AM By: Dan Falloon 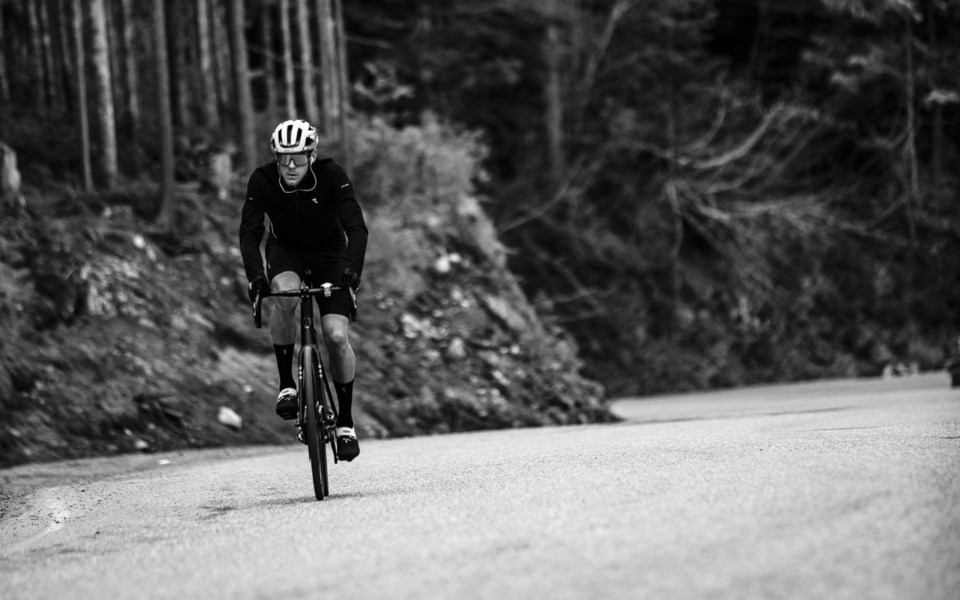 Karsten Madsen completes his Everesting challenge on May 23. <ParaStyle:CUTLINE- credit>Photo by Matthew Tongue

So taking part in a fundraiser that saw Whistler triathlete Karsten Madsen bike an elevation gain equivalent to the Himalayan heights on May 23 in support of COVID-19 relief efforts seemed like a perfect match.

By completing just over 38 loops of a predesigned route in Bayshores and Kadenwood, Madsen ascended the 8,848 metres in 11-and-a-half hours as part of Rebecca's Giddy Up Challenge, organized by American athlete Rebecca Rusch.

Noting that his longest prior competitive ride was roughly four-and-a-half hours and his longest training ride was seven, Madsen appreciated the support from people along the course, including drivers giving a friendly honk or friends playing songs such as Miley Cyrus' "The Climb" as he went up or Fall Out Boy's "Sugar, We're Going Down." He also credited his parents and sister for helping him fuel properly to complete the challenge, taking only seven quick pee breaks.

"Where the struggle came in was around Hour 8," he said. "My mind was starting to lose it and my heart rate was no longer responding. It was falling the other way where you can't elevate it."

However, Madsen took two ibuprofens and chugged a flat Coca-Cola, and soon enough, bounced back.

"I got back to riding laps that were on par with near the beginning," he said. "Then near the finish, more people started coming out and the sun started peeking out.

"It was a pretty epic end to a pretty sweet day."

Rusch's movement supports COVID-19 relief through the Be Good Foundation. The funds raised will go to multiple different initiatives, including getting bicycles to frontline workers and supporting vaccine research.

While raising money to get bikes to people is close to Madsen's heart, with many events on hold until a vaccine is found, giving those efforts a boost is key.

"The main backstory to it, the why, is that COVID-19 for an athlete has been an absolute disaster," he said. "You realize pretty quick that your livelihood is directly affected by events. Even having other aspects of a coaching company and other income streams, they all revolve around that one literal thing."

As part of the day, he also collected food items for the Whistler Food Bank.

Seeing people come together (figuratively) to support the cause, or even just be inspired to hop on their own bike, was a rush.

"That part, racing had never given me that sensation," he said.

While eager to get back to racing, Madsen said he looks forward to completing similar adventurous challenges when he eventually retires.

"It was a window into a world of the logical next step when the finish-line racing is done," he said. "But it's funny, my knee-jerk reaction when I first finished was 'I'm never doing that again.'"

Leading up to the challenge, Madsen said that he's coped with the COVID world by continuing to train after attending winter training camps in Arizona and Portugal.

"It's a way of life and there's a lot of identity that you pull through your racing."

That said, though the relationships and camaraderie built through racing are tested at this time, Madsen said he's able to better explore Whistler and settle in after moving to the resort before the 2019 race season.

"For once, I actually get a chance to really explore my own backyard and foster relationships within the community that you might not really have had the time to do because you're flying on a jet somewhere different to race and you're always in and out," he said.

With prize money from events dried up, and sponsor companies also struggling, Madsen has leaned on his coaching business for income. Though many of his clients are amateur athletes, many of them stuck to it even though their future events were wiped out indefinitely.

"I've been super fortunate that the athletes that I am coaching, a lot of them have taken a priority in their own wellbeing and [have an] understanding that sticking to a program and a plan, having some sort of direction to follow in this time, was very helpful," he said.