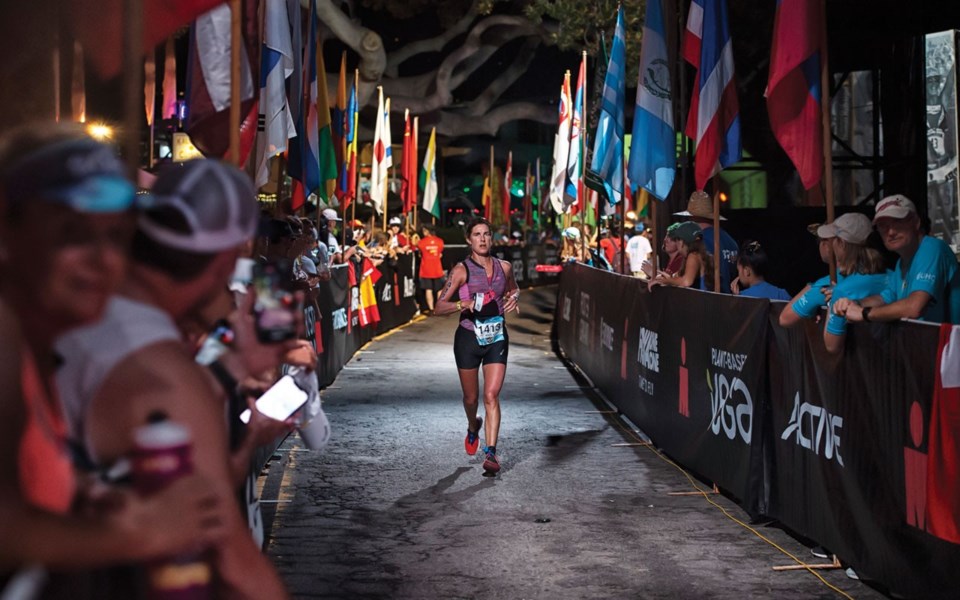 In her fourth trip to the Ironman World Championships in Kailua-Kona, Hawaii, Whistler triathlete Marla Zucht put up by far her best result.

The hard data is there, but Zucht was especially proud of her time considering the Oct. 12 race posed arguably the most difficult conditions of her four attempts.

"The winds were definitely stronger. You get these really tough crosswinds that blow unbuffered across the whole lava fields there. They are intimidating for even the best riders trying to hold onto their bikes," she said. "I just have to keep reminding myself, 'I don't think I can get blown over.'"

Zucht also noted the stifling heat, which while expected, was difficult to account for during her local training.

"It was 31 degrees and stayed pretty much consistently hot the whole time, which on the one hand, it feels nice to be in, but it's also kind of daunting for the race experience when I spend all my time up here training and having left pretty cold temperatures," she said.

Now a veteran of the Hawaiian race, Zucht said her experience started to pay off. With the exception of a minor change or two, the course has stayed the same each time, allowing her to know what she's in for.

"I just felt like I raced a smart race, being that it's my fourth time there, having familiarity with the course and the elements," she said. "That's what makes the course so challenging, it really is the elements. The ocean swim chafes your body pretty early on into the swim, then the bike course, those winds are so daunting, and the heat on the marathon is mentally and physically tough to get through."

Given what she was up against, Zucht said her hydration and nutrition plans worked out, and she managed to maintain the proper attitude through the whole 140.6 miles (or 226.3 kilometres).

"I felt physically good the whole time, and I kept positive," she said. "It's something pretty amazing watching the sunset over the Pacific Ocean as you're crossing the finish line."

The fact that Zucht qualified for World Championships earlier in the summer made a big difference, as she punched her ticket in mid-May in Santa Rosa, Calif. as opposed to the route she used her first two times, earning her spot at the end of July here in Whistler.

"Qualifying in Whistler at the end of July, there's definitely less time to get ready," she said, pointing out travel logistics to the sold-out Big Island as well as physical preparations are difficult. "Being physically and mentally prepared for it definitely gave me more time to be thinking about it and be prepared for it."

In 2020, Zucht hopes to qualify earlier in the year again, but she'll have to choose a new venue. With the Subaru Ironman Canada leaving Whistler to return to Penticton and moving to August, the Santa Rosa race is filling Whistler's late-July slot on the calendar.

"Instead, they've replaced [Santa Rosa's May slot] with an Ironman in St. George, Utah, which is at the beginning of May. I've signed up to do that one with a similar idea and hope that I will qualify early there," she said.

As with any race that requires qualification, nothing is guaranteed. Each time Zucht has competed, she's made sure to soak it all in as if it's the last time she'll get to go.