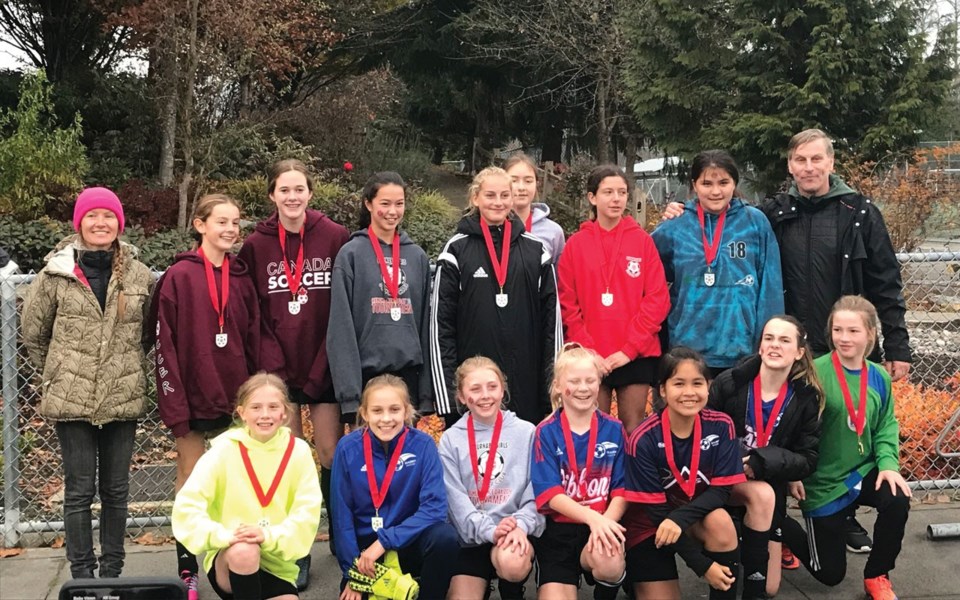 The Whistler U14 girls' soccer team has a bit of pep in its step after a big victory on Remembrance Day weekend.

The squad, which boasts players from Whistler, Pemberton, Mount Currie and Lil'wat Nation, came home from Burnaby with a tournament win after posting three wins and a draw in the Burnaby Girls Soccer Club's annual one-day tournament on Nov. 11.

Coach Graham Murphy noted that, to cram all four games into one day, the tournament format is radically different from regular soccer, with six players a side, including a goalie, taking short shifts as opposed to the regular 11. Players change on the fly and normal soccer plays such as throw-ins and corner kicks are not used in order to keep the game going. Murphy credited the players for adapting to the new approach while also managing to stay focused through three separate 90-minute breaks between contests.

"They were staying together as a team, working hard for each other and being disciplined in how they play," he said. "They were having a lot of fun."

Whistler started out with a 3-2 win over Squamish, following it up with victories of 3-1 over CMFSC and 3-2 over North Shore. The fourth game, against West Coast was a winner-take-all. However, it ended in a scoreless draw, and Whistler earned the tournament triumph by virtue of having already banked more points.

Murphy said the North Shore game was a turning point, however, as Whistler found itself trailing 1-0 and 2-1, eventually finding the tying goal and winning the game in the final minute.

All in all, the tournament provided a welcome reset for the club, as well as a chance to get to know Murphy a bit better, as he's only headed up the team for roughly the past month.

He added that organization was central to the win, especially with the wild on-the-fly format, and that assistant coach Valeinna Dimma and manager Stephany Smith were lifesavers in that department.

"The girls have been playing 11 vs. 11, so it was really good for them. Some of them have only just started playing 11 a side," he said. "They've been having a hard go of it in league play, but something just kind of clicked over the last couple weeks where they've started to come together and understand each other as a team."

Murphy saw the benefits of the tournament win carry over into their first game after the tournament, as the players carried themselves with a bit more confidence.

"Winning something like this, realizing that it's a team sport and they're there for each other and building their confidence [is key]," he said. "Something changed last weekend and you can see their confidence growing."

In his short time with the team, Murphy said he's sought to instil the value of practice, adding that the games are a showcase for what they learned during the week.

"They've really bought in to our training philosophies, how we're coaching them, how hard they're working for each other and wholly understanding the importance of the training," he said.