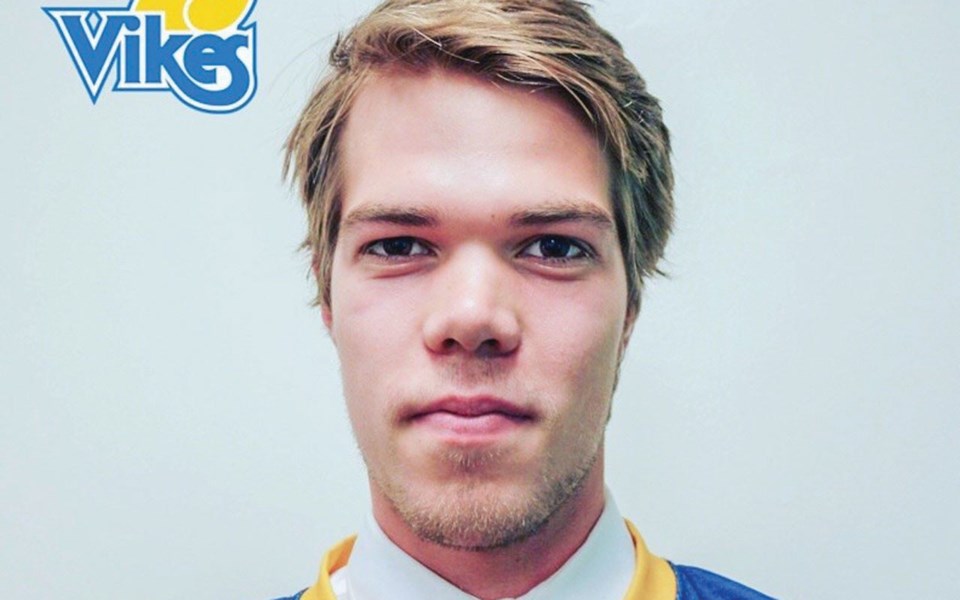 ON THE BLUELINE UVic defenceman Ryan Grills is hoping for a strong second half of the BCIHL season. Photo courtesy of the UVic Vikes

After helping the University of Victoria Vikes to a surprise championship last season, it's been a bit tougher for Ryan Grills and Co. in 2017-18.

After significant roster turnover, the Vikes have won just two of 12 games this season and have struggled to find consistent scoring so far this year.

"We were fortunate to have a really high scoring team last year and we lost some of our top scorers. We had to find new scorers from within and from the new recruits for the year," Grills said.

Grills, who has played six games on defence this year, feels he's growing more accustomed to the BC Intercollegiate Hockey League in his third season.

"I'm definitely feeling a lot more confident and comfortable in the league. That comes from knowing the teams, knowing the players, knowing how they work and earning ice time as we go," he said. "Having the coaches know me and know my style of play has definitely helped me this year and hopefully it continues to in the second half."

That noted, though, he's seeing increased responsibility off the ice, as his business program has ramped up significantly this year.

"This year has been a little harder to manage the workload of school and hockey. The workload has increased quite a bit, so that's conflicted at times with hockey, but I'm still really enjoying playing for the school," he said. "(Second year) is considered the core year in the business program with a lot of really focused classes and I'm really learning what I like most about the program.

"I've enjoyed the increase in schooling and learning what I'm most passionate about."

Though the season has been a struggle for the Vikes so far, as they sit seven points out of a playoff spot, they can take some inspiration from last year's championship-winning club. Last year's team squeaked into the playoffs before pulling off two upsets to capture the crown.

"It was incredible. Going into the playoffs, we knew we had a very tough route because we had the No. 1-ranked team, SFU, in the first series. After we swept them in two games, it really increased our confidence and we knew that Trinity (Western) was a team that we could beat," he said. Though the Vikes lost the first game at home, they headed to Langley to win a pair and clinch the championship.

If the Vikes find success, it could come from another Whistlerite. Thomas Cankovic hasn't yet scored in 10 games with the team, but after a 48-point season with the Jr. B Creston Valley Thunder Cats in 2016-17, he should be poised to break through sooner rather than later.

"I definitely have the monkey on my back right now, not being able to get points but for sure, it'll come this semester," Cankovic said.

The 20-year-old opted not to return for his overage season in Creston Valley, instead choosing to pursue his education in economics.

If he could also play hockey with a childhood friend in Grills, so much the better.

And even though the start of the season hasn't gone to plan, Cankovic believes a stronger second half is possible.

"We'll definitely have to work for it because we're quite a few points back but I don't put it past us," he said. "We have some very good players and we'll work hard."