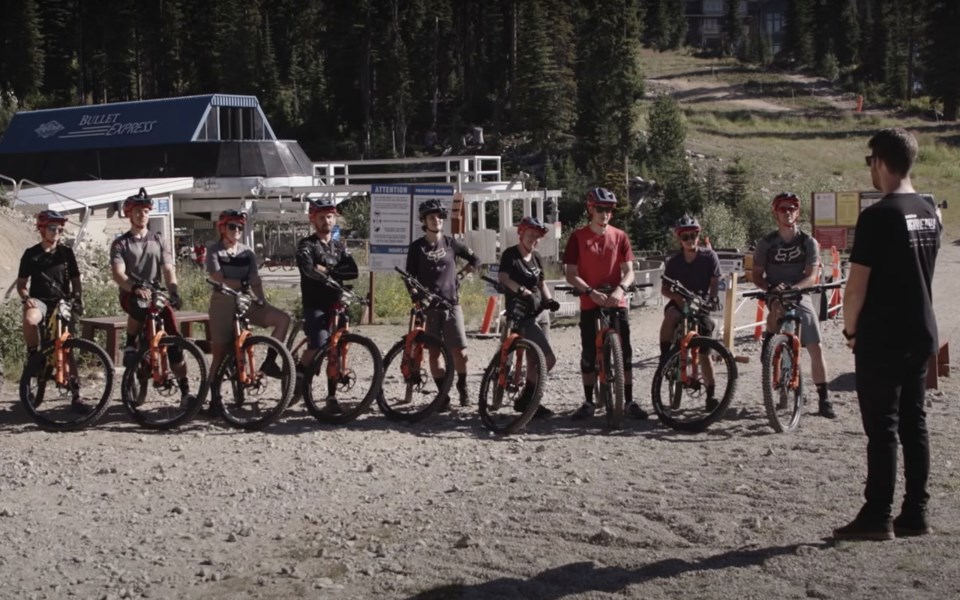 Whistler residents Julia Long and Misa Pacakova are two of 10 athletes who vied for $25,000 and a one-year contract with Orbea Bikes during the show, filmed over two weeks at Big White earlier this summer. Episode 3 drops on Oct. 29, with the remaining seven instalments coming every Thursday thereafter.

Long said as a privately funded enduro athlete, she was looking for that financial boost.

“Winning $25,000 would help a lot. I’d have the opportunity to race internationally and obviously, having a bike deal helps a lot,” she said. “That was the main motivation, and it was also being part of a super cool, once-in-a-lifetime experience as well.”

Squamish’s Angie McKirdy, who works as an X-ray technician at the Whistler Health Care Centre, joined up because it was a chance to boost her career.

Pacakova, a ski patroller originally from the Czech Republic, acknowledged that she thought it was more of a competition, but made some peace after learning about the reality elements.

“I was nervous, but I was already in it,” she said. “I was just excited to be part of it.”

In addition to McKirdy, two other Squamish residents rounded out the women’s field in Jo Peters and Nicole Kennedy, with the latter being the first casualty after struggling in the first two challenges.

McKirdy lost out on the first bike-building challenge but redeemed herself in the next one—a race—where she came down as the fastest woman.

Going in, she sought to perfect her riding as much as possible and, to this point, it’s paid off.

Through two episodes, anyway, the atmosphere has been mostly cooperative and friendly, with the tension primarily coming from the challenges as opposed to interpersonal conflicts.

“For the most part, I think, mountain bikers are all pretty accepting and have a good attitude,” McKirdy said. “That’s consistent with all the contestants that were in the show. I’d love to be able to go on a ride with anybody that was in the show.”

Long, meanwhile, said the atmosphere was fairly laid back away from the bike park.

“Mountain bikers … maybe aren’t as dramatic as some people in those reality TV shows,” she said. “Everyone got along really well. Even in the off-time, we were playing cards every single night, sometimes having dinners together.”

Having so many familiar faces from the Sea to Sky helped, according to Pacakova.

“I was nervous until that point, but then it was, ‘I’m just going to ride bikes with girls I know,’” she said.

Both Pacakova and Long feel the show will help them as they progress in their careers, as they’ve added hundreds of Instagram followers since the show started airing.

“It definitely helps with becoming a rider and being present in the mountain bike industry,” Long said. “A lot of things nowadays are based on media posts.

“Being out there all over the internet helps a bit, depending on how they portray me.”

The contestants have had some mixed emotions as the first two episodes have come out, recognizing that it’s difficult to square one’s image of oneself with how one is presented from the selections made from thousands of hours of footage. McKirdy, in particular, took flak for a confessional comment that she felt Kennedy should have lost the first challenge rather than herself.

“I made the mistake of reading the [YouTube] comment section for the first episode. It definitely affected my opinion of the show and my overall mood,” she said. “It turned out a little bit sad for the next couple of days and then I cut myself off from reading the comment section.

“I know who I am and my community knows who I am … They’re talking about a character that’s in my image, not who I am.”

Local rider Christina Chappetta, already a presenter with Pinkbike, served as head judge for the series and is eager for a second season, as plans are already underway.

“It was kind of funny at first because obviously, I would have loved this opportunity to be a contestant, but I do have a really great job,” she said. “It’s a pretty surreal thing helping someone else have the opportunity of a lifetime.”

With her challenging position, Chappetta said it was difficult serving as a judge for people she knew, but she strived to remain impartial.

“I purposely did not look at who the contestants were. I kind of had an idea before I went there, but I wanted it to be a surprise,” she said. “It made it a little bit tricky on Day 1 just to make it clear, ‘I’m here as a judge. Nobody gets special privileges just because we’re friends and we’ve raced together for a couple of years.’”

The show initially accepted applications from all over the world, but had to scale down to Canadian-based riders once COVID-19 hit. Still, in addition to Pacakova, the show welcomed two Americans, a Kiwi, and a Russian.