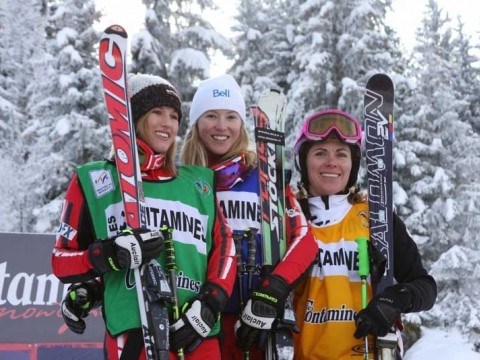 Ashleigh McIvor took home the gold medal at Les Contamines, France on Sunday, with teammate Julia Murray right behind her with the silver.

The podium places were met with excitement and pride back on home turf.

"I wish I was over there!" said Murray's mom Stephanie Sloan from her Whistler home.

She spoke to Julia after Sunday's race.

"They were tired after competing all day and then travelling (to the next competition venue) but she's very, very focused," said Sloan.

Sunday marked Murray's best finish this season. Her previous best World Cup results were a fourth and third place finish in the races before the silver medal finish at Les Contamines. These results have all but guaranteed her a place on Canada's Olympic team.

"These last few results have really helped me," she said. "In 2003 I made a speech to the IOC (International Olympic Committee) for having the Games in Vancouver and ever since this began, the Olympics have always been the main goal for me."

Sunday's race was followed by two more gold medal wins for the Canadians at the World Cup in Alpe d'Huez, France Tuesday Jan. 12, after Wednesday's scheduled finals were abandoned due to 40 cm of snow overnight.

Chris Delbosco won gold in the men's event and Kelsey Serwa brought home gold in the women's, based on performances from Tuesday's qualification round.

She is the only member of the women's ski cross team who doesn't have the added pressure of qualifying for the 2010 Games this season. As the reigning world champion McIvor is one of three athletes who have already guaranteed their place on the freestyle team.

Fifteen spots are still to be divided up on the Canadian team between ski cross, moguls and aerials competitors, based on their four top performances from the last two years.

"What was nice about today's win was I didn't advance because someone crashed," said McIvor. "It was really nice to come back to Les Contamines and finally race some air and some off camber doubles with good terrain and good flow it's one of those courses that when you get to the bottom, you want to go do it again!"

The Les Contamines race was originally scheduled for Saturday, Jan. 9 but was postponed due to thick fog. By Sunday the sun was shining and conditions were good.

On the men's side, France's Xavier Kuhn took the gold while Tomas Kraus of the Czech Republic won bronze.

The team is now heading to Ontario for its next World Cup races at Blue Mountain on Jan. 20.