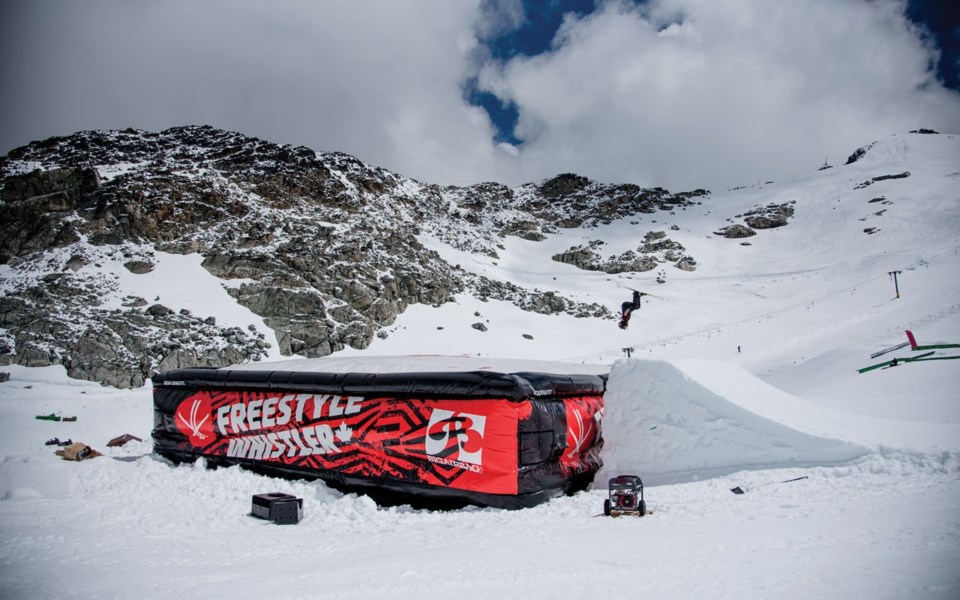 One element of the Gemini Freestyle Centre, the airbag, is already in operation and well-used. Photo by Meghan LaHatte

IT'S BEEN A long time coming, but the dream of bringing a national freestyle training centre to Whistler appears to be well on its way.

Earlier this month, the National Training Centre (NTC) board signed a naming rights pact with American cryptocurrency exchange and custodian Gemini Trust Company, giving the project, which includes a moguls training and event site and an airbag training facility, the financial wherewithal to get across the finish line.

NTC Board member Julia Smart declined to say how much Gemini paid for the naming rights, but noted that combined with gala events the past two years and friends and family fundraising initiatives, the group had garnered enough to match the $300,000 WBF grant. The deal is initially for three years with an option for two more.

"It will last for five years, we're hoping," she said.

Gemini was founded by skiing fans and Olympic rowers Cameron and Tyler Winklevoss, who the public may know best in their role in the creation of Facebook and their portrayal by Armie Hammer in The Social Network. The connection was forged by Smart's husband, John, himself a former Olympian who now runs Momentum Ski Camps. The Winklevosses have been attending the camp for the past three summers, and this past summer, the three were riding the gondola together when John mentioned the training centre.

"He just happened to say, 'Hey guys, this is the location where we're volunteering to try to build this training centre for the local club,'" she said. "They were interested in hearing about the project, we followed up, and literally that casual conversation going down the gondola obviously struck a chord with them and they decided to come on board and match those funds."

In a release, Gemini president Cameron Winklevoss said he was pleased to pitch in.

"Whether you are tackling a mogul field, developing a new idea, or building a business, perseverance and conviction—two of our core values at Gemini—are key to meeting challenges when they inevitably arise," said Winklevoss, who was not available for an interview. "We are proud to sponsor the National Training Centre for Freestyle Skiing that will provide facilities to train and develop the champions of the future."

Smart explained that the process of planning the training centre has been a complicated one with numerous twists and turns. It was challenging enough to get the ball rolling and signing a memorandum of understanding with Whistler Blackcomb (WB) in 2015.

Smart noted that the board presented to the WB Foundation shortly after signing the MOU with WB and were supported with a $300,000 grant, with the caveat that it needed to be matched. Finding a deep-pocketed sponsor that wouldn't trample on WB's toes proved challenging.

"We weren't able to bring a sponsor to the table that had any kind of conflict with the mountain sponsors, so that was a bit of a roadblock at first. Understandably, they didn't want to have anyone that was in conflict with their existing sponsors," she said.

The Vail Resorts takeover of WB in 2016 threw another wrench into the project, forcing the board to reassess its plans. More recently, when Vail Resorts upgraded its lifts on Blackcomb, the board needed to change the location of the centre from its planned site at Catskinner. Working with WB vice-president of mountain operations Doug MacFarlane, Smart believes the new location on Sorcerer will work well.

"It's going to be in a prime location, so lots of people will be able to see the kids as they train and compete and jump on the airbag," she said. "The kids who do all the disciplines of freestyle will be able to cruise through the park, hit the halfpipe, hit the airbag, hit the mogul course, do everything in one lap if they wanted to."

Smart said the organizers have the winter to finalize planning, and should be ready to break ground once the snow melts this spring. Under the guidance of project managers Mick Gannon, Marie-Claire Gravel and Rick Schwinghammer, the centre will be ready to go for the 2020-21 ski season.

Still, the board needs to raise roughly $35,000 to meet its targets. Smart hopes to reach that goal this Saturday, Nov. 30 when the club holds its third Ullr Gala at the GLC. Tickets are $75 and are available online at https://freestylewhistler.com/national-training-centre/gala-fundraiser-november-30th-2019.

"We have a budget shortfall to meet our current budgeting," Smart said. "You never know how things go and things could cost more than you expected, but we hope to make [up] the shortfall.

"It won't affect whether we do the build. We'll still do the build, but it might mean we have to do another gala next year if we fall short of our target. We really do hope that lots of people will buy tickets, come to the auction or to the event."

According to local up-and-coming moguls skiers, the new centre will make their lives easier and help them strive towards their goals of international success.

Daniel Gannon, a 15-year-old up-and-comer from Whistler, will be among the athletes to benefit most acutely from the centre. He's currently regularly training at Apex Mountain Ski Resort because he's outgrown Whistler's existing facilities, and appreciates the chance to prepare in his own backyard.

"It's super helpful to have our own full-sized mogul course here because the closest full-size mogul course we have is all the way in Apex, which is about a five-and-a-half-hour drive from here," he said. "You're not going to go for a weekend. You're going to go for a week or two, which means that we're going to miss a lot of school, and it takes a lot more time just to train."

While he's excited to see it happening, Gannon said the centre coming to Whistler didn't play a factor into his decision to pursue moguls, as it was a "very iffy" proposition, and was always into the discipline before it was announced.

Gannon explained that he started freestyle when he was eight, following in his older sister's footsteps. He had a quick affinity for moguls, and from there, he's regularly hit the top of the podium on circuits such as the provincial Timber Tour. He'll look to compete on the NorAm Cup circuit for the first time in 2019-20.

"As I got older, I felt like I understood moguls more and it was easier for me. A lot of the people I looked up to at first were in moguls as opposed to big air and slopestyle," he said. "I kind of aged into moguls and out of park."

Explaining that he also admired the moguls skiers in front of him while he was on the rise, Gannon said the centre will provide the same opportunity to young skiers.

"Now that we have the full course, more people will come to Whistler and more [higher-level] people will come," he said. "We can host NorAms and that kind of thing, which would let people my age and younger than me see the next level up in front of us.

"It'll inspire a lot more people to get into the sport."

While nothing is set in stone yet, Smart hopes to bring some major events to the centre fairly quickly, and possibly land Whistler's first freestyle FIS World Cup since 2002 and its first FIS World Cup of any kind since 2008.

"It would be nice for us to have a higher mogul event than the Timber Tours that we've been running," she said.

Meanwhile, Sam Cordell, speaking from a training camp in Apex, will look to make the jump to the national team this year as he competes on the NorAm Cup and Canada Cup loops. The 19-year-old acknowledges that he feels a jolt at the thought of perfecting his approach while also getting to sleep in his own bed at night.

"This [Apex] is basically where we do our training with the team full time, and it'd be super nice to just be able to train at home, not have to pick everything up just for training," he said. "We're still in B.C., which is a good thing, but the dream of training at home is awesome.

"It encourages me to ski, definitely, a lot more."

Freestyle Whistler moguls head coach Jeff Fairbairn appreciated Whistler Blackcomb for maintaining the existing course, and is thrilled to see the new project come around in order to benefit skiers of all ages and abilities.

"The course that we had was geared towards younger kids, but this one will be a little more challenging and it will definitely allow for more rigourous training, something that's more relevant to the high level of athlete that our club is starting to develop now," he said. "It's going to be great to have that facility, and with a quick turnaround time."

Fairbairn said the current setup means it will be just a quick gondola lap to the course. As well, the centre will feature beginner and intermediate options for those getting into moguls.

"There will be tons of options, not just for the moguls skiers of all levels, but for getting the kids ready," he said.

At a provincial level, Freestyle BC executive director Josh Dueck, a former Whistler resident, said having the facility in town would be a boon for moguls skiers in Western Canada.

"It's needed in our sport to have more of a centralized training opportunity that will satisfy the growth that we're experiencing right now," he said. "What kids are doing today to be competitive at a national and international level is quite demanding, so to have a high-quality and centralized training environment like Whistler is developing right now is central to the growth of our athletes and for our sport as a whole."