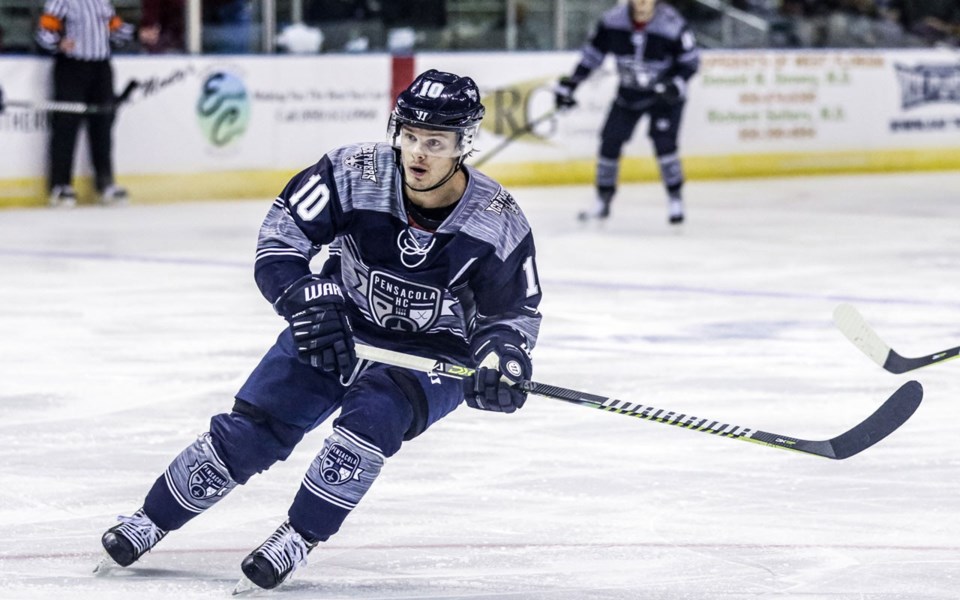 Piling up the points Whistler's Garrett Milan had four points in his first two games of the season with the Pensacola Ice Flyers.

When pondering his options for the 2019-20 campaign, Garrett Milan weighed a few more factors than he had previously.

In his first four professional seasons, the 28-year-old Whistler product started out with a new team in a new league each time, beginning with Debreceni HK in Hungary, continuing to the Edinburgh Capitals, Pensacola Ice Flyers and Germany's EV Lindau.

After coming back to Florida to finish last season with the Southern Professional Hockey League's Ice Flyers, Milan opted to return to a familiar spot and chase a title.

"When I came back from Europe last year, they definitely wanted to have me back," he said. "I love it down here. The fans are great. The organization is definitely a good place to play as well, so it was a no-brainer for me to come back last year.

"They protected me at the end of last season, so my rights stayed with them, which was a good thing."

While Milan was taking the temperature of some situations overseas, there wasn't anything as appealing as playing for a strong team, though perhaps in a lower tier, in a city where he could golf or hit the beach in his spare time.

"I was talking to a couple teams over in Europe again this offseason, but nothing really stuck with me, so I didn't really have that fire to go back there if I wasn't on a good team. I didn't want to be in that situation again, where you're on a bottom-end team in the league.

"I wanted to come back and win a championship here."

Milan and Co. got off to a great start to the President's Cup quest, as he assisted on all three goals in a 3-2 opening-night victory over the Roanoke Rail Dawgs on Oct. 18 before scoring the opening tally in a 2-1 win the next night.

Milan said the half-dozen returnees were some of the Ice Flyers' top players in 2018-19, while several of the new recruits are of a higher pedigree than ever before, sliding down from the higher tier East Coast Hockey League.

"A lot of guys came down from ECHL contracts; we have two strong goalies that are [NHL] draft picks here. We've got a good team on paper and it's been a good transition to the ice so far," he said. "It's just the first weekend, so you've got to take it in stride, but the first weekend went well for us, for sure."

Milan has worked to find chemistry with initial linemates Eddie Matsushima and Patrick Megannety, though the nature of North American hockey is such that the line could be broken up because one gets a call to a higher league, or if the team starts to struggle.

"There's a lot of turnover up and down, for sure. Guys leaving, guys coming, it's crazy," he said. "That's the tough thing about playing pro in North America. You try to build chemistry with your linemates, but obviously if certain games don't go well, the coach is going to definitely shake up the lines."

In the past two years, Milan has been on the receiving end of those call-ups, as he played three games with the ECHL's Atlanta Gladiators in 2017-18 and 15 games with the Greenville Swamp Rabbits in the same league last year. However, while talented players getting pushed down to Pensacola is helpful on a team level, it's also challenging for Milan's upward trajectory on a personal one.

"This year is definitely a weird year. There are so many players that were going to camps, that were signed already," said Milan, noting his offseason efforts were focused more on Europe than the ECHL. "We'll see what happens."

Off the ice, Milan acknowledges that even as one of the SPHL's star players, it's not a situation that's particularly lucrative. On the flipside, his expenses are covered and he and some teammates are housed in a beachfront condo, which helps.

"I definitely have to work during the summer," said Milan. "It's still decent, we're doing what we love and we're still getting paid to do it."