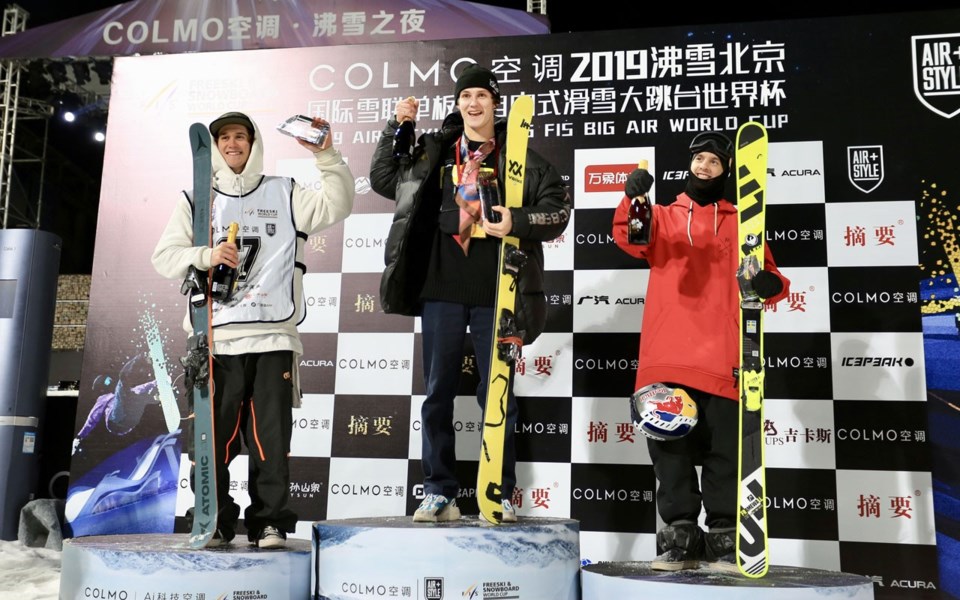 Whistler's Teal Harle was just a quarter-point away from big-air gold at the FIS World Cup stop in Beijing, China on Dec. 14.

The 23-year-old landed all three of his attempts, with his top two combining for a tally of 190.00, just 0.25 back of winner Birk Ruud of Norway. Sweden's Jesper Tjader placed third.

"I was just feeling really comfortable on the jump, I think. I felt confident going into it with some really good training days. We had awesome weather, nice warm temperatures, and just a really nice jump," Harle said. "Everything was just nice and comfy."

After spending much of his summer working at a fishing lodge in Bella Coola, Harle got back into training in September by heading to New Zealand for a month. There, he sought to nail down his switch takeoff, which he used in the Beijing competition for his highest-scoring trick.

"I tried to finally figure it out because I've been battling with it for years and years and just never really quite perfected it," he said, "but I'm feeling much better with it after that training camp in New Zealand."

The competition was held on a manmade structure in Beijing's Shougang Park, located in an industrial section on the western outskirts of China's capital. Pictures from the competition depict tall smokestacks in the background.

"It was a pretty interesting place," Harle said. "There were these weird, old, crazy structures.

"It was kind of a random place for a jump."

Harle added that, being his first time in China, there was a bit of a culture shock. It extended even to the venue, as there was an occasion where he was misunderstood.

"It was definitely an experience. I'd never been to China before and it was definitely difficult with the language barrier," he said. "The security there was quite strict. We had airport security getting into the venue, and security guards everywhere.

Another potential concern was of the air quality in the world's sixth-most populous metropolitan area. While conditions were bad upon Harle's initial arrival, they improved closer to the competition.

"The first couple days, it was very smoggy, what you would imagine if you think of polluted air," he said. "You couldn't really see anywhere, and we thought it was going to be like that for the full week, but after two days, it kind of dispersed and maybe got blown away. It turned out to be pretty good air quality for our second day of training and the rest of the week."

After taking fifth in the first big-air competition of the season in Italy, Harle now sits second only to Ruud in the overall standings. While he's eying his first Crystal Globe, he plans to take the season step by step,

"I'm always just hoping to land my runs, stick to my gameplan, my comp plan," he said. "That's all I can control and I'm happy for whatever results that'll get me."

Canadians also excelled in the snowboard portion of the big air, as Max Parrot earned a win in his first competition since being diagnosed with Hodgkin's lymphoma in January.

"The new venue is simply amazing! I actually think it's one of the best scaffolding jumps in the entire world. The jump is really big, conditions were great, and you can see it in the level of riding. It was a tough contest for sure," Parrot said in a release.

Parrot held off Sweden's Sven Thorgren and American Chris Corning for the win.