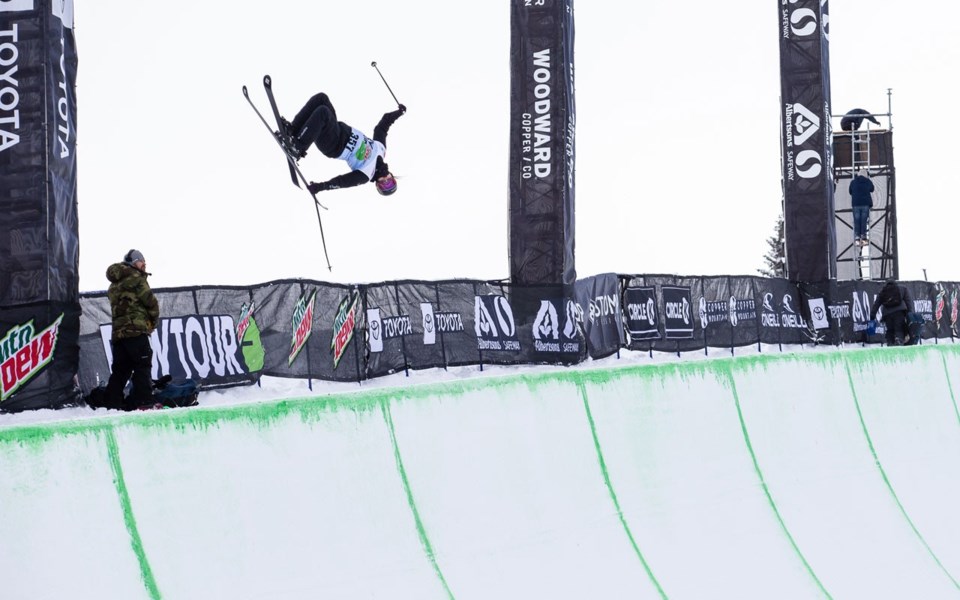 TWO IN A ROW Cassie Sharpe goes high in the Dew Tour's modified superpipe to secure her second win in as many weekends on Feb. 8.

Competing at the Dew Tour at Copper Mountain, Colo. on Feb. 8, the Whistler-based skier topped the modified superpipe final, scoring an 85.00 to best fellow Canadian Rachael Karker, who placed second with an 83.00. Zoe Atkin took third with an even 80.00.

The week leading up to the event saw plenty of unpredictability as there was one day that brought 35 centimetres of snow, causing the contest to be delayed.

As well, Sharpe hasn't generally enjoyed the modified pipe, with its quarter-pipe hits leading into a traditional pipe, but she made the most of it this time.

"I didn't love doing the modified pipe last year, so I just thought that I come out here, have fun, do my best and try to end up on top. Having fun is the whole point of doing a modified pipe," she said in a release.

Sharpe, coming off a concussion that delayed the start of her season, has now hit the podium in all three events in which she has competed, including a World Cup win at Mammoth Mountain the weekend prior.

"It's just once a year you get to do it and it allows so much more room for creativity," Bowman said in a release.

Also at Dew Tour, Sharpe's brother Darcy scored a ninth-place finish in the snowboard slopestyle final in which the top seven athletes all topped 90 points, including Canadian Mark McMorris in seventh with a 90.33.

For complete results, check out www.dewtour.com.

Read posted a 16th-place finish in the parallel giant slalom at Chamonix, France on Feb. 9 as a pair of Swiss racers topped the podium with Loic Meillard earning the win and Thomas Tumler taking second. Germany's Alexander Schmid, meanwhile, took third. Trevor Philp was the only other Canadian in action, taking 26th.

Meanwhile, Marie-Michele Gagnon was the only woman in action at Garmisch-Partenkirchen, Germany on Feb. 8 and 9.

In the previous day's downhill, Gagnon was near the back of the pack in 40th, 5.19 seconds behind winner Viktoria Rebensburg of Germany. Italy's Federica Brignone and Czechia's Ester Ledecka rounded out the podium in second and third, respectively.

Jordan scored a third-place finish in the giant slalom, 1.06 seconds back of winner George Steffey, on Feb. 6. A handful of other WMSC skiers cracked the top 30, as Riley Seger took eighth, Kyle Alexander was 14th, and Tait Jordan was 26th.

Of that group, only Seger and Asher Jordan finished the previous day's giant slalom, with Seger finishing seventh and Jordan 27th.

Lastly, in the Feb. 4 slalom, Nathan Romanin was the lone Whistler rep to finish, sliding into 19th

In women's action over at Osler Bluff, Ont., Whistler Mountain Ski Club alumnus Stefanie Fleckenstein finished just outside the top 10 in a pair of races.

In a slalom field dotted with World Cup regulars, Fleckenstein finished 13th, 2.22 seconds back of winner Roni Remme on Feb. 7.

However, Fleckenstein slipped into the top 10 earlier in the week at Georgian Peaks, Ont., placing ninth in the giant slalom on Feb. 5. In the Feb. 4 giant slalom, meanwhile, Fleckenstein and Renzoni finished 24th and 29th, respectively.

In the big air on Feb. 9, meanwhile, Legault and Finestone were 19th and 20th, respectively.

On the women's side, Juliette Pelchat came away with an eighth-place finish in the slopestyle.

On the ski side, Freestyle Whistler alums Skye Clarke and Chase Ujejski earned top-10 finishes in the big air on Feb. 7.

Clarke scored a sixth-place showing in the women's event, while in the men's contest, Ujejski was the top Canadian in eighth and Ben Lynch took 37th.

In the slopestyle contest on Feb. 5, meanwhile, Nicholas Suchy was the top local rep in 36th, while Lynch was 41st and Ujejski took 49th. Clarke, meanwhile, was 16th among women.

Whistler ski-cross racer Jack Morrow found himself just outside of the top 10 in a pair of NorAm Cup contests at Calabogie Peaks, Ont.

In the female 15-to-18 ski division, Kierstin Higgins scored a 30.63 to finish just over a point behind winner Khara Morgan-Smith (31.83) of Lake Louise.

Also in the top 10, Marcus Cordy-Simpson and Wei Tien Ho tied for ninth.

WMSC made sure the bulk of its medals stayed in the family as it hosted the U14 Teck Coast Zone Race on Feb. 8 and 9.

The local group secured 12 of the 18 available podium positions during the weekend, filled with three giant slalom races.

In the first contest, Stella Buchheister won the ladies' race while Thomas Legg, along with Joseph Gibbons and Braden Aitken, led a WMSC sweep of the men's podium.

In the second event, Buchheister and Lola Gilbert scored the top two stairs of the ladies' podium while Legg and Gibbons tied for first on the men's side.

On the second day, Gilbert and Vanessa Young took second and third, while Gibbons and Aitken wrapped up the weekend in first and third.

Chew up for KazLaw Award

Whistler mountain biking mainstay Phil Chew is up for a prestigious award.

Chew, the longtime organizer of the Westside Wheel-Up, is one of five nominees for the KazLaw Contest put on by the B.C. Bike Race.

The Westside Wheel-Up, a season-closing mountain bike event, was long a fundraiser for the provincial Para-Ski Team, which Chew used to coach.

Voting is on until March 1 at bcbikerace.com/kazlaw-contest-2020.