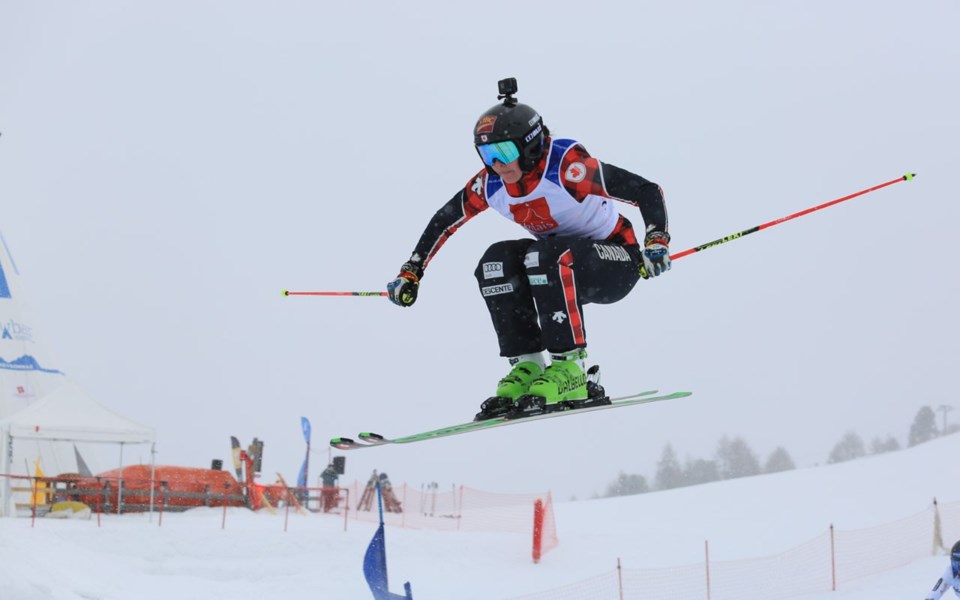 Whistler's Marielle Thompson, shown here at a March 2019 race in Veysonnaz, Switzerland, won back to back races in Montafon, Austria and Arosa, Switzerland this week. <ParaStyle:CUTLINE- credit>Photo by FIS Freestyle

In the span of four days, Marielle Thompson topped her FIS World Cup win total from 2018-19.

In Arosa, Thompson described having some up-and-down skiing in her heats before hitting her stride in finals. Thompson noted that the start section was tough to pin down, especially with minimal training time possible because of the compressed schedule.

"I snuck into the final, laid it all out in the final, and I think that was probably my best skiing of the day. I made it count when it mattered, thankfully," said Thompson, who had one World Cup win to go along with her World Championships triumph in the 2018-19 campaign.

"I just wasn't quite nailing the first start. It's kind of an uphill, quite different from what we're used to. I wasn't quite pulling with all of my strength like I should have been."

With a chuckle, Thompson added: "I just basically tried a lot harder in the final."

Thompson explained that the start section had small transitions that required smooth skiing early on. She found the rhythm in finals and chased down early leader Sandra Naeslund of Sweden to top the podium.

"I just had to make sure I did those the best I could because I knew I could be fast in that start," she said. "From there, I was right behind Sandra after the first turn, which is a good spot. I was pretty close behind her. Then halfway down the course, she made a pretty big mistake and cased a double-roller feature and lost a lot of speed. I took advantage of that."

Switzerland's Fanny Smith also passed Naeslund and held her off for second.

With some strong Swiss competitors, including hometown racer Alex Fiva on the men's side, and the change of pace of an evening event, Thompson looks forward to Arosa every year.

"The night event has a really fun atmosphere. The Swiss are great fans of skiing and with the success of their ski-cross team, they have quite a following. It's pretty cool to see all their supporters out there, and they're not just cheering for Switzerland, they're excited for everyone out there," she said.

At Montafon, meanwhile, Thompson overcame tough weather conditions including fog and heavy snowfall. Like Arosa, there was a technical start, meaning Thompson employed a similar strategy to get out of the gate quickly.

"In my first two rounds, I was pretty quick. In my semi, I wasn't the first out, but I had to make a pass in the second turn and hold it all the way to the end to get myself to the final," she said. "In the final, I pretty much led top to bottom. I had a pretty fast start and with all that fresh snow, we had to skate after the start feature. I skated as fast and with as much power as I could."

In men's action at Montafon, two Canadians made the podium as Switzerland's Ryan Regez topped Mahler and Leman, in order. Drury also starred, winning the small final and placing fifth.

Thompson and the Canucks will wrap up the pre-Christmas portion of the schedule with back-to-back races at Innichen, Italy on Dec. 21 and 22. After finishing off the podium in the first two races of the season in Val Thorens, France, Thompson is thrilled to be back to her winning ways.

"It's nice to know that I'm skiing well, can be fast and competitive," she said. "I've really enjoyed the Innichen course over the years. It's the place where I had my first podium [third in 2011].

"Hopefully, I'll take some momentum into that, try to keep skiing well and make sure I'm doing everything I can."

Thompson acknowledges the schedule is challenging, with six races in about two-and-a-half weeks, but it's a fun way to start the season.

"I have to really make sure I'm managing my recovery and making sure I'm doing all of my workouts to make sure I keep my strength up," she said.