Winterhawks gearing up for provincials 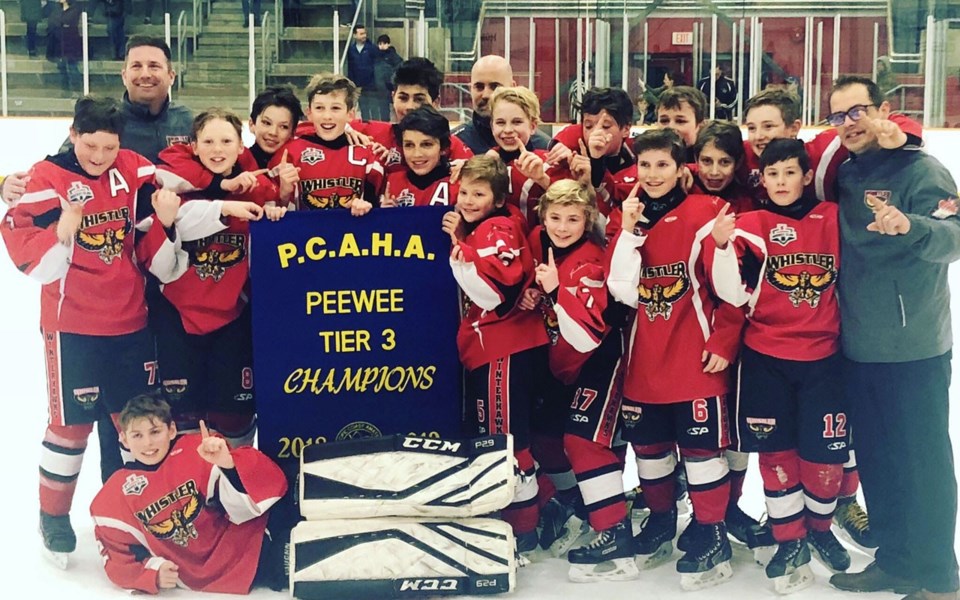 SOARING HAWKS The Whistler Winterhawks peewee 'A' team won the Flight 5 banner and is one of three local teams heading to provincials. <ParaStyle:CUTLINE Styles\:CUTLINE- credit>Photo submitted

The Whistler Winterhawks peewee 'A' team already has a number of trophies on its mantle and is looking to acquire one more.

The squad downed the North Shore Winter Club in the Flight 5 final four tournament earlier this month to punch its ticket for BC Hockey's Tier 3 provincial tournament in Powell River starting Sunday, March 17.

Head coach Tim Knight said making it to the tournament was the Winterhawks' goal from the outset.

"It was definitely our goal to be here, but it was the goal of a lot of teams to be here."

Knight described the team as relentless, with waves of pressure capable of wearing down opponents. With a week-long break away from the rink, Knight is looking to reinforce that style before heading to the Sunshine Coast.

"If we play the right way, usually the scoreboard represents that. We're reiterating that if we stick to what makes us us, good things happen," he said. "We're a tenacious checking team. We're fast for the most part. We think fast. We attack hard as a unit.

"We've got good pieces to our puzzle throughout. We can grind a game down to be 2-2 and we've got guys who can break games open. We've got a goaltender who's absolutely solid in net so he gives us a chance to win every single night."

Over the course of the season, Knight saw the Winterhawks' puck management and game awareness improve, but the most important development was coming together as a "band of brothers" who has one another's backs.

"Near the end here, overcoming some of these big challenges that we had, they look like they're two to three inches taller. They're not two to three inches taller than they were at the beginning of the year, but they look a little bit different. They stand a little bit different and they have a swagger to them," Knight said. "It's been fun to watch."

The confidence was clear even before the final four tournament, as the Winterhawks had to overcome a tough challenger in Mission to even qualify. However, surviving that gave Whistler a boost, which he hopes will continue into Sunday's opener against Castlegar.

"Right now, we're prepping and we envision ourselves being at the base camp of Everest," he said. "We're looking at the peak and saying, "Getting to this point is quite an accomplishment, and we're all proud ... but we've got to refocus and re-plan for the task at hand.'

"We're trying to get everything going in the right direction again."

Two other squads with Whistler representation are also off to provincials after taking the runner-up position in their respective divisions. The bantam 'A' Winterhawks took second place in Tier 3 and will head to Port Hardy to open against Cranbrook on Sunday, and the midget 'A' Squamish team will head to Cranbrook and face off with Salmon Arm on Sunday.