Whistler’s Robbie Dixon among racers expected to compete
Nov 28, 2008 7:17 AM By: Andrew Mitchell 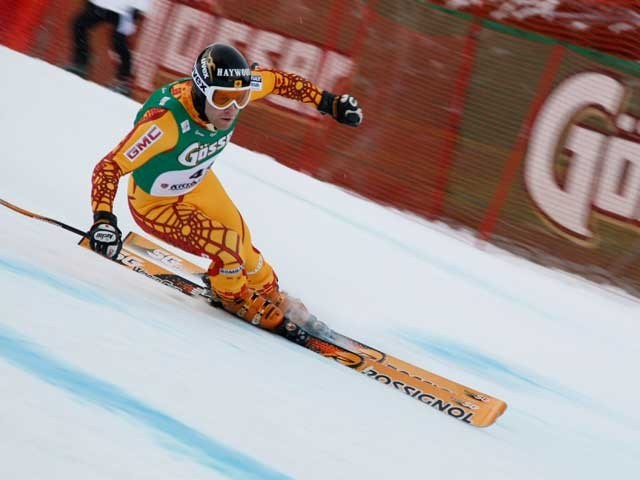 There have already been two World Cup events in Europe, but for many top ski racers the season doesn’t being until the Bombardier Lake Louise Winterstart World Cup races. The men will race two events, a downhill and super G, on Nov. 29-30, while the women will race two downhills and one super G Dec. 5-7.

For the Canadian Alpine Ski Team, Winterstart has raised the bar in terms of breakthrough performances. In 2006, John Kucera won the super G on the men’s side, while Whistler Mountain Ski Club alumnus Manuel Osborne-Paradis won silver in the men’s downhill. Kelly Vanderbeek also placed third in the women’s super-G, and Canada went on to have its most successful season ever with 14 World Cup medals and 45 top-10 finishes.

In 2007, Jan Hudec won gold in the men’s downhill, and Whistler’s Britt Janyk was third in the women’s downhill — the first podium of her career.

Heading into 2008, expectations are high for a team that’s no longer content to break the top-30, or even the top-10.

“Two year ago was huge with lots of podiums and lots of points, but although we didn’t get as many podiums last year we were further ahead in World Cup points than ever before,” said Paul Kristofic, head coach of the men’s program. “It was also our goal to increase our consistency at every venue last year and we pretty much did that. This group, average-wise is still young on the World Cup, and it really helps to be consistent at all the venues and across all the disciplines. But more than consistency, I think the team is really hungry for podiums. Top-10 is nice but they’d like to hit the steps.”

Three Canadian athletes are pre-qualified to race at Lake Louise, Osborne-Paradis, Erik Guay and Kucera. The team will also do its own internal qualifications during the training runs for the World Cup events, which will include athletes like Whistler’s Robbie Dixon, Gareth Sine and Jeffrey Frisch.

“If we just continue on the same path we’re currently on we’ll see a lot of our guys qualify early this year, so that is not a huge target for us,” he said. “We take it one race at a time, and do everything we can to win at every race. Obviously a big target is the World Championships, which is taking place at the same time as the Olympics in 2010. We’re going to see if we can get the timing down right, and have athletes peaking and putting in their strongest performances then.”

For Dixon, the season really began back in May at the start of a three-month dryland training program. The team also attended a camp in Argentina, two camps in Chile — the second of which he said took place with perfect conditions alongside the Norwegian team — as well as a training camp in France.

Dixon is now at Lake Louise, getting in some GS training on sections of the downhill course that are open. More snow will be helpful, but he says the resort has done a good job with early season snowmaking to ensure that most of the run is ready.

Dixon’s first start was in the opening giant slalom at Soelden, Austria in October. He went off course, but said he was having a strong run up to that point.

“The conditions were just perfect, with bulletproof, rock-hard snow, it was a sunny day, and things were going pretty well when I blew out,” he said. “I just tried to punch it… and made a mental error coming out of a steep section.”

Dixon says the team is feeling fit after a summer of training, but skiing skills are a little rusty. “We basically spend six hours in the gym a day, two sessions a day from Monday to Friday with weekends off. Definitely you come out of that with your fitness level up and your skiing skills a little down,” he said. “It’s funny, by the end of the tour in March you’re skiing is really fast, but your fitness has really dropped off.”

Dixon says he and his teammates are feeling confident going into Winterstart, especially with their recent track record at Lake Louise. “We’re just really antsy to get started, we want to get that first race under our belts,” he said.

“For myself, I want to keep my skiing moving in the right direction, like the second half of last season when I started to show some good results in races,” he said. “As long as that happens, qualifying won’t be a problem. I just take each race individually and make the best of every opportunity I get.”

Dixon had a breakthrough year last season, with a fourth place finish in a super G in Norway, and a 14 th place SG finish at home in Whistler during the World Cup test event. He also cracked the top-30 for the first time in downhill.

The women’s team will be announced next week.