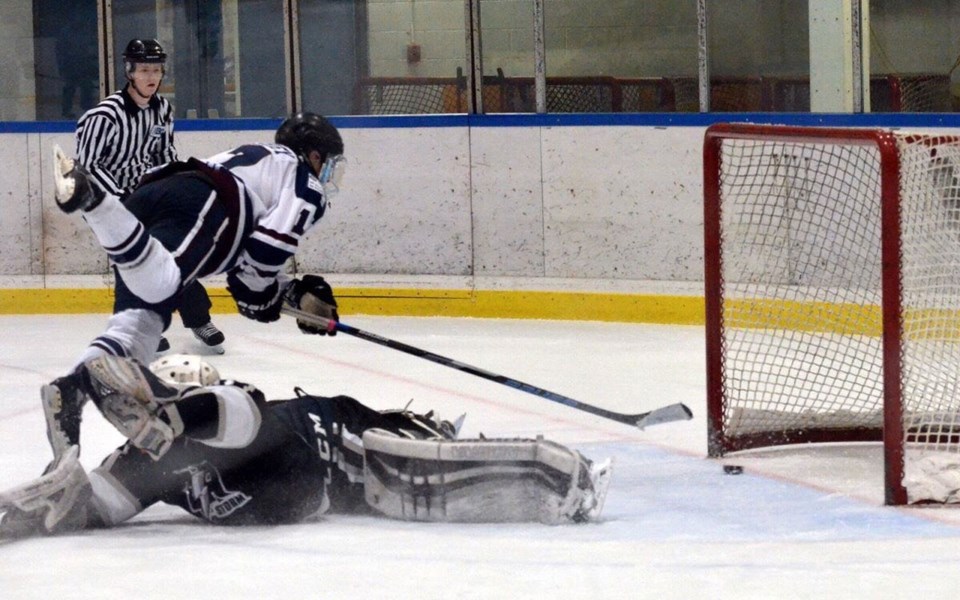 Coming off the disappointment of being cut from the British Columbia Hockey League's Victoria Grizzlies, Finn Withey returned to the Vancouver Island Hockey League's Comox Valley Glacier Kings with something to prove.

He also came back to find that the 'A' on his sweater had been replaced with a 'C.'

"I love the responsibility of it," said Withey, who's now in his third season with the club. "I wasn't expecting to be here at the start of the year. I was hoping to play Jr. 'A' but I ended up here. I was told by coach I'd be captain and it's been great. I've had a good time doing it."

While it's been challenging for Withey to return to the Jr. 'B' Glacier Kings, it hasn't helped that the struggling club just picked up its first win of the season on Oct. 27 in a 4-3 overtime triumph over the rival Campbell River Storm. The victory snapped a 0-31-1 stretch dating back to Dec. 16, 2017, when Comox Valley defeated the Kerry Park Islanders 3-2 in overtime.

Withey, appropriately, scored the winning goal to break the skid. He recalled, however, that his reaction was less one of glee and more one of relief.

"It was pretty stressful. I missed two breakaways in a row right before it and that was the third one," said Withey, who is now up to nine goals and seven assists in 14 games so far as he's been held off the scoresheet just once. "There's a lot of pressure to put that one in and I managed to do it."

Scoring that kind of goal is how Withey said he likes to prove himself as a leader, especially in the face of on-ice struggles.

"I'm not too vocal in the dressing room. I don't like to get mad at people but I'll say something if it's necessary," he said. "It's been tough. We had a slow start, but recently, we've been doing a lot better."

Considering Withey wrapped last season with the Grizzlies, scoring two points in two regular season games and adding another pair in 10 postseason games, it wasn't a stretch to expect to be in the provincial capital for this season, too.

"It didn't quite work out in main camp," Withey said.

Glacier Kings head coach Jordan Kamprath said despite facing trials and tribulations so far this season, Withey has served well as captain and provided a huge boost for the club.

"It's been a frustrating start. We have a young team and a lot of rookies on the team who look to the older players and the more experienced players," he said. "Whether it's a 1-1 game or a 7-1 game against us, he plays his heart out and it's something that's changed the mentality of this team and kept the spirits up.

"On the ice, he's our guy that goes out there and shows by example. He throws the body around, he makes sure the puck gets out (of the defensive zone) every single time and he has that goal-scoring touch. He gets in the right spot at the right time and it's going to go in the back of the net."

Both captain and coach said the Glacier Kings are making progress, as the games have become more competitive.

"At the beginning, we were playing catch-up the whole game while now, we're competing the entire 60 minutes," Kamprath said.

Kamprath explained he uses Withey regularly on the powerplay, though less so on the penalty kill just to avoid overworking the 19-year-old.

"If I want something to happen, I put him out there, no matter the situation," he said.

Withey noted he's been granted new opportunities on the man advantage as he's played on the blue line to quarterback the attack, allowing him to further develop his skills.

Withey said Kamprath has been a booster for him, reaching out to Jr. 'A' teams looking for a fit. A couple clubs are tracking his progress and he's hoping for a call-up later in the season.

"He should be up in Jr. 'A' in my personal opinion and it would be awesome if a Jr. 'A' team would snag him," Kamprath said.