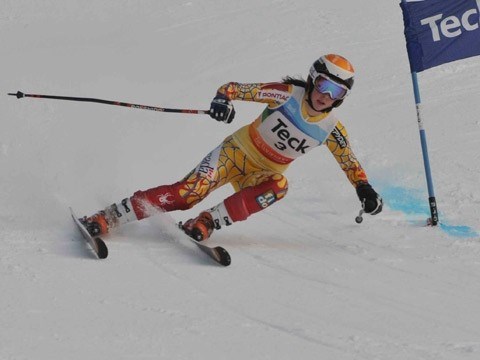 The trip was well worth it, with the team sweeping three out of four podiums and earning all but one of the medals up for grabs in back-to-back giant slalom races.

On Saturday, the WMSC boys took all three podium spots. Marc Leroux posted the fastest time on both runs, one minute, 36.94 seconds, to finish nearly a second ahead of teammate Dalton Pehota (1:37.92), while Pehota was over a second faster than Riley Seger (1:39.15).

"It felt really good this morning, and I felt really energized even though I didn't have a good sleep," said Leroux. "It felt like a good day and I went for it."

Rounding out the top 15 were Jeffrey Cadman in fifth, Max Peiffer in seventh, Alex Gershon in eighth, Charlie Tuer in 12th and Antoine Carignan-Turcotte in 14th.

Also in the top 15 were Sabrina Wong in sixth, Emma Swaffield in seventh, Anna Yamaoka in eighth, Cheyenee Ling in ninth, Claire Baragar in 10th, Siobhan Finan in 11th and Amelia Smith in 13th.

"Really proud of the kids today," said coach Rob Boyd. "There were a lot of them who pushed outside their comfort zone and some had performances that surprised them as well as us. There were some mishaps and DNFs. That's what happens when you really push the limits and see what you're capable of."

The second day of racing also resulted in a sweep for the men's team, with Marc Leroux on top once again in 1:42.15, by a comfortable margin. Riley Seger was second in 1:42.97 and Carson Llewellyn third in 1:44.49.

Rounding out the top 15 were Alex Gershon in sixth, Max Peiffer in seventh, Jeffrey Cadman in eighth, Hugo Ng in 11th and Cooper Yates in 15th.

Kelly Steeves also won day two in 1:44.34, once again with a cushion of around three seconds. Mikayla Martin took the silver medal in 1:47.31.