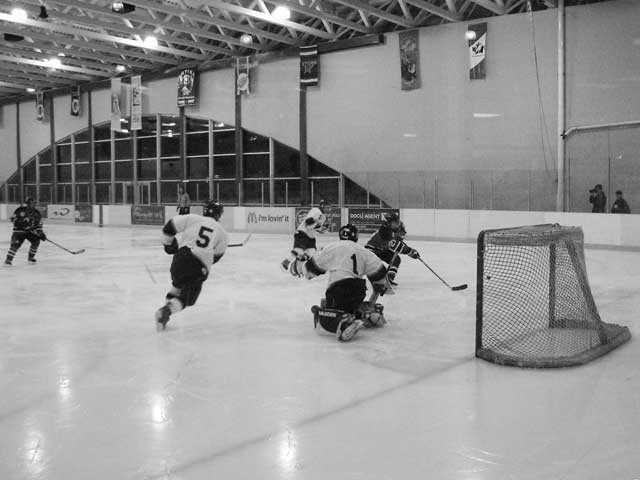 Eye on the puck Wolf Pack goalie Graham Hallenbeck turns aside a breakaway shot early in the second period on Friday night. Hallenbeck only let in one even strength goal in a 5-1 loss to the North Delta Devils

The Meadow Park bleachers were filled and fans lined the glass on both sides of the rink when the puck dropped on Friday, as the Squamish Wolf Pack hosted the North Delta Devils in Whistler.

The Wolf Pack is playing two games in Whistler this year to drum up support from Sea to Sky residents and showcase local talent from Whistler and Squamish. The next Whistler game is Jan. 2 against the Port Moody Black Panthers.

Unfortunately for the Wolf Pack they got behind 3-0 in the first period on Friday, and were outshot 17 to 3. The Devils added their fourth goal less than five minutes into the second period.

The play evened up in the second period when Brandon Pfell put the Wolf Pack on the board, making the score 4-1.

Squamish goaltender Graham Hallenbeck faced 34 shots in a losing effort, but played well enough to again be named as a star of the game.

The Wolf Pack played another game over the weekend, hosting the Aldergrove Kodiaks on Saturday night.

The Wolf Pack started strong, and were up 2-1 by the end of the second period, but ended up losing 5-2 after allowing four unanswered goals in the third period — two of them on the powerplay. That put the Wolf Pack last in the Tom Shaw Conference of the Pacific International Junior Hockey League with just one win in eight games.

Although it’s been challenging, Wolf Pack coach Matt Samson was happy with the game in Whistler and is confident that things will turn around for the team in the future.

“Playing in Whistler was a lot of fun, it was a great experience for our team and for North Delta, who said they had a great time and were treated first class,” said Samson. “Overall we’re really happy with the facility and the crowd, and I thought it was a pretty good game. It was tough that they potted three powerplay goals off the start, but I thought we had a good third period and made things interesting. I would have liked two points, that’s for sure.”

Samson says the Wolf Pack, which is an expansion team, is still a work in progress but things are starting to come together.

“We’ve made some personnel changes, we’re playing with the lineup a bit, but we’re definitely more competitive now in most of these games. It’s just a matter of playing the way we can play for a full 60 minutes, but I expect in a couple of weeks we’ll have our lineups down, and we’ll be in a position to put together a string of wins.”

Samson’s goals for the expansion team are modest: to make the playoffs. All but two teams in the league qualify each year, and there are still 40 games left on the schedule.

“The biggest thing for us is that we’re an expansion team,” he said. “Some of the players have played together before but most of them haven’t, and it’s always a big change for players on a new team in a new league. It’s a matter of learning, getting everyone on the same page on the forecheck, which is tough because we’re switching around the lines too, which also makes it tough for the guys. On other teams the guys have played together for years, so they know where the others are going to be on the ice. We’ll keep switching lines game by game until we find the right combination, but it doesn’t make it easy.”

There are three Whistler players on the Wolf Pack, including Clemiss. Brandon Combs and Josh Schaubroeck also made the cut.

Samson was happy to see Clemiss get on the board on Friday.

“He played well, we’re happy with him. We’ve been bringing him along slowly because he was battling hard through an illness at the start of the season and he’s just getting his legs back and working his way back into the roster,” said Samson. “I think he was thrilled with the ice time he was getting, and that he got a point in front of his home crowd.”

On Tuesday, the Wolf Pack played the Delta Icehawks at home.