20 years of momentum WORCA president Todd Hellinga stays low out of the gate in the Avid Chainless Downhill at Worcapalooza last Saturday.
Sep 4, 2009 8:05 AM By: Pique Newsmagazine Staff 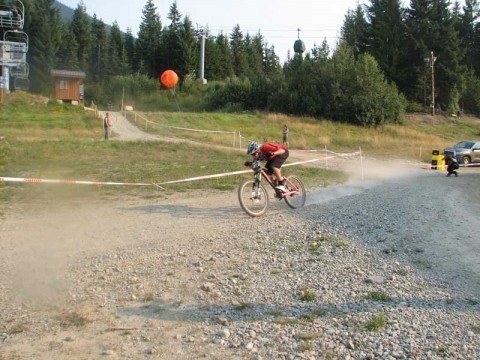 The Whistler Off Road Cycling Association celebrated its 20th anniversary at Worcapalooza Saturday, with a wide range of fun contests taking place.

The events included a chainless downhill, a criterium, a hill climb and a track stand contest.

As advertised, the chainless downhill took place on a generally flat course starting just above Base II where it was a challenge to maintain your speed and momentum. To put it into perspective, three minutes was an average time on the course, which is about the same time as an average length World Cup race.

Sponsored by Avid, with Whistler Blackcomb providing the race timing, almost 70 racers took part. Curtis Keene won the men's race with the fastest time of the day, 2:18.26. He was followed closely by Chris Johnston in 2:18.90 and Dylan Wolsky in 2:20.26.

The criterium took place on a short course, with Matt Ryan winning the event fairly handily.

In the hill climb, participants who managed to make it to the top of a steep, loose pitch above Base II squared off in a race to the top of the same slope. Greg McDonnell was first to the top in that event.

Michael Isaac won the track stand competition handily, getting off his bike after standing in place for more than 10 minutes. Sean Dinwoodie was second with more than seven minutes free-standing, with Jerome David a close third. There was supposed to be a balance-off but the other riders ceded to Isaac who probably could have stayed up all afternoon.

The event also included a barbecue, beer garden, activities for kids, Lucia Gelato and live music, leading up to the premiere of a documentary film on WORCA's first 20 years.