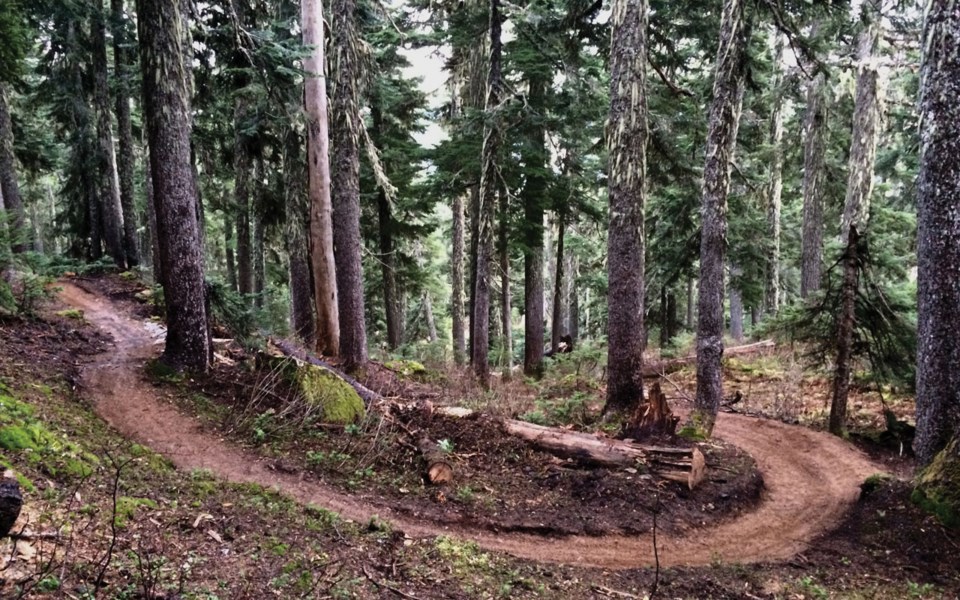 The Whistler Off-Road Cycling Association (WORCA) has been able to keep pedalling through the pandemic.

Despite taking a major hit when its fee-for-service agreement with the Resort Municipality of Whistler was slashed by two-thirds, WORCA has held some successful fundraisers to keep other projects going.

Heading the list is that WORCA surpassed its $10,000 goal for the Chipmunk Rebellion trail, garnering $10,444 to pay trail crew for the construction of the upper section of the exit for Lord of the Squirrels.

In his July 17 trail update, lead builder Dan Raymond said the section is coming together.

“I’m really happy with our progress so far!” he wrote.

Another fundraiser, held in conjunction with We Run Whistler and lululemon, is ongoing through the Trails For All campaign. Designed by Pique’s own Lou O’Brien, the shirts, available for $48, will provide another boost to WORCA. For more, visit amilia.com/store/en/whistler-off-road-cycling-association/shop/products/7678674.

Lastly, Santa Cruz Bicycles has donated two Heckler e-bikes, valued at more than $22,000, for the trail crew to utilize.

When he set out on his bike from Whistler for Winnipeg on June 19, Jason Loutitt was open to the idea of carrying all the way on to the East Coast.

That’s what the world-class ultrarunner ultimately did, reaching Halifax City Hall on July 11, blowing past his original turnaround point, the Canadian Museum for Human Rights in the Manitoba capital, reaching the opposite side of the country in 21-and-a-half days. The journey covered nearly 6,000 kilometres and he’s now on his way home.

“I’ve been very lucky not to have any big mechanical problems. I only had one flat tire and broke only one spoke,” he said from eastern Ontario, where he was taking a day off, on July 16. “I’ve had more things happen on one training ride going to Whistler.”

Louttit has also managed to avoid major injuries, taking a day off in Regina when he started to feel some nagging issues and holding up well the rest of the way.

“Sometimes I would stay in a cheap hotel if I needed to prioritize recovery, but sometimes I was camping on the side of the highway, so it’s been pretty adventurous. It’s been exciting to see new places,” he said.

During training, Louttit’s biggest days were the 260 km covered during a round trip between Vancouver’s Kitsilano neighbourhood and Whistler. However, he managed to nearly double that some days on the flat prairies, racking up days of 400 or even 500 km.

There have been challenges along the way, Loutitt said, as temperatures on roughly half the days have exceeded 30 degrees. However, his decade practising hot yoga helped him weather the heat.

As he makes his way back, Loutitt has several missions for the challenge, as he is raising money for the Squamish Helping Hands Society’s Under One Roof program, while as a Métis man, he is hoping to give a boost to Indigenous rights and environmental awareness.

“I thought about it in terms of, ‘Often, during times of great trials, there are great opportunities,’ and this is a chance to inspire people that are stuck at home,” he said. “I’ve already got so much great feedback from that in terms of people either buying a bike or being really impressed by what I’ve been able to do.”

To support Loutitt’s Under One Roof initiative, check out canadahelps.org/en/charities/squamish-helping-hands-society/p2p/UnderOneRoof. He has also set up a separate GoFundMe to help cover some of his costs incurred along the way at gofundme.com.

While he’s not riding with an official deadline, Loutitt is hoping to complete the east-to-west trip in 25 days.

“When I turned around and started coming back, it was my victory lap, so to speak,” he said. “There is quite a bit of a difference getting into some of the prevailing winds. My first day going into the wind, coming back from New Brunswick, was a little, not disconcerting or disheartening, but I felt so good the next day. I look forward to the challenge.”

BC Hockey Hall of Fame calls for artifacts

The BC Hockey Hall of Fame is looking to expand its collections.

Earlier this month, the Penticton-based Hall put out a call for items showcasing the province’s rich hockey history, including sticks, pucks, jerseys, photos, equipment, game programs or other memorabilia. Hall of Fame executive director Blain Ford said there aren’t any specific items that they’re after and encourages those open to donating or lending items to contact him at executive.director@bchhf.com or 778-559-3263.