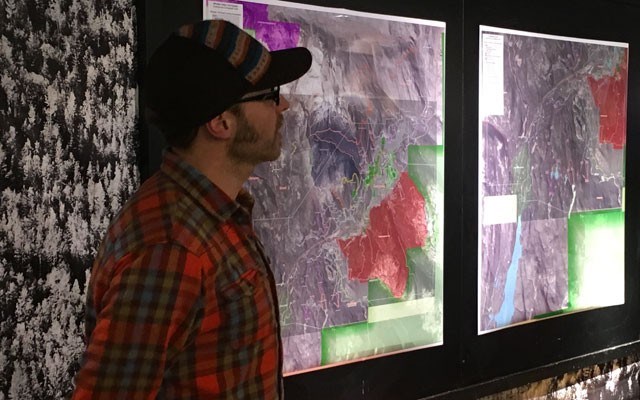 As mountain bikers search for new adventure, the Whistler Off-Road Cycling Association (WORCA) is banking on the resort's southern edges to be the next big thing.

At an open house at Forlise on March 2, WORCA director of planning Todd Hellinga said Cheakamus Crossing is a major focus for new trails in the coming seasons.

"It's really about focusing on intermediate trails that are fun for a wide range of users. Maybe they're blue trails but even an advanced rider is going to have fun doing it," he said.

With the Sproatt Alpine Trail up and running, Hellinga explained there is an emphasis now on creating safe links to help riders explore as many options around the resort as possible to maximize the time, effort and money put into each individual trail.

WORCA president Craig MacKenzie explained the time was right to hold such an event. He noted the Resort Municipality of Whistler (RMOW) last made a plan about a decade ago, but it hasn't been in their budget to revisit the trails master plan since then. MacKenzie noted that the need to make a plan, combined with Whistler Blackcomb (WB) concerns around trail building on their property, helped spark the open house, as well as led to a focus on the Cheakamus area.

"A lot of our great trails have started as unsanctioned trails, and maybe they're adopted or maybe they've been updated. We don't want to temper that enthusiasm and artistry of their trail building, so what we're trying to do with some of these sites in the Cheakamus area is that we might get an approval for a 10- or 15-foot-wide corridor and tell an enthusiastic trail, 'There's the start, there's the end, there's the sides. Build your trail.'

"It would be to the community standard, but they'd have the expression. It would be their trail, their idea, their philosophy behind it.

"We want to harness that energy in a way that works for everybody."

During the meeting, Hellinga said that those who have an idea for a trail on WB property should pitch it to the company rather than build it without approval. WB did not make anyone available for comment before press time.

Hellinga noted he hopes to see feedback from all trail users, noting many mountain bikers, himself included, aren't cyclists exclusively.

Another subject WORCA addressed was the increasing popularity of e-bikes, which have an electric motor that can help riders through tricky sections. MacKenzie said e-bikes won't be allowed in WORCA events, and they are otherwise outside of the association's bounds.

"We realize there are people that are using e-bikes but for insurance purposes, they're not allowed at any of our functions, at any of our activities," he said.

"There are concerns if you have them in a ride. You want to see that people are people-powered and they get where they should based on skill and their ability. E-bikes make that mix different.

"We don't know the effects on trails yet, but from a trail-building concern, if everybody is relying on human power, you can expect a certain number of rides up a hill, down a trail. But you don't get tired on an e-bike, and you would expect trail use is higher.

"It's not that we're against them. It's just that it's not within our mandate."