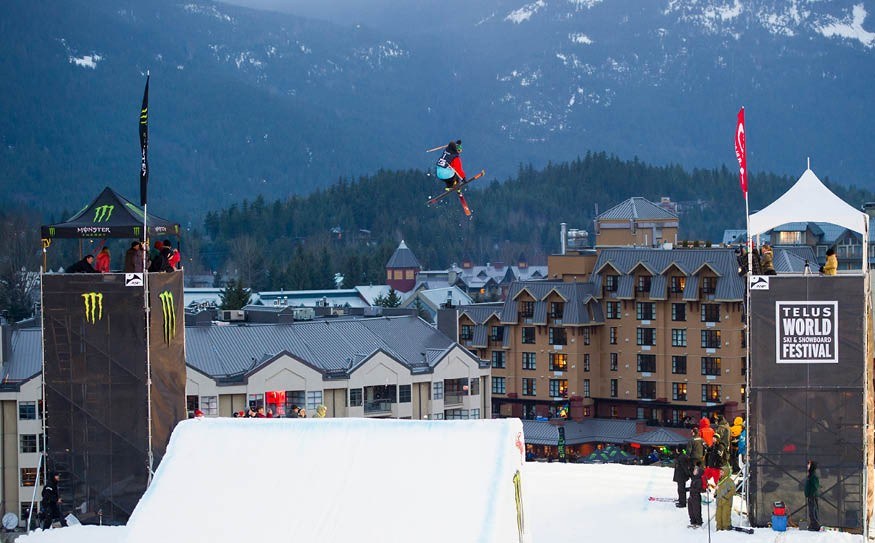 the air up there The popular World Ski and Snowboard Festival Big Air event is set for Saturday night. file Photo BY mike crane/courtesy of Tourism Whistler

At its core, the World Ski and Snowboard Festival (WSSF) is a farewell party of sorts to the previous ski and snowboard season and a pep rally to get people excited about next winter. It's a celebration of life for people who have based their lives, to some degree on snow sports. It's a ritual, an affirmation, a moveable Mardi Gras, a cultural zeitgeist, the final binge before the cleanse.

Snow sports have always been one of the festival's major pillars, and at one point or another every major star in skiing and snowboarding has been part of the events. The events themselves change and morph over the years, from pro to grassroots to pro again, and in the last few years the festival's sports program has been elevated to the status it deserves.

The World Skiing Invitational, the first major "new school" freeskiing event in the world, is now the Association of Freeskiing Professionals (AFP) championship event. This year the top skiers in the world will be here to vie for overall titles, points and prize money in slopestyle and big air competition.

The Shred Show snowboarder events include a five star World Snowboard Tour slopestyle competition, which actually kicks off the 2013-2014 season for the tour.

New this year, the festival is also playing host to a roller derby competition, featuring Whistler's Black Diamond Betties and the Squamish Sea to Sky Sirens.

This year the World Skiing Invitational is kicking off the WSSF, with a big air competition on Saturday night, April 13 at the base of the mountain, running from 5 to 7 p.m.

There's a 30-man elimination round with each athlete getting two jumps and their best score counting. The top eight from that round will move onto the superfinals and will get two more jumps. The top score overall wins $5,000, with second place earning $3,500 and third $1,500.

The invite list is a who's who of pro athletes, including current AFP leader Gus Kenworthy (3,424 points) of the U.S. and runner-up Vincent Gagnier of Canada (3,147). Gagnier could actually take the title with a strong performance in Whistler, providing that Kenworthy has an off day — which he almost never does.

Other athletes in the running include Kiki Jossi Wells, Henrik Harlaut of Sweden, Alex Schlopy of the U.S., Oysten Braaten of Norway, Russ Henshaw of Australia, Mikkel Joraandstad of Norway, Lars Bjorum of Norway and James Woods of Great Britain. The top 10 on the world tour are an international cast to say the least.

Other Canadians to watch for include Alex Beaulieu-Marchand, Noah Morrison, Charles Gagnier and TJ Schiller.

As for what spectators can expect, the new standard is triple-corked tricks — variations of spin tricks with three variations of flips or shoulder rolls where skis are higher than the athletes' heads. They'll be coming in, and landing switch for extra points.

Athletes also come up with some surprising moves, like long floating front flips, switch backflips to switch landings and combination tricks where athletes will fit two distinct variations of tricks into a single jump.

A lot will depend on the jump and the conditions — if snow is soft then athletes will have to work harder to gain speed — but the athletes never fail to put on a show.

Local DJ Mat the Alien will be providing music during the event, to be followed by a live performance by Nas, one of the most widely known and renowned hip hop artists of all time. In other words, expect a crowd.

The slopestyle competition takes place Sunday and Monday in the Nintendo Terrain Park on Blackcomb. The sport is now in the Olympics, and while there aren't any AFP points up for grabs a strong result in the AFP championships can help athletes get selected to the national team.

On the women's side, Canada has three of the top five women in the world right now with Kaya Turski ranked first, Dara Howell in second and Pemberton's own Yuki Tsubota in third.

Turski won't be in Whistler for the event, but Howell, Tsubota, Emma Whitman (ranked seventh) and Nikki Blackall (ranked 11th) will be representing Canada in the women's event.

There are lots of great places to watch the event. The rails are mostly on the top section, while the bottom of the course has a 75-foot (23 metres) table called "Kong."

The Monster Shred Show is also promising to be big with two World Snowboard Tour, five-star sanctioned events (one step down from the highest level six star contests), and the return of the Boarderstyle.

The Boarderstyle — a combination of snowboardcross and slopestyle where athletes can advance by throwing down big tricks on the air features — takes place on Thursday, April 18 on Blackcomb Mountain. It's one of those events that doesn't seem like it should work, but athletes take it pretty seriously and the mix of speed and skill is impressive. All of the athletes are expected to ride a mandatory rail mid-course, and spin at least one rotation on the final jump.

Next up is the World Tour sanctioned slopestyle on Friday, with the qualifiers from 11 a.m. to 1 p.m. and the finals from 2 p.m. to 3 p.m.

This is a men's competition and there is $25,000 up for grabs — $15,000 for first, $6,000 for second and $4,000 for third. With that much money there's a good chance we could see some of Canada's top athletes turn up. As it is, the list already includes Robby Balharry, Dustin Craven, Sage Kotsenburg, Matts Kulisek, Maxence Parrot, Dary Sharpe, Mark Sollors, Antoine Truchon, Eric Willet, Mike Ciccarelli and others. In other words, it's a pretty all-star group.

The evening gets underway with a live performance by Trouble Andrew — actually former pro rider Trevor Andrews — at 6:30 p.m., with the qualifier starting at 7:30 p.m.

The qualifier will give all 30 invited riders two runs of the course, with only the best run counting. Judges will pick the top 12, which will be whittled down to six riders and then three, with the final round determining the overall ranking. The top three riders will make at least five jumps over the course of the evening.

Vengeance in the Valley

The WSSF has never been shy when it comes to taking chances or showcasing things that are a little bit different, and the Vengeance in the Valley roller derby bout is a prime example.

Set for Monday, April 15 at the Whistler Conference Centre, the doors open at 7 p.m. and first bouts get underway at 8 p.m.

If you've never seen roller derby, which can seem like two group of girls in fishnets pummelling one another on roller skates, it's actually a very tactical sport. For an explanation of how it works, and how teams score points, visit www.wftda.com/rules.

The cost is $15 and the event, it goes without saying, is licenced.